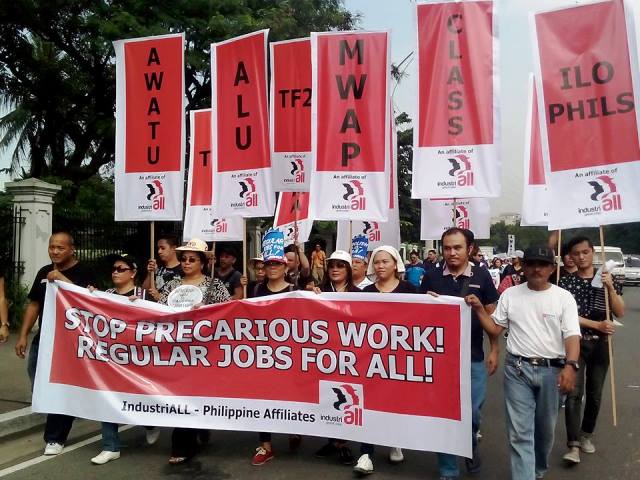 “As humans, we are supposed to work in order to live. But corporate greed made us live just to work for capitalists,” Oliquino.

MANILA – Filipino unionists from Metal Workers Alliance of the Philippines (MWAP) joined the Global Day of Action to STOP Precarious Work on Wednesday Oct. 7, by marching to the headquarters of the Department of Labor and Employment (DOLE) and holding a protest action in front of its offices. They asked for a dialogue with Labor Secretary Rosalinda Baldoz, but were met instead by Labor Undersecretary Rebecca Chato.

This is the statement read by MWAP during the group’s protest. A national alliance of unions and workers in the electronics, automotive, mining, shipbuilding, metal, steel and related industries, MWAP is an affiliate of the IndustriALL Global Union, which held in other countries their own protest on Global Day of Action to STOP Precarious Work.

MWAP demanded the abolition of the Philippine labor department’s D.O. 18-A, which it blames for why labor flexibilization schemes are gaining headway at the expense of their wages and safe working conditions.

“Approximately 70 to 80 percent of the workers, especially in the economic zones, are contractuals. Majority of them are women. They get lower wages, receive no benefits and are treated like disposable rugs the capitalists can get rid of anytime they want. They are subjected to inhumane conditions and are often discriminated. Their fundamental rights to join or form unions and have a collective bargaining agreement are not being respected,” said MWAP Secretary General Christopher Oliquino.

Nationwide from 2008 to 2012, conservative estimates based on government data show that non-regular and agency-hired workers have increased from 37 to 44 of every 100 Filipino workers, according to non-government thinktank Ibon Foundation. The share of regular employees to total employment, meanwhile, decreased from 72 to only 56 of every 100 Filipino workers. Corporate profits during the same period increased hundreds of times, but wages hardly changed.

Oliquino said they got nothing out of their dialogue with Labor Undersecretary Rebecca Chato. In an interview, he told Bulatlat.com the labor official who met with them repeatedly stressed during their talks the need to listen also to the “sentiments of the employers.”

“They’re more concerned with what the employers would say,” Oliquino said.

MWAP brings together various labor federations from the moderates to the progressives. In MWAP, they united in calling for the said department order’s abolition.

Unfortunately, the Labor Undersecretary “does not have a clear response to calls to at least minimize, let alone abolish, its contractualization policy,” Oliquino said.

MWAP underscored the precarious situation of the Filipino workers today, as exemplified, they said, by low wages, massive contractualization, unsafe and inhumane conditions at work, and violation of workers’ rights.

Oliquino, who is also union vice president of workers in Honda Cars, said MWAP will bring the issue of stopping contractualization to prospective presidential, senatorial and congressional candidates.

“As humans, we are supposed to work in order to live. But corporate greed made us live just to work for capitalists,” Oliquino said.