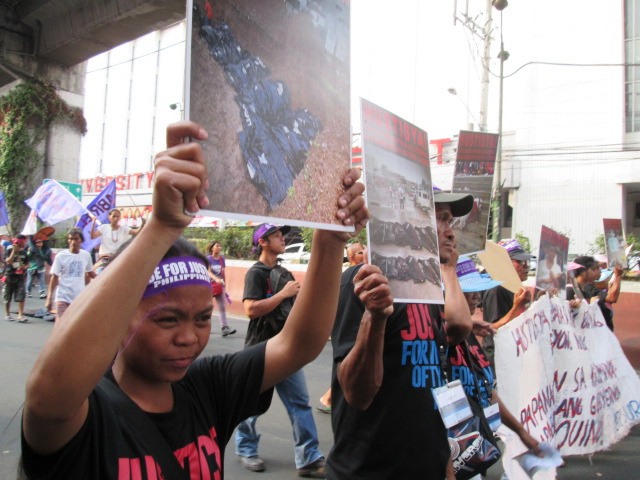 “Yolanda victims are still without aid, still living in bunkhouses, yet the government is prioritizing the building of tide embankments, and hotels.”

MANILA – Nearly two years since supertyphoon Yolanda battered eastern Visayas, the typhoon survivors held a regional conference in Tacloban City to take stock of their rehabilitation, or the lack of it, and to let the country know about their real situation.

“It took one year for Aquino to release the rehabilitation master plan. But instead of helping the survivors, he focused on politicking disaster aid and prioritized how he could save face from the disaster survivors’ legitimate dissent.” This is how Marissa Cabaljao, secretary general of People Surge Alliance for Disaster Survivors in the Philippines (People Surge), had summarized government response.

The disaster survivors’ conference hosted by People Surge gathered this Tuesday, November 3, representatives of disaster survivors from different sectors in the region, including farmers, urban poor, workers and students. Speaking at the conference, Cabaljao noted that Aquino could have fast-tracked the rehabilitation process by disbursing the P923 million ($20 million) disaster funds, which reports said remain idle in banks.

“But Aquino seems to be reserving this money for only God knows what,” she said.

Most believed Aquino would be using the disaster rehabilitation funds to bankroll instead the campaign and planned election “victory” of Liberal Party candidates in the national elections next year.

“The disaster survivors’ testimonies are real. We speak from our concrete experiences on the grassroots and not from the ivory tower of Malacañang,” Cabaljao said.

After Yolanda struck, the region especially the most affected provinces were excluded in government labor surveys. This year, nearly two years since supertyphoon Yolanda (international name Haiyan) lashed this region of fisherfolk and coconut and food crop farmers, Leyte was still not covered in the April 2015 survey because of the large number of households which were displaced by typhoon Yolanda, according to the Philippine Statistics Authority.


In Leyte, after wrapping up their first regional conference of disaster survivors, Dr Elfleda Bautista, chairman of People Surge, told Bulatlat.com their people is even worse off today because succeeding typhoons (after Haiyan) “completed the devastation of the region.” Typhoons Glenda, Ruby and Seniang pummeled the provinces that had been least destroyed by Yolanda.

Bautista said Typhoon Ruby (Hagupit) affected Southern Leyte and Northern Leyte, two provinces that had been only 10-percent ravaged by Yolanda. “Although Ruby was not as strong (as Yolanda), it brought strong rains and lingered in the region for days,” said Bautista. Ruby (Hagupit) was the second most intense tropical cyclone in 2014. With a maximum strength of 175 kph windspeed, it first made landfall over Eastern Samar on December 6 last year.

Typhoon Seniang (Jangmi), brought flooding and landslide in Eastern Visayas since late December also last year. Most of the areas it inundated with heavy rains were those still reeling from the aftermath of Ruby (Hagupit).

It killed more than Ruby because of the landslide.

“If before Yolanda, Region 8 was second to the poorest, after Yolanda, we’re probably the poorest,” said Bautista.

Up to now, Seniang survivors rendered homeless are still in an evacuation center at the Catbalogan gym. A family of a teacher and former OFW lost their children to landslide during Seniang. They reportedly received P10,000 ($214) in burial assistance from the government. They have yet to rebuild their homes.

Amid the Aquino government’s lackluster response, the disaster survivors continued to source aid only from international and local non-government organizations, according to reports in the regional conference of survivors in Tacloban this Tuesday.

They said they also had to conduct collective protest actions just to get a portion of the reported aid supposedly coming their way.

In Palo, Leyte, 100 families had to press the government through mass actions so they would be included among target beneficiaries of government’s ESA (Emergency Shelter Assistance). Bautista said the government had excluded them because they were at a work –for-shelter arrangement with a non-government group.

“But where will we get food?” members of these families asked. They shared their experience in demanding to be included in the government’s list of beneficiaries and holding collective action. They did not receive aid in building shelter from the government, but some 50 of these families reportedly received P10,000 ($214) in aid. “Mainly to prevent them from holding rallies,” said Bautista.

Another report to the survivors’ conference was the “dagdag-bawas” (addition-subtraction) in aid and relief.

Bautista said some of the reported government aid and relief were indeed released, but survivors revealed that in some barangay (villages), some families were removed, without explanation, on the list of beneficiaries. Some remained but what they should have received as earlier announced was slashed or downgraded. For example, from receiving aid for totally damaged homes, they were given aid for partially damaged homes (or a reduction from P30,000 to P10,000, or $641 to $214).

Bautista said survivors also reported their names were stricken off the list of aid beneficiaries when it became known they were active at joining protests.

On November 6, survivors not just of Typhoon Yolanda but also of succeeding tropical storms are set to “occupy” a part of Tacloban City in protest of the Aquino government’s inadequate response. People Surge said it will spearhead a mobilization in protest of government inaction, and slow release of disaster funds.

A 21-km long tide embankment being constructed along Tacloban, Palo, and Tanauan areas in Leyte is affecting and dislocating many communities, according to the survivors’ conference.

Last week, Aquino and Roxas visited Eastern Samar to check on the billion-peso- US grant project of circumferential road network that they say will connect Eastern and Northern Samar.

But People Surge found these visits just proof of how Aquino “prioritizes more the interest of US imperialist over the plight of his own people.”

Cabaljao said in another statement the circumferential road network Aquino and Roxas visited is located on the site of a former US naval depot and air strip during World War II. Locals said foreign troops have been repeatedly seen at the area. In the light of the reported US pivot in Asia, there were talks that the US might be reopening its former bases in the Philippines.

Dr. Bautista reiterated that even as they are still reeling from the succession of storms, still unable to rise up fully and recover, there were complaints of militarization hampering the people’s recovery of their livelihoods.

“The people can’t attend to their farms because the military accost them and accuse them of being members or supporters of New People’s Army,” Bautista said.

Dr. Bautista urged those gathered in their disaster survivors’ conference to continue uniting and working for justice.

She told Bulatlat.com they are expecting 10,000 to 15,000 people to join the Nov 6 protest to mark the second anniversary of Yolanda in TAcloban City. She expressed hope that various groups will also attend.