Prices of goods and services have doubled or increased by 110 percent between 1997 and 2012. Meanwhile, the individual income tax brackets have remained unchanged.

MANILA – Lowering or even removing taxes on low and middle income families is now long overdue, it can be done, and the revenue that would be lost can be compensated if the government would collect taxes with more determination from the rich and from large corporations. This, in sum, is the statement issued by research group IBON today, and they provided supporting data.

The issue of lowering income taxes of low to middle income-earners is becoming an electoral issue as candidates, especially for national positions, are being pressed to reveal their stand on the matter. Progressive lawmakers led by Bayan Muna Partylist Rep. Neri Colmenares have proposed the lowering of income taxes to give relief to individual taxpayers who earn above-minimum but still short of the living wage.

His proposal was echoed in both the House of Representatives and the Senate. But President Aquino continues to defend the current income tax rates, citing “unintended consequences” like in the country’s credit ratings, and chronic budget deficit, if this proposed lowering of taxes were approved.

As various groups take to online petition signing to convince Aquino to lower taxes, even asking ‘Aldubnation’ to help, Colmenares posted in his social networking site that essentially, the Filipinos are overtaxed and underserved. “The Aquino admin. Is killing us with taxes,” he said in reply to a supporter. Another posted a petition for tax reforms at change.org … saying it is one way to prepare for a better future. 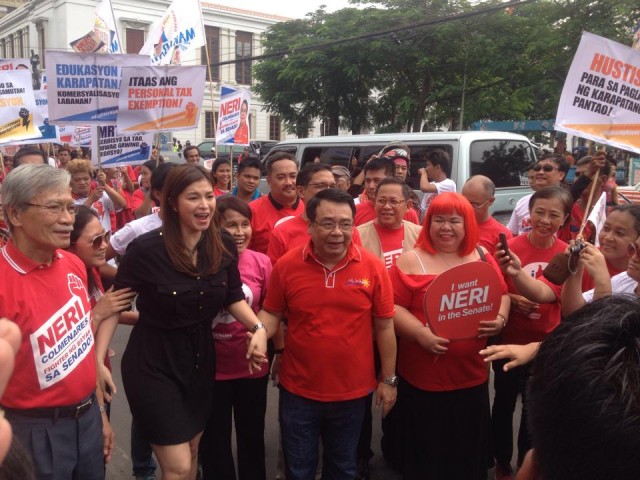 IBON said the proposal to lower income taxes is designed to mitigate the burden of rising prices and regressive tax system, which have unduly burdened the low and middle income families. The research group estimates that five million to six million Filipinos and their families are being doubly burdened by higher taxes and inflation.

Prices of goods and services have more than doubled or increased by 110 percent between 1997 and 2012, based on data of the Bangko Sentral ng Pilipinas (BSP). Meanwhile, the individual income tax brackets have remained unchanged since 1997. As the nominal income of the lowest-earning 70 percent of Filipinos had grown 137 percent between 1992 and 2012 (according to the latest Family Income and Expenditure Survey (FIES), it had overtaken the individual income tax brackets. The result is that many low and middle income families were vaulted into higher income tax brackets, even up to the highest bracket charging 32 percent, according to IBON.

Aquino asked to tax the rich not the poor

IBON ascribed the Aquino government’s refusal to lower income taxes to its deferring to elite economic interests. The research group estimates that there were up to Php780 billion ($17 million) in potential tax revenues from firms especially from large corporations in 2012 yet the Bureau of Internal Revenue (BIR) collected only Php371 billion ($8 million) that year.

IBON added that the country’s wealthiest families are paying only a few hundred million pesos in estate taxes every year, allowing them to accumulate trillions of pesos in wealth over the decades. Just the richest 50 Filipinos have already accumulated Php3.3 trillion ($70 billion plus) in wealth by 2014.

Lowering income taxes for the majority of families can be the start of more wide-ranging income tax reforms, stressed the group. Eventually, it said that personal income taxes on the richest will need to increase, and the system of corporate income taxes revised.

IBON recommended giving support to micro, small and medium enterprises through lower income taxes compared to large corporations. Data showed that in the Philippines, large corporations received many perks in doing business, including tax incentives, while the small to medium pay numerous taxes and fees just to register and operate.