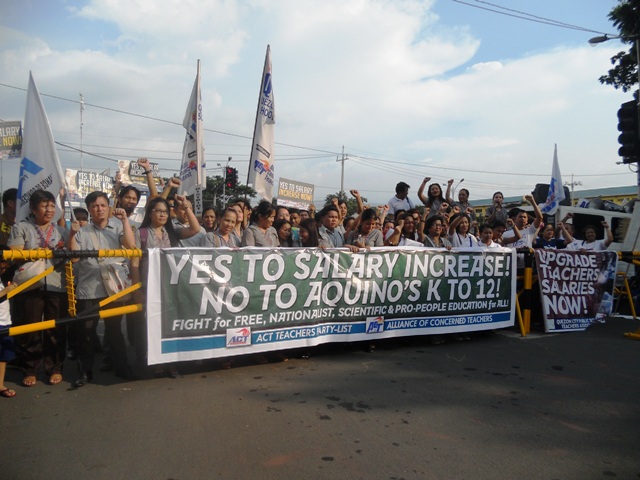 “The government should stop all these insults and indifference.”

The said increase will not cover the midyear 14th month bonus, enhanced performance-based budgeting (PBB) and any allowances.

“While this will slightly increase the final salaries received, the basic gross inequity in the salary increases remains,” Ibon Foundation said, adding that while it may provide some relief to underpaid government workers, “the increases for the high ranking government officials are excessive and undemocratic.”

The proposed pay increase of government workers was filed before the House of Representatives under House Bill No. 6268. The bill recently passed second reading. Meanwhile, the bill authored by progressive partylists House Bill 3015 that would aim to increase the salary of minimum-wage government employees has not prospered.

“The government should stop all these insults and indifference. They should grow a heart and bear some common sense that the minimum compensation for all workers and employees in all sectors should be fixed in a direction that can provide a decent living for their families,” the All Workers Unity said in a statement.

During the deliberation of the bill, Budget Sec. Florencio Abad compared the salary of the president to that of an operations manager of a consumer or manufacturing company.

But Ibon Foundation said that basing salaries on private sector pay “distorts the principle of public service and will only reinforce the already overly elite-oriented character of the government.”

The thinktank reminded the government that the “competitive salaries” of high executives in private corporations came from “underpaid and increasingly contractualized workers and from charging the highest prices possible for goods and services.”

Bayan Muna Rep. Neri Colmenares said wage increase should not be based on prevailing market wages but on the family living wage.

“The object of a wage increase is for employees to cope with the rising cost of commodities, healthcare, and education, and allow our workers to live decently and perform their roles in public service with dignity. The insistence of Sec. Abad and Malacañang that wages must follow ‘market’ wages is disfiguring the whole point of the SSL, because the private sector is wringing its workers dry in low wages,” Colmenares said.

Teachers under the Alliance of Concerned Teachers stormed the gates of the House of Representatives to register their dismay over the proposed Salary Standardization of 2015 last Nov. 12.

ACT secretary general France Castro said teachers were aghast to learn that they would get a meager P25 pesos a day salary adjustment under the proposed pay increase.

“This is not an increase but is rather a testament to the total disregard of Aquino to our poor plight. We are asking for a substantial increase and not for alms! With the sacrifices and service we are doing for the Filipino people, our demand is just and legitimate. Even a beggar will refuse such offer,” said Castro.

Abad should live on a minimum wage

“Since they are forcing our people to make do with this miniscule salary, perhaps it is high time that these unfeeling bureaucrats of the Aquino administration be given a dose of their own medicine,” Zarate said.

Colmenares found the increase as “unjust.” He added, “It will increase the ever-widening gap between the rich and poor. I hope our colleagues in Congress will find ways to correct this injustice.”