MANILA — President Benigno Aquino III, the son of so-called icons of democracy, criminalizes the exercise of civil and political rights.

Since Aquino assumed the presidency, 304 activists were arrested and detained, bringing the number of political prisoners to 561. 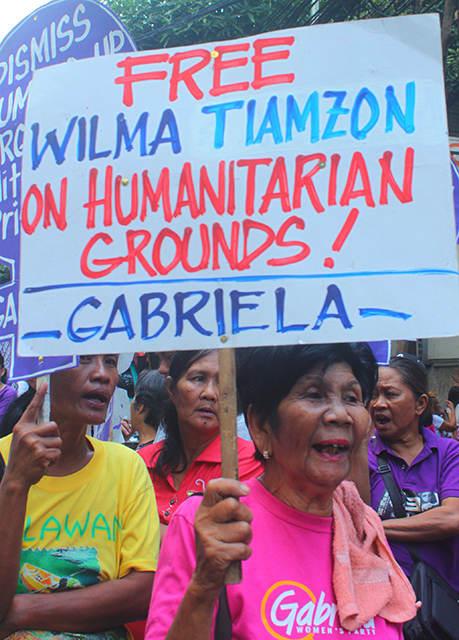 Union organizers were also targeted. Among them are Randy Vegas and Raul Camposano  of Courage, a federation of government unions. Both were based in Metro Manila but were implicated in alleged raids staged by the New People’s Army guerrillas in Camarines Norte. Arrested on Dec. 3, 2012, the two remain in jail in the said province.

Aquino refused to heed calls to release political prisoners on humanitarian grounds.Five political prisoners died in prison due to lack of medical care. They were Mariano Umbrero who died of cancer on June 15, 2011 inside the New Bilibid Prison; Crisanto Fat who died due to heart enlargement on Sept. 20, 2011; Alison Alcantara who died of pneumonia, sepsis and fatal arrhythmia on Sept. 18, 2013;Benny Barid  who died on Sept. 18, 2014 due to chronic asthmatic bronchitis with emphysema; and, Intong Amerol who died following a stroke on March 29, 2013.

Among them are Gerardo Dela Peña, 75 years old and suffering from hypertension and cataract.; Rolando Pañamogan who was admitted twice in 2009 at the NBP Infirmary and at the Philippine General Hospital and diagnosed with thyroid dysfunction and pneumonia related to tuberculosis. Shortly after recovering from the said illnesses, Pañamogan was diagnosed with Hepatitis B and diabetes.

Alegre couple, Jesus and Moreta, who are both in their late 60s and are languishing in jail for almost 10 years now. Both are suffering from hypertension and arthritis.

Ramon Argente underwent triple heart bypass operation in 2013. After the surgery, he was brought back to the PNP Custodial Center and continues to experience difficulty in breathing and chest pains.

Roy Erecre, a consultant of the National Democratic Front of the Philippines, is diagnosed with venous insufficiency, peripheral arterial disease and diabetes.

Sharon Cabusao, a writer and women’s rights advocate, is suffering from chronic B12 deficiency anemia. She is detained at the PNP Custodial Center in Camp Crame. 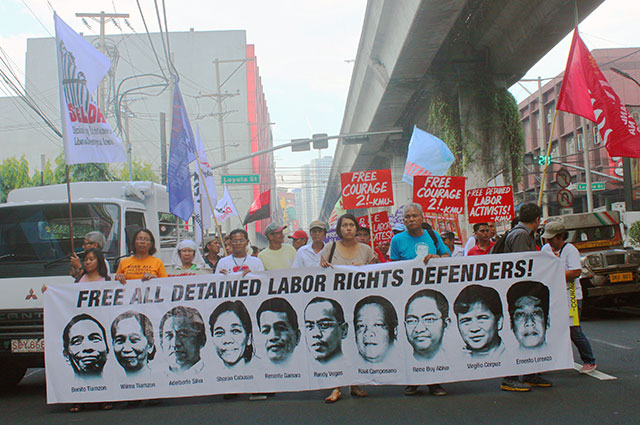 Fifty political detainees are women including Miradel Torres, who was arrested when she was four-months pregnant and forced to be separated from her son.

Nineteen peace consultants of the National Democratic Front of the Philippines (NDFP) are languishing in jails, a mockery of the Joint Agreement on Safety and Immunity Guarantees (Jasig) signed by the government and the NDFP in 1995. Jasig provides safety and immunity guarantees to all participants in the peace negotiations.

The NDFP has repeatedly called for the release of its detained consultants and staff but the Aquino administration would not budge, insisting on a technicality required for the identification of Jasig-protected individuals.

Lawyers of political prisoners pointed out the continuing use of what they call as “wholesale legal offensives.”

The Hilongos case is the classic example, which was among the charges filed against alleged communist top leaders Benito Tiamzon and Wilma Austria.

The Hilongos multiple murder charges is “a case of traveling skeletons,” according to Rachel Pastores of the Public Interest Law Center.

In July 2000, a complaint for multiple murder was filed against 25 alleged New People’ s Army (NPA) guerrillas in connection with the alleged mass grave found in Monterico village, Baybay Leyte. On January 10, 2005, the case was dismissed due to insufficient evidence. Six years later, multiple murder charges were filed in connection with another alleged mass grave in another town, in Inopacan.

Aside from the Tiamzon couple, three other NDFP consultants Vicente Ladlad, Rafael Baylosis and Randal Echanis, Makabayan party’s Satur Ocampo and more than 60 other alleged CPP leaders were implicated.

More recently, 15 Lumad supporters and activists have been charged with kidnapping, illegal detention and trafficking for extending assistance to internal refugees from Talaingod, Davao del Norte. One of those charged is Sis. Stella Matutina, spokesperson of Panalipdan-Southern Mindanao and this year’s recipient of the Weimar Award for Human Rights given by the Weimar City Council of Germany.

All over Mindanao, 508 activists and leaders who are facing 608 trumped-up charges, ranging from physical injuries to illegal possession of firearms and explosives, robbery, and murder.

Such trend shows that the Aquino administration is no different from the repressive record of his predecessor Gloria Macapagal-Arroyo.