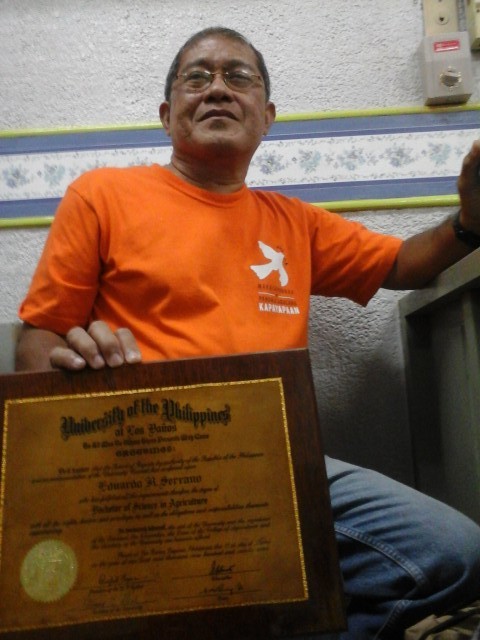 “It is with great grief and rage that we say farewell to such a man, who, at the last decade of his life, was refused his freedom. We hold the Aquino government responsible for this injustice done to Ka Eddik.”

MANILA – For activists and many progressive, it is not cardiac arrest that killed National Democratic Front of the Philippines (NDFP) peace consultant Eduardo Serrano, but the Aquino administration that refused to release him.

“It is not heart attack that killed Ka Eddik, but the ruling few, who, in their despair and insanity, denied him his freedom, believing that this would put an end to the struggle of the people,” Doris Cuario of Karapatan-Southern Tagalog said.

Serrano, or Eddik to his family and friends, was an agriculture graduate of the University of the Philippines-Los Baños. He received a post-graduate study on animal science in Copenhagen from 1978 to 1979. When he returned to the country, he helped found the Southern Tagalog-based peasant group Katipunan ng Samahang Magbubukid sa Timog Katagalugan (Kasama-TK), and offered consultancy on farming and irrigation for people’s organizations and private individuals.

In 2004, he was arrested and detained based on warrants for a certain Rogelio Villanueva, whom the military claims is a ranking official of the Communist Party of the Philippines. His lawyers from the Public Interest Law Center (PILC) said three of the five trumped-up charges filed against Serrano were dismissed for lack of evidence. The other is up for promulgation this year while the remaining case is on trial.

But the 62-year-old Serrano did not live to see all the charges cleared against him. Yesterday, Jan. 8, he passed away while in hospital arrest at the Philippine Heart Center in Quezon City.

“Despite the heavy brunt of state repression and wrongful imprisonment, he remained genuinely optimistic and committed to a just and lasting peace. PILC is proud to have stood for him in court, and by him in his life struggle,” PILC lawyers Rachel Pastores and Amylyn Sato said in a statement.

Serrano’s remains lie at the mortuary of the Parish of Holy Sacrifice in the University of the Philippines, Diliman in Quezon City today, Jan. 9, until tomorrow. He would be transferred to Los Baños on Jan. 12, where Southern Tagalog activists will hold tribute and memorial services. Serrano will be buried in his hometown in the Bicol region.

In a text message, Dr. Geneve Rivera-Reyes said Serrano underwent angioplasty and pericardiostomy on Dec. 19, 2015, about three days after he was rushed to the hospital for suffering a heart attack. He was first brought to the Taguig General Hospital, where he stayed for several hours before he was moved to the Philippine Heart Center.

“But his heart was so damaged that it was able to function only a quarter of its capacity,” she said.

On the eve of his death, Serrano hardly slept. The following morning, he complained of difficulty in breathing before he suffered another cardiac arrest that led to his death.

Serrano, who was hypertensive and diabetic, was among the sickly and elderly political prisoners whom human rights activists have long called to be released. Their calls fell on deaf ears, when, even when Pope Francis called for mercy and compassion during his visit early in 2015, President Aquino did not release a single prisoner. Since the start of its term, the Aquino administration had denied that there are political prisoners in the country.

Cuario blamed Serrano’s deteriorating health to the poor conditions inside the jail, where he had spent the last decade of his life.

“It is with great grief and rage that we say farewell to such a man, who, at the last decade of his life, was refused his freedom. We hold the Aquino government responsible for this injustice done to Ka Eddik,” a joint statement of Bayan Muna Reps. Neri Colmenares and Carlos Zarate read.

Serrano’s former lawyer Edre Olalia, who is also National Union of Peoples’ Lawyers secretary general, described the late peasant leader as a “selfless, simple and humble human being who simply wanted to fight injustice, oppression and penury till his last breath.”

“He would have been freed a long time ago were it not for the cruelty and insensitivity of the dominant political and justice system that treated him as dispensable and nonexistent for the longest of time. Ultimately and in a fundamental sense, the Philippine government is responsible,” Olalia said.

He added that the Philippine government has failed not just Serrano but also others whose lives have been treated cheaply, such as the baby of former political prisoner Andrea Rosal and hundreds more who are sick, elderly or both.

Olalia said, “Will BS Aquino make time to visit the wake of someone he personally does not know but should know? We will be the ones to visit Pnoy with cases even before he jumps into his vacation. There will be no rest for the truly wicked.”