Janess Ann J. Ellao February 26, 2016 #StopLumadKillings, internal refugees, UCCP
“They will ‘turn aside justice’ and ‘deprive the people of their rights’ just as long as their wanton greed is fed, though not even sated.”

MANILA – All seven-strong area bishops of the United Church of Christ of the Philippines gathered today, Feb. 26, to hold President Aquino accountable for the burning down of their mission center in Haran, Davao City, where some 700 Lumad are seeking refuge from militarization in their communities.

UCCP general secretary Bishop Reuel Marigza said all they have heard from the Aquino administration following the burning down of their mission center is a “deafening silence.”

On the eve of the 30th year commemoration of the first EDSA uprising, suspected members of Alamara, a paramilitary group formed and armed by the Armed Forces of the Philippines, set fire a dormitory inside the UCCP’s mission center. The incident left five Lumad injured, including children.

For more than a year, the UCCP’s mission center in Haran has served as sanctuary for some 700 Lumad, who left their community due to heavy militarization.

In its pastoral letter, the UCCP said they have received threats that the mission center would be torched in December 2015.

“When these attempts made in the light of day did not prosper, those behind these evil acts now attack under the cover of darkness. But God will not allow that the greedy and the wicked will have their way in the world,” the bishops said.

In their pastoral letter, UCCP bishops said the militarization was meant to drive away the Lumad from their land and give way to big corporations.

This is not the first time for UCCP to be subjected to attacks because they provided sanctuary to the Lumad. In July 2015, police led by Rep. Nancy Catamco attempted to break down their mission center purportedly to “rescue” the Lumad seeking refuge there.

In tears, Eufemia Culamat of the indigenous peoples’ group Mapasu said that when they heard of the two incidents of arson at the Haran compound, they were worried as they, themselves, are evacuees in Tandag City.

“It hurts us that even when we are already in evacuation areas, there are still attacks against us,” Culamat said.

She shared during the press conference that last Feb. 22, a peasant office in Tandag City was also nearly burned down. About seven unidentified men entered the office compound at around 8:00 p.m. and poured gasoline on the building.

It was a good thing, she added, that there were many people in the office and were able to put down the fire.

Katribu secretary general Piya Malayao also disputed the claims of the military that the fire was done on purpose to gather support from “alleged” donors of the Lumad.

“We all know that no one would believe them. But just the same, this statement is dangerous. It really goes to show how they would never hold themselves to account for this crime,” she said. 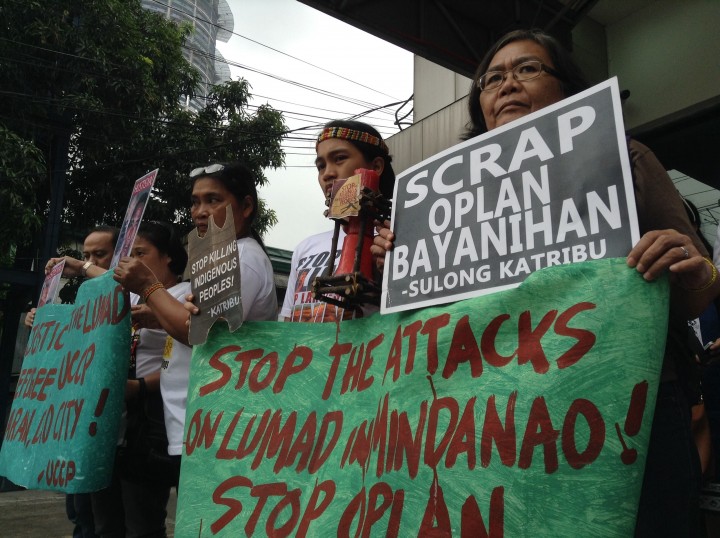 National Council of Churches in the Philippines general secretary Fr. Rex Reyes Jr., for his part, said that such “irresponsible” statement from the military proves who the real perpetrators are. He added that the Lumad have never deliberately demanded cash, especially from supporters overseas.

In January of this year, alone, Malayao said there were three Lumad killed in the Davao region.

Marigza said that the church is being red tagged for providing sanctuary to the Lumad. But he insisted that they do not mind being called communists as long as they provide help to the Lumad.

The bishops called on their constituents and partners to join them in prayer and vigilance. Meanwhile, they are currently tightening security measures within and outside the Haran compound.

Reyes said, “They may have burned down our buildings. But they fueled our commitment to serve the indigenous peoples.”