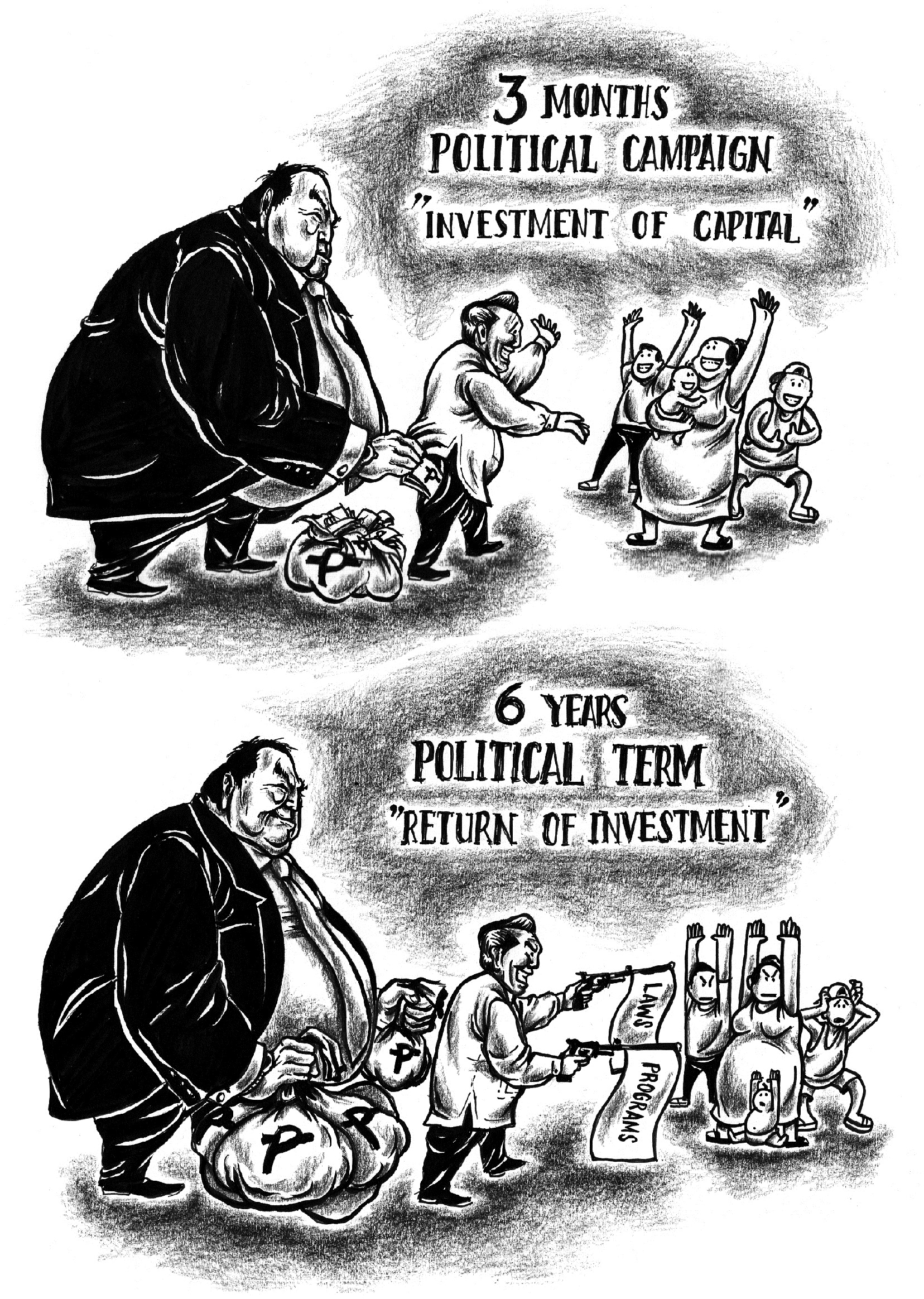 To get a good picture of the amount it takes to become president, let us look at the financial reports submitted to the Commission on Elections (Comelec) by the candidates for president and vice president during the 2010 elections.

Thus, candidates for president and vice president in the 2010 elections, if their reports are to be believed, spent hundreds of millions to launch a credible, competitive campaign. But the Comelec has no way of checking this. And everybody believes that candidates spend way more than what they report.

A July 2015 article written by Wilson Lee Flores with the title True Cost of a Political Campaign published online by Rogue magazine, quoted a source, an anonymous businessman, who said: “A candidate needs at least P2.5 billion to P3 billion ($53 million to $63.8 million) to run for either president or vice-president. For a senator, a candidate needs at least P400 million ($8.5 million) upwards.”

Campaign expenses cover the cost of sorties, staff, special projects (including cash handouts), and media ads. A source from a big media conglomerate told this writer that the cost of a primetime 30-second TV ad was P600, 000 ($12,700) in 2010 but currently costs P800, 000 ($17 thousand). If a candidate runs a TV ad everyday in just one station for the three-month campaign period in 2010, it would amount to P54 million ($1.15 million), which today would cost P72 million ($1.5 million). It would double the amount if the candidate runs the ad in the two major media conglomerates. But candidates do run TV ads, disguised as info plugs, much earlier than the official campaign period, and they place ads in at least two of the big media conglomerates. For example, in a report by the Philippine Center for Investigative Journalism (PCIJ), writer-researcher Che de los Reyes wrote that from Nov. 11, 2012 to Feb. 11, 2013, then senatorial candidate Nancy Binay placed a total of 130 minutes for 260 spots amounting to P52.67 million ($1.12 million).

The next question is: Where do they get the funds? This is even more difficult to accurately identify and verify than the report on campaign expenses. It has generally been believed that the reports on campaign donations submitted by the candidates have been grossly understated.

These contributors donated millions of pesos for the campaign kitty of candidates, with some donating as high as P100 million ($2.1 million).

The question is for what? For love of country? For believing in a candidate? What do they expect in return if and when the candidate they supported wins? There may be no formal agreement between the donor and the candidate but would the latter not give in to a request or would not favor the former in decisions and contracts when he or she is already in position?

Mar Roxas, as Manny Villar before him did, claims that he is spending his own money. Well and good that he is not beholden to anyone, except his family. But would Roxas and his family not try to recoup their expenses if he wins?

Businessmen, and also politicians, are not in the habit of giving out money. They are allergic to expenses and would only release money freely if they consider it as an investment. And in investments, they do not only intend to recoup the money they released, they intend to multiply it several fold.

The sheer amount of money involved in electoral campaigns makes it essentially undemocratic. For one, only those with the money and with the proper connections could run for office. Second, the success or failure of any candidate is determined greatly by the amount of resources, most especially money, he or she could generate to run the electoral campaign. And government officials decide not on the basis of goodwill but of interests, mainly economic, of their family, friends, supporters, and of course, contributors.

It costs a lot to run for a high government office. However, in the final analysis, it is the people who bear the actual costs, and more, because we are the ones who would be gravely affected by policies, laws and programs that enrich a few, but increase the burden of the majority.