The management wants to implement a two-tier wage increase, with only 50 percent being guaranteed and the other half dependent on the company’s and employee’s performance.

MANILA – Outside the newly built TV5 Media Center in Reliance, Mandaluyong, scores of employees and supporters held a picket, March 4.

Members of the ABC Employees’ Union (ABCEU) are calling on the management to “negotiate” and not dictate the terms for the new Collective Bargaining Agreement (CBA).

The CBA negotiations, which began in September last year, reached a deadlock as TV5 management insists on what the union described as “measly” wage increases, “divisive” two-tier wage scheme, “harsh penalties” in the Code of Conduct, among others.

Vladimir Martin, ABCEU president, said the management is pushing for a wage moratorium this year despite the expected huge earnings from the elections.

“Binabarat kami kahit malaki kikitain ngayong eleksyon,” (We are being offered alms even if the network will earn so much from the elections) Martin told Bulatlat in an interview. He said that a 30-second advertisement on prime time costs P444,000 ($9,500).

The management wants to implement a two-tier wage increase, with only 50 percent being guaranteed and the other half “dependent on the company’s and employee’s performance.”

The scheme, according to Martin, “aims to pit workers against one another.” The union bats for an equitable salary increase for all. 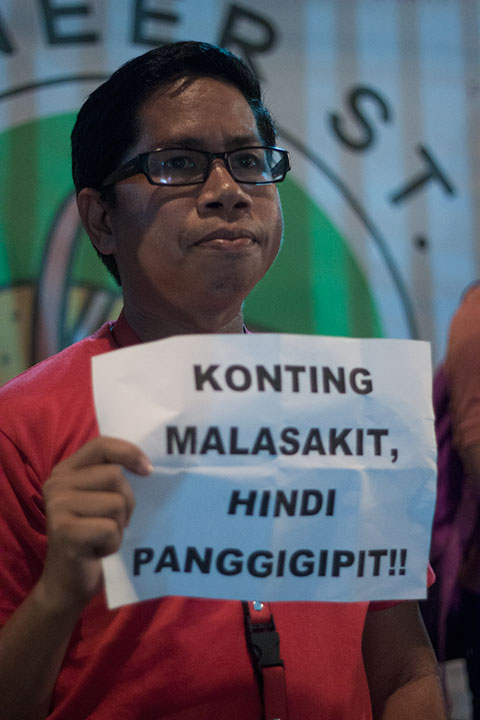 Martin pointed out that the management’s current proposal is much lower than the CBA in 2010. In the approved CBA in 2010, workers got P9,500-increase ($203) given in tranches over five years.

Martin said they don’t see any reason why the management would not be able to grant them “just” salary increases now that company is doing better compared to 2010.

The ABCEU is also questioning the Code of Conduct, which has been implemented by the management since 2013 without the approval of the union. Some of the provisions, Martin said, were harsh. For example, a first offense for tardiness would mean one-week suspension. A second offense would amount to dismissal.

The union also decried the delayed remittance of union dues; delays of up to four years in promotions; delayed reimbursements of per diems and other allowances, with some employees owed up to P100,000 ($2,140).

On the political aspect, Martin said the union is calling on the management to regularize contractual employees.

Martin said hundreds of TV5 employees are on open contract, without benefits despite their job being “desirable and necessary” in the business.

Members of the National Union of Journalists of the Philippines (NUJP), College Editors Guild of the Philippines, Talents Association of GMA (TAG), All Workers Unity joined the solidarity activity for TV5 employees.

“It is a sad and alarming trend among the country’s media giants that the profit motive has taken all precedence over public service and their obligations to the very people whose hard work ensures that they can continue both informing and educating our people and, at the same time, earning,” the NUJP said in a stamen.

The NUJP urged “colleagues in the media industry to stand by the ABCEU as they push their fight for better working conditions and wages, for their victory will eventually be our victory as well and, just as important, redound to the benefit of the people whose rights to information and education we serve.”