Back story | An ‘ordinary man’ who lived an extraordinary life

Bulatlat is reposting stories about the late Communist Party of the Philippines spokesperson Gregorio “Ka Roger” Rosal as supporters give him their highest tribute in time for the New People’s Army’s 47th anniversary today. 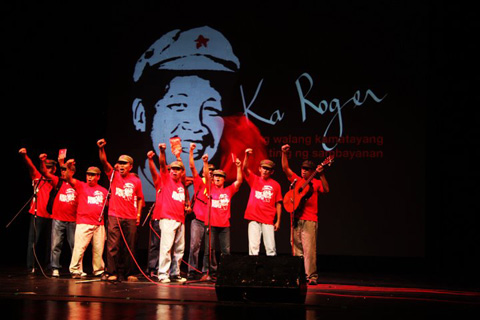 As a boy, he was ordinary. However, he died an extraordinary man mainly because he chose a life that touched so many ordinary people who came to love him in return. (Read more)

Ka Roger given tribute in NPA base areas, urban streets and schools

He may have been gone already, but he is apparently so well-loved and well-remembered that on the day designated by the communist movement as his Day of Tribute all over the Philippines, Gregorio “Ka Roger” Rosal garnered an outpouring of love and admiration fit for a statesman. The coolest spokesman of Filipino revolutionary guerillas, the former spokesman of the Community Party of the Philippines would sorely be missed, some AM radio texters lamented. (Read more)

His family’s poverty is said to have exposed the young Rosal to the social inequities, which he vowed to fight against by joining the Kabataang Gabay ng Bayan (KGB), a local nationalist youth organization. (Read more)