“It’s not too late to win the P2,000 increase in pension for our senior citizens.”

MANILA — Members of Bayan Muna Partylist renewed its push for a congressional override of the veto by President Aquino of the proposed pension hike.

In a picket in front of the Social Security System (SSS) in Quezon City on April 19, Tuesday, Bayan Muna Partylist representative Carlos Isagani Zarate rallied their supporters saying “It’s not too late to win the P2,000 ($43) increase in pension for our senior citizens.”

The group plans to still push for the veto override on May 23.

Bayan Muna has been gathering signatures to override President Aquino’s “heartless veto” on the SSS pension hike. They need 192 to trump the veto. So far, they have reportedly clinched at least 89 supporters from members of the House of Representatives.

Since the president’s veto of the pension hike, many people and not just senior citizens, have taken noticed of the country’s social security system, how it is being run, not just the Social Security System [SSS] but also the Government Service Insurance System [GSIS]. For the first time, protest gatherings spearheaded by senior citizens and supported even by non-seniors were held, and even seniors who are not SSS pensioners have urged fellow seniors to lend support to the call.

“I will still move for the override resolution on President Aquino’s veto of the P2,000 ($43) pension hike when Congress resumes session. We hope that our fellow lawmakers will not fail us and our seniors and support the override,” Rep. Colmenares said.

Rep. Colmenares asked the country’s senior citizens to go to their respective representatives and request them to support and vote in favor of the override on May 23, when Congress reconvenes. 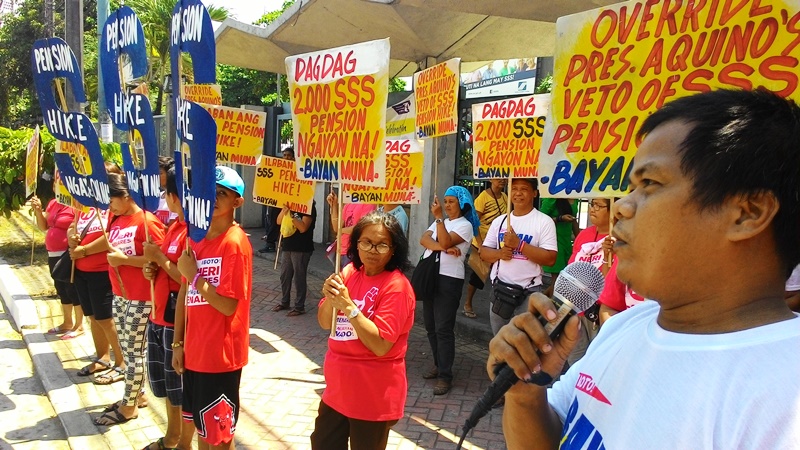 Even at the so-called 11th hour of Congress, when many of its members are already in the thick of the election campaign season, the two Bayan Muna solons are hopeful that the veto would still be taken up. They reiterated that the pension hike is feasible and just.

“SSS has the gumption to give millions in bonuses, perks, and salaries for its top ranks. This alone belies their claim of bankruptcy if the pension increase happens,” Rep. Colmenares said.

On the other hand, Rep. Zarate said SSS collection rate remains at a dismal 38 percent.

“We urge SSS to go after big-time companies and demand SSS payments as required by law. Slashing off extravagant bonuses and improving collection efficiency will also make SSS fund more stable and far from the doomsday scenario that SSS wants us to believe,” Rep. Zarate said.

The Bayan Muna solon said actuarial studies showed that the SSS has a more than enough fund life to support the hike. But more than that, he said, it is a matter of social justice, given that the current amounts of pension can barely fund the subsistence needs of the pensioners.

“Let us give our seniors the dignity they deserve in their twilight years,” Rep. Zarate said.