MANILA – More than 120 and counting. That is the number of confirmed members of House of Representatives who have signed a bill to override the presidential veto of the P2,000 ($43) pension hike.

According to House rules, that much support should have prompted the House leadership to put the proposal to a vote, Rep. Lito Atienza said in a radio interview Tuesday morning. Atienza was one of four congressmen who had to raise their voices, to no avail, last Monday Jun 6, just to urge the House to put the SSS pension hike veto override to a vote.

But the House leadership comprised of House Speaker Feliciano Belmonte, Mandaluyong Rep. Neptali “Boyet” Gonzales and Isabela Rep. Giorgidi Aggabao refused to tackle the issue to the point that Atienza said they were rudely treated during the Congress’ deliberation.

He described the way Gonzales and Aggabao swept the veto override away as “tyrannical.”
Bayan Muna Rep. Neri Colmenares today said they could have made history last night through a legislative action that will long be remembered by the Filipino people.

“We could have made a legislative intervention that will set a precedent against an unjust presidential veto, but we abdicated from that role castrating congressional power fearing the wrath of an outgoing president,” Colmenares said. He added that it is not the job of Congress to spare the president from embarrassment.

The SSS pension hike was proposed by Colmenares. Filed during the 16th Congress since 2011, it was deliberated for nearly five years, the amount of the hike was slashed from P5,000 ($109) to P2,000 ($43), before the proposal was approved and submitted for signature into law by President Aquino. But Aquino vetoed it in January 2015, prompting wide protests and in Congress, a signature drive led by the Makabayan bloc of legislators to override the presidential veto.

It can be recalled that the last time the veto override was up for voting, the deliberations in the House of Representatives was unceremoniously terminated. Bayan Muna Reps. Neri Colmenares and Isagani Zarate said the president’s allies in the House leadership “panicked.”

This time around, as 16th Congress adjourns, the House leadership just did not observe its own rule, according to Atienza. He was referring to Bayan Muna Rep. Colmenares’ motion for House members to vote by tellers or nominal voting. Based on House rules, they need a fifth of plenary or about 50 votes to have nominal voting. The representatives seeking to trump Aquino’s veto of SSS pension hike already have more than 50 votes.

Colmenares, meanwhile, chided his fellow representatives saying there is no rule that prohibits the House from tackling business just because the Senate has adjourned. He said the Senate can always reconvene any time, as it has done so in the past, before their term ends on June 30.

“The House leadership just does not want to put it to a vote for fear that our motion will get the necessary votes to override the veto of the president,” Colmenares added.

In another statement, Kilusang Mayo Uno vice-chairperson Roger Soluta said “Belmonte and the House leadership acted like Aquino’s stooge until the very end.”

The labor center, which has been one of the supporters of the proposed pension hike, condemned the House leadership for having remained “true to Aquino’s thrust of refusing or thwarting any form of immediate relief for ordinary Filipinos.”

“They refused to heed workers’ and Filipinos’ clamor for change until the very end. Their rejection of the override, while predictable, is still revolting for SSS pensioners, workers, and all Filipinos,” said Soluta.
Hopes for the pensioners now reside with the incoming President Rodrigo Duterte, who has repeatedly expressed support to increasing the retirees’ pension. 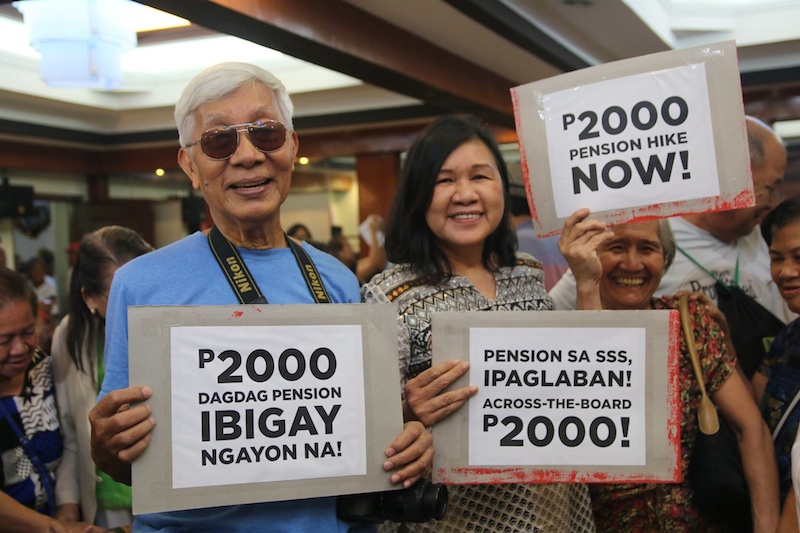 As the battle for SSS pension hike has made it a national agenda and gained the support of many, Colmenares said all is not lost. “The chances of increase has become a possibility because of that battle by our senior citizens, which would not have been there had the bill not been filed,” said Colmenares.

Duterte is now being urged to take the fastest route to granting the pension hike. One way this could happen is if he immediately issues an executive order and makes sure that it is budgeted. Supportive lawmakers pointed to the proposals listed by Colmenares in making sure SSS funds remain and even grow for its members and pensioners.

Bayan Muna also plans to refile the bill next Congress with the hope that it will pass into law in a short time.

[All Photos by Kodao Productions]