Many steps have yet to be undertaken for the spirit and intent of the Comprehensive Agreement on Respect for Human Rights and International Humanitarian Law (CARHRIHL) — to make the armed conflict more humane and to protect civilians — be realized.

MANILA — On the seventh of this month two years ago, Jang Monte Hernandez received the news she had long dreaded.

Her sister Recca Noelle Monte, a 33-year-old New People’s Army (NPA) guerrilla
, was killed in a military operation in Lacub, Abra. Jang said the family knew death would come one day but seeing the remains of Recca shocked them. Not a single bullet pierced her body but Recca’s face was mutilated. Her skull was like a “crushed egg.” Her legs, too, were crushed.

The Lacub incident is just one of the thousands of reported cases of violations of the Comprehensive Agreement on Respect for Human Rights and International Humanitarian Law (CARHRIHL).

The CARHRIHL is the first substantive agreement signed by the Government of the Republic of the Philippines (GRP) and the National Democratic Front of the Philippines on March 16, 1998. It binds both parties to international humanitarian law, which provides protection to civilians during armed conflict and to combatants who could no longer fight, also known as hors de combat.

The CARHRIHL provides for the formation of the Joint Monitoring Committee (JMC) tasked to monitor the implementation of the agreement.

The JMC has two co-chairpersons from each side who act as chief representatives and three members from each party and two observers from human rights organizations.

On June 4, 2004, the JMC Secretariat Office was opened in Cubao, Quezon City.

Jang and relatives of other NPA fighters slain in Lacub went to the JMC-GRP Secretariat to file complaints against troops of the Army’s 41st Infantry Battalion (IB). Under the CARHRIHL, desecration of the remains of those who have died in the course of the armed conflict is prohibited.

Despite their anger over the recognition given to 41st IB troops a week after the incident, Jang said they had hoped the JMC could be a venue to attain justice for Recca.

Two years after they filed the complaints, Jang said they have heard nothing from the GRP-Monitoring Committee.

Apparently, the two parties do not see eye to eye on how the JMC should work during times of impasse.

Under the Aquino administration, formal peace talks fizzled out after the first round in February 2011. Until the end of Aquino’s term, efforts to resume formal talks did not prosper.

Even during impasse, Fidel Agcaoili, chairperson of the NDFP Human Rights Committee, maintained that the JMC should continue to hold regular meetings as stated in the CARHRIHL.

The GRP panel, on the other hand, told Bulatlat in an email interview that the JMC cannot hold meetings when there are no formal talks.

The GRP panel said that the joint operations of the JMC depend upon the status of the peace process between the GRP and the NDFP. It cited Part VI, Art 3 of the CARHRIHL, which states “CARHRIHL shall be subject to the Comprehensive Agreements on Political and Constitutional Reforms and on End of Hostilities and Disposition of Forces.”

Even then, the GRP panel recognizes that each component of the JMC operates independently of the other. The CARHRIHL states that “the Parties shall continue to assume separate duties and responsibilities for upholding, protecting and promoting human rights and the principles of international humanitarian law in accordance with their respective political principles, organizations and circumstances until they shall have reached final resolution of the armed conflict.”

The respective Secretariats of both parties have been receiving complaints on CARHRIHL violations. (See related story: State security forces account for 71% of rights, humanitarian law violations) 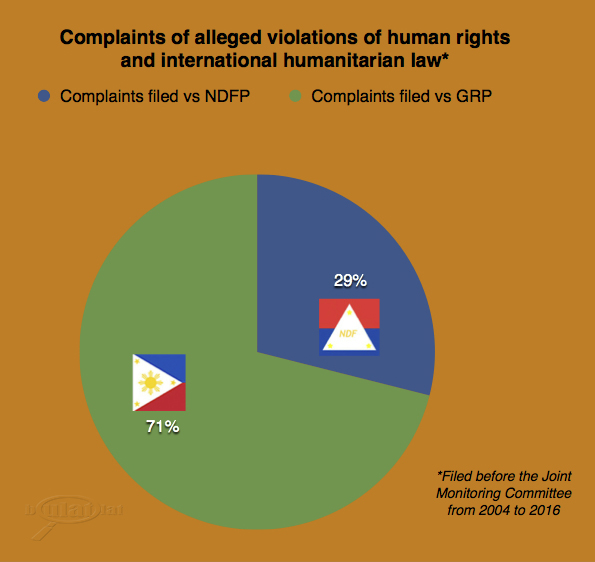 The GRP panel said that as of August 31 this year, a total of 1,927 complaint forms had been submitted against the NDFP.

Efforts from both parties

The GRP panel told Bulatlat that the GRP-Monitoring Committee tried to spread awareness and understanding of the CARHRIHL among stakeholders. The GRP-MC offered orientation seminars, including workshops, on the HR-IHL related laws to various members of the Armed Forces of the Philippines (AFP) and Philippine National Police (PNP) across the country.

Asked how the government implements the CARHRIHL, the GRP panel said punitive laws such as the Anti-Enforced Disappearance (RA 10353), Anti-Torture (RA 9745) and IHL Law (RA 9851) had been enacted to hold perpetrators accountable for any committed HR-IHL violations.

Since the enactment of these laws however, no one has been convicted yet of the crimes of enforced disappearance, torture and violations of IHL.

The government peace panel also cited the creation of the Inter-Agency Committee under Administrative Order No. 35 to fast track the resolution of cases of extra-legal killings, enforced disappearances, torture and other grave human rights violations.

At the end of the Aquino administration, the so-called super body created by AO 35 has not resulted in the conviction of perpetrators of extrajudicial killings.

On the NDFP’s part, Agcaoili said the CARHRIHL has been incorporated in the basic study course of the NPA and is imbibed by the NDFP’s local organs of political power.

Agcaoili pointed out that even before the signing of the CARHRIHL, the revolutionary movement has been abiding by its own principles, policies, rules and guidelines in the conduct of the armed conflict in relating with civilians, communities and members of the reactionary armed forces. He said the NPA has always treated its prisoners of war humanely and with utmost respect for their rights.  He added the NPA guerrillas treat enemies wounded in the battlefield and have avoided armed encounters in communities, desisted from setting up camps among civilian houses, among others.

With the resumption of formal talks between the GRP and the NDFP, Jang said their hopes are somehow rekindled.

During the formal peace talks held in Oslo last August, both JMC chairpersons agreed to meet on September 20 to 21 to discuss, among others, the formal revitalization of the JMC.

Incidentally, Recca’s husband, Kennedy Bangibang, was among the NDFP consultants released from detention to participate in the peace talks.

In the closing ceremonies of the first round of talks, Bangibang handed out copies of Recca: From Diliman to the Cordilleras and More Than a Red Warrior, Arnold Borja Jaramillo: Beloved Son of Abra to the members of the GRP peace panel. The two books depict the lives of the two NPA fighters, not only as guerrillas fierce in the battlefield but as a mother, father, sister, brother and friend.

Many steps have yet to be undertaken for the spirit and intent of the CARHRIHL — to make the armed conflict more humane and to protect civilians — be realized.