Instead of burdening the people with increased taxes, the Makabayan lawmakers urged the Finance Department to work on its tax collection efficiency and go after the big tax evaders.

MANILA – Progressive partylist lawmakers in the Makabayan bloc voiced this week their opposition to the tax proposals of the Department of Finance. The proposals are in a bill currently seeking sponsors in Congress.

The Makabayan lawmakers say the bill contradicts President Duterte’s directive to the Finance department. The president has ordered to lift anti-poor taxes and not to add to them.

The progressive lawmakers described the Finance Department’s proposed tax measures as blatantly anti-poor. Anakpawis Rep. Ariel Casilao said it will not only result in unpopularity of the Duterte administration but also impact on the very lives of the people.

The tax proposals are riding on the populist demand to bring down the income tax especially of the lower earners, but, according to ACT Teachers Party Rep. Antonio Tinio, it is also being used by the Finance Department to impose additional tax burden on the people.

In the Finance Department’s proposed tax measures, those earning P250,000 a year would be exempted from paying income tax. But, in exchange, the Department of Finance (DoF) is proposing to mitigate the resulting revenue loss with tax hikes or new taxes that would impact more on lower-income earners.

These include imposition of excise tax on petroleum products such as diesel and gasoline. Bayan Muna Rep. Carlos Zarate warned that this will have an adverse “cascade effect” on the people, because prices of diesel and gasoline will rise (by at least P6 or $0.12 per liter), resulting in increases in prices of other products and services.

“I have a feeling that even without the data to compute now, we can see the potential tax take in the DoF proposal would exceed the revenue loss due to the reduction of income taxes,” Bayan Muna Rep. Zarate said.

The Finance Department is also seeking to lift the current exemption of senior citizens and persons with disabilities from paying the Value Added Tax, a proposal which ACT Teachers Party Rep. France Castro also described as anti-people.

Even the Finance Department’s choice of giving tax exemption only to those earning P250,000 ($5,167) a year is “arbitrary,” according to ACT Rep. Tinio and Bayan Muna Partylist Rep. Zarate. The latter questioned how the Finance Department came up with that amount, when a family’s cost of living is now more than P300,000 ($6,200) a year.

Worse, it appears that the Finance Department is actually seeking to impose higher tax rates.

ACT Rep. Tinio noted that the rates 5% to 15% have disappeared. He asked, who will be hit hard? “It would still be the lower and middle-income level earners,” he said. He thus concluded that the income tax will continue to be a heavy burden on ordinary employees and professionals, including the journalists attending their press conference in Congress last Thursday (Sept 29).

Instead of burdening the people with increased taxes, the Makabayan lawmakers urged the Finance Department to work on its tax collection efficiency and go after the big tax evaders.

“Currently, tax evaders are getting away from paying – they are escaping the enforcement of tax laws,” said Anakpawis Rep. Casilao.

The Makabayan lawmakers urged the Department of Finance to impose more taxes on those benefiting more from the economy. He is referring to corporations reaping higher income, but whose corporate income taxes are also proposed to be reduced. 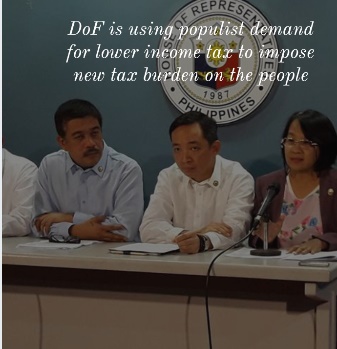 Doing that is like taking away by one hand what the other hand has given away, Bayan Muna Rep. Zarate said.

Citing how much the people stand to lose from the said tax proposals, the Makabayan lawmakers vowed that they will oppose it starting from the committee level in Congress.

The progressive lawmakers urged the Department of Finance to steer away from the dictates of the IMF-WB, two financial institutions which they blame as the source of the proposed measures. They said the tax proposals being like that as it is now come as no surprise given that the DoF Undersecretary Karl Kendrick Chua is a former senior country representative of World Bank.

“It’s high time we stop obeying the dictates of international finance institutions such as IMF-WB, for the welfare of our people,” said Bayan Muna Rep. Zarate.