You Are Here: Home → 2016 → October → 6 → Groups reiterate call for release of all political prisoners

Groups reiterate call for release of all political prisoners 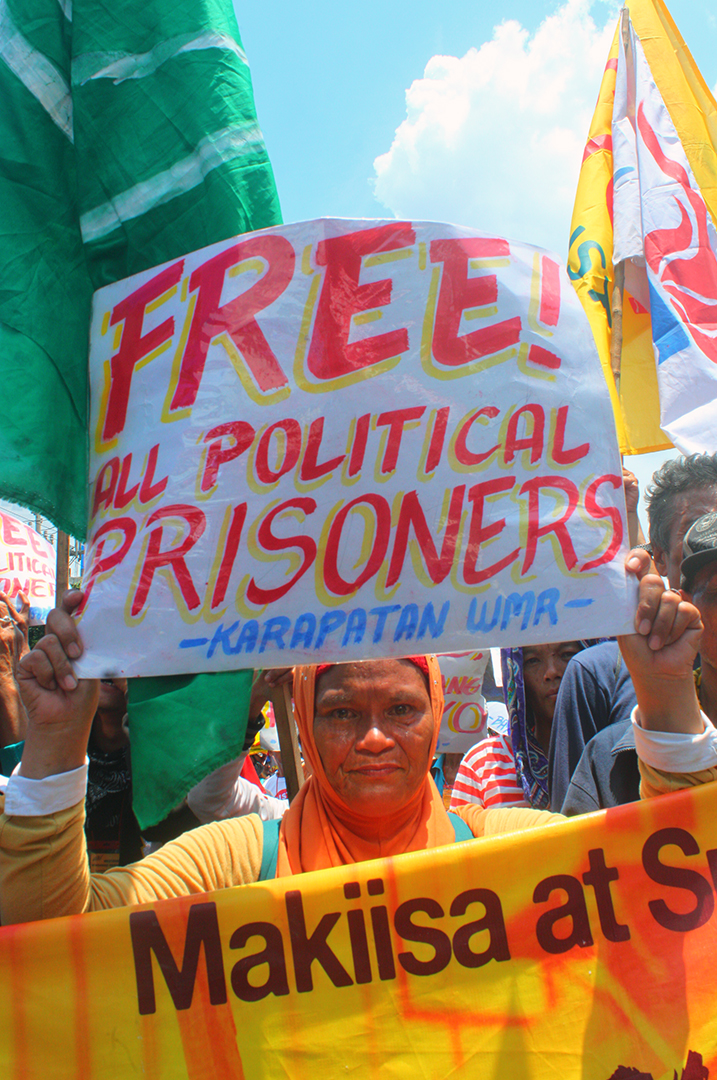 “The amnesty and release of all political prisoners is an act of righting the violations of the CARHRIHL and the Hernandez political offense doctrine.” – NDFP chief political consultant Jose Maria Sison

MANILA – Just before the second round of formal peace talks between the government and the National Democratic Front of the Philippines (NDFP), human rights groups reiterated the call for the release of all political prisoners.

The Samahan ng mga Ex-Detainees Laban sa Detensyon at Aresto (Selda) maintained that the ailing and elderly, women, and those who have been detained for more than a decade should be freed immediately on humanitarian grounds.

According to human rights alliance Karapatan, there are 504 political prisoners in the country.

“Their continuing incarceration is grave injustice not only to the political prisoners but to their families as well,” Fr. Dionito Cabillas, SELDA spokesperson said. “They have suffered long enough because of fabricated cases filed against them. It is about time that they walk free.”

Cabillas pointed out the continued detention of political prisoners violates the Comprehensive Agreement on Respect for Human Rights and International Humanitarian Law (CARHRIHL). The CARHRIHL is the first substantive agreement signed by the Government of the Republic of the Philippines (GRP) and the NDFP. It mandates both parties to respect human rights, including civil and political rights.

In a statement, the NDFP decried what it called the “continuing non-compliance” of the GRP with CARHRIHL and the Joint Agreement on Safety and Immunity Guarantees (JASIG).

“The amnesty and release of all political prisoners is an act of righting the violations of the CARHRIHL and the Hernandez political offense doctrine,” said NDFP chief political consultant Jose Ma. Sison.

The Hernandez political doctrine is a 1956 Supreme Court jurisprudence prohibiting the criminalization of political dissent. The decision held that the crime of rebellion is charged as a single offense, and that it cannot be complexed with common crimes.

The NDFP maintained that the release of all political prisoners should not be an outcome of a final peace agreement.

Recent reports quoted GRP Peace Panel Chairperson Silvestre Bello III saying that “a draft amnesty proclamation that enables the release of the political detainees is ready for submission during the second round of peace talks” but, qualified that “a general amnesty could be declared by President Duterte, with the concurrence of Congress, once the peace talks are successfully concluded.”

During the first round of formal talks in August, the parties agreed that “the GRP Panel will immediately recommend to President Rodrigo Roa Duterte the issuance of an Amnesty Proclamation, subject to concurrence of Congress, for the release of prisoners who are listed by the NDFP and who have been arrested, imprisoned, charged, and/or convicted for alleged acts or omissions within the ambit of the Revised Penal Code or special laws in connection with alleged crimes in pursuit of one’s political beliefs.”

Karapatan said it expects the release of three wrongly convicted NDFP peace consultants at the soonest possible time. They are Eduardo Sarmiento from Eastern Visayas, Leopoldo Caloza and Emeterio Antalan from Central Luzon.

As peace consultants, Palabay said the three political prisoners are protected by the Jasig and they should have been immune from arrests and detention. The three are now detained at the National Bilibid Prisons in Muntinlupa City.

Antalan, 57, and Caloza, 59, were convicted of murder. Karapatan maintained there is no material and objective proof of their involvement and actual participation in the said crimes.

Karapatan said Sarmiento, 66, was sentenced in December 2013, to life imprisonment for fabricated charges of illegal possession of firearms and explosives. The group said Sarmiento was convicted “despite compelling proof that the evidence against him were planted and that there were numerous violations on the chain of custody of the said planted evidence.”

Sarmiento serves as the NDF consultant representing the Eastern Visayas Region in the peace negotiations with the GRP since 1986.

The second round of peace negotiations is set to start today in Oslo, Norway.