The gap between the mandated minimum wage and the family living wage has widened over the years.

MANILA – The Duterte government should rank at the top of its priority the need to increase workers’ wages. This is according to the research group IBON’s latest survey results. The respondents ranked at no. 2 and no. 3 the promotion of meaningful and gainful livelihood and improvement of social services. 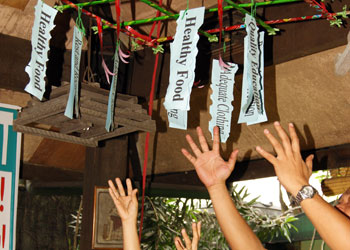 IBON conducted their National Opinion Survey on 1,505 respondents in all regions nationwide. Held from September 1-12, they employed multi-stage probability sampling and field interviews.

Almost a third (31.8 percent) of the respondents wanted Duterte to focus on raising workers’ wages.

About a fifth (19 percent) ranked first the creation of meaningful and gainful livelihood. Fourteen percent ranked at the top the calls to improve social services (education, health, housing, etc.)

For nearly three decades now under the Wage Rationalization Act, wages in the Philippines have been slow at increasing. As a result, the gap between the mandated minimum wage and the family living wage has widened over the years. The highest wage level in the country is less than half the family living wage. The new P491 ($10) daily minimum in NCR is not even 45 percent of the estimated P1,096 ($23) family living wage.

The Defend Job Philippines, a labor NGO which took part in the review, believed the UN committee made these recommendations “with the view of reinstating the country’s national minimum wage.”

The Wage Rationalization Act of 1989 has practically abolished the National Minimum Wage. The Philippines now has thousands of inadequate wage rates. The Philippine Congress also lost its wage-fixing mandate to a tripartite body of appointees.

From 1989 to present, labor groups complained that there had never been much of a wage hike. Under Duterte, the Labor department veered from the previous administrations’ trend. It asked the Regional Wage Boards last September to consider granting a P125 across-the-board wage hike. Past labor officials had always shot that proposal down.

The employers’ groups threatened closure and joblessness if the government granted the wage hike. But, according to IBON Philippines in another statement, the proposed wage hike is actually “necessary, possible and good for the economy.” They said the P125 wage hike is only 12.3 percent of employers’ profits.