Serious about ‘Change is coming’? | Duterte urged to drop the Marcoses

“In taking Duterte to task for having allowed a hero’s burial for Marcos, we are challenging him to stand for our people’s deepest feelings. We challenge him to break free of the Marcoses.”

MANILA – At the Rizal Park on November 25, a small group of people stood under the light rain holding a tarp in support of President Duterte. Along with a larger group of policemen directing the traffic of protesters and vehicles, they watched the procession of people in black crossing the street to join the #MarcosNoHero Black Protest. It was one issue where President Duterte encountered bitter criticisms and strong public protests.


President Duterte still has an alliance with those who led or attended the said protest against the Marcoses. But some of them have admitted that it is now getting more tenuous with Duterte’s political accommodation of the Marcoses, and his praises for some of the widely opposed dictatorial policies.

After Duterte allowed the sneaky burial of the ousted president at the Libingan ng mga Bayani last week, his administration has been included by the protesters in the list of post-Edsa presidents who, they said, contributed to the political comeback of the Marcoses.

All presidents after 1986 had contributed to the political comeback of the Marcoses, former Bayan Muna Partylist Rep. Satur Ocampo said at the Rizal Park protest. Right after the first Edsa People Power, the benefiting political faction was that of the late Cory Aquino, who refused to acknowledge the role of the Left in overthrowing the Marcos dictatorship, Ocampo explained. This, he said, facilitated wheeling and dealing toward political accommodation of the Marcoses.

Despite the people power that sought not only to depose the Marcoses but end its fearsome dictatorial rule, the “Martial Law mindset” was maintained, Ocampo said.

No one was held accountable and charged for Martial Law.

Ocampo said the billions of money stolen from the country were used to buy the Marcoses’ escape from accountability. And now, they have, once again, higher political ambitions.

Starting with Cory’s broken promises of being “the exact opposite of Marcos,” followed by the unimplemented safeguards against trapos, which the 1987 Constitution put in place, much of the people’s aspirations for genuine democracy have been shelved in favor of traditional politician’s self-interests, Ocampo said at the Black Protest.

But President Duterte has promised the country that “change is coming.” He even extended a hand to the Left, which, Ocampo said, was the first and the most consistent and decisive in the struggle against Martial Law and Marcos dictatorship.

“In taking Duterte to task for having allowed a hero’s burial for Marcos, we are challenging him to stand for our people’s deepest feelings. We challenge him to break free of the Marcoses,” Ocampo further said.

He explained that it is not at all a matter of excluding the Ilocanos, but only the Marcoses.

He described the Marcoses as “the quintessential example of bureaucrat capitalism.” This is the systemic use of government position to amass wealth and further entrench themselves in political power, which, in turn, also facilitates continued amassing of wealth and political power.


The protesters in Rizal Park applauded calls to challenge Duterte. Ocampo reminded the protesters that Duterte had claimed he was for change. He dared Duterte now, “Choose whom to uphold: the nation, or the Marcoses?”

Former Senator Wigberto “Bobby” Tañada, with son Erin, a former Deputy Speaker of the House of Representatives, also spoke to the protesters at the park, especially the so-called millennials. They addressed part of their message to President Duterte and the Supreme Court, punctuated here and there by the protesters’ chants of approval.

“No gross abuse of discretion? That’s unacceptable,” the elder Tañada said, referring to President Duterte’s approval of the burial of the dictator Marcos at the Libingan ng mga Bayani.

“How is that not an abuse of discretion when history has declared that Marcos was a dictator, a plunderer, a violator of human rights?” he asked.

Tañada urged President Duterte to change his decision regarding Marcos’s burial. He also prayed that the Supreme Court will act favorably on their pending motion for reconsideration.

Also, present at the Black Protest although he did not speak onstage was former Senator Serge Osmeña.

Gabriela’s Meggie Cruz likened the hero’s burial of Marcos to a slap in the face. She said it’s a gross insult to those who sacrificed much, even their lives and security, so we could regain some of the freedoms denied by Martial Law.

‘Move on my ass’, said some millennials’ placards

From high schoolers of Batasan Hills in Commonwealth and St. Theresa’s College in Quezon City, to medical and nursing students and professionals, college students of UP, UST, Ateneo, La Salle, Earist, PUP, St. Scholastica, Miriam College, Adamson University, Pamantasang Lungsod ng Maynila, San Beda College, and others more who were far from the stage, and also from families of victims of human rights violations during and after Martial Law, most of the protesters last Nov 25 were very responsive. They responded almost as one, as when it came to the Marcos supporters’ favorite reply to protesters: “Move on.”


Standup comedienne Mae Paner aka Juana Change earned a piercing audience reaction for every sentence she uttered onstage. She spoofed the former First Lady Imelda Marcos. In her overdone terno, she first sang Dahil sa Iyo to an effigy of Marcos, which was depicted by Ugatlahi Artists as a corpse with bags full of money. Juana Change parroted the Marcoses’ frequently quoted messages to protesters. Of all the attentively listened to Black Protest speeches, hers took the record of being the most collectively reacted to, gasps for gasps, cheers or jeers.

“As much as I want vengeance, this is for justice,” said the grandson of Primitivo Mijares, former publicist of the Marcoses in the 70s who disappeared after publishing the book ‘The Conjugal Dictatorship.’

An updated version is coming soon, he told the participants of the Black Protest.

“How do we move on? The Marcoses’ plunder left and right hasn’t been brought to justice, the stolen money hasn’t been returned to us yet?” a protester from UP Manila asked in a speech.

Like other protesters, he blamed Marcos and Martial Law for having laid the basis for policies causing the students’ biggest problems today. “How can we move on if the cost of a unit in UP is P1,500? Every year our universities suffer budget cuts?”

“How do we forgive or forget if we’re continually under assault from neoliberal policies?” asked a student from Batasan High School, to loud cheers from the protesters.

The deepest roots of neoliberal policies in the country had been planted with terrorism and repression under the dictatorship. A KMU member said the construction, for example, of the first Export Processing Zones in the country such as those in Bataan, Cavite and Baguio were achieved with battalions of soldiers protecting those who seized peasant lands for the said zones.

Workers were barred by the Marcos dictatorship from engaging in a strike or using unions to bargain for substantial reforms. Until today, said Elmer “Bong” Labog, chairperson of KMU, the repressive and exploitative policies concerning labor trace their roots to Marcos laws and decrees.

Roger Soluta, KMU secretary-general, told Bulatlat how, during Martial Law the first workers’ strike at the five-star Silahis Hotel in Roxas Boulevard, where he worked for 14 years, was turned into a military garrison. “Fully armed soldiers tried to intimidate the strikers and a number of armored personnel carriers surrounded the picketline,” Soluta said.

Among the thousands of protesters who attended with their own placards, Kat Gomez, a 27-year old doctor, told Bulatlat she participated in the Black Protest because as a doctor who has been in public and private hospitals, she sees everyday how patients have to pay for the debts Marcos saddled us with.


Many are dying because hospital services are getting costlier and the people’s income are not catching up. The yearly budget on health is inadequate because the country has to set aside money for debt repayment, many of which were contracted during Marcos’ rule. In fact, debt-dependence began to deepen during his rule. Gomez said many are dying for failure to pay the needed healthcare. She said even children are paying with malnutrition for Marcos’s debt and corruption.

Her IT professional friend, Lee Chua, also 27 years old, is from a family of Marcos loyalists.

Around him, high schoolers tirelessly held their own placards and shouted with the rest of the protesters everytime the Black Protest program chose to chant, for example, “Marcos, Hitler, Diktador, Pasista!”

Onstage, Timothy Romero of Philippine Normal University, a school for training teachers, said in a speech that student councils and publications were shut down under Marcos to prevent protests and clamp down on reports about what were really happening in the country.

He said it is a sin to remain silent when someone like Marcos was buried as a hero. And “That’s also a violation of the teaching profession,” he added.

“What’s the point in teaching history if the state recognizes Marcos as a hero?” he asked.

“Maybe it’s Duterte who’s on drugs,” Vencer Crisostomo of Anakbayan said, to loud cheers and gasps from the Black Protesters.

The Black Protest organizers estimated that 15,000 protesters participated in the afternoon program alone. It began promptly at 4 p.m. and lasted until later than 9 p.m.

“This day is important because the system, the courts, the politicians have failed us. From now on we can rely only on the people to frustrate the higher political ambitions of the Marcoses,” Bayan secretary general Renato Reyes said. 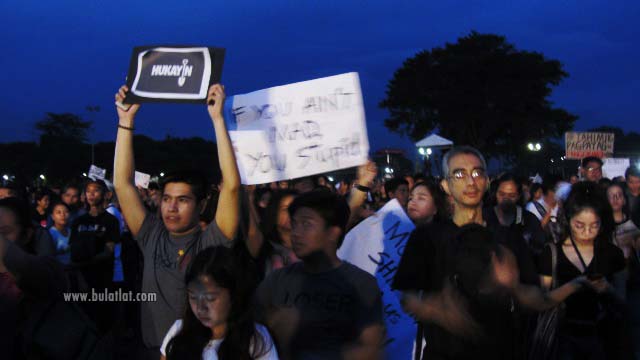 He said Filipinos have a problem with a political system that, contrary to people power’s aspirations, still frustrated the demands for accountability, the return of stolen wealth, and meting out justice for the crimes of the Marcoses.

He said that within the processes of state, the church, the media, and the politicians, the quest for justice may continue to be frustrated by the Marcoses. But among the people, “We will not be defeated. We will not back down.” Reyes led a modern day version of one of the anti-Marcos years’ favorite symbolic protests, the act of lighting one small candle than cursing the darkness of Martial Law. Thousands of participants of the second Black Protest raised their lit up gadgets in agreement.