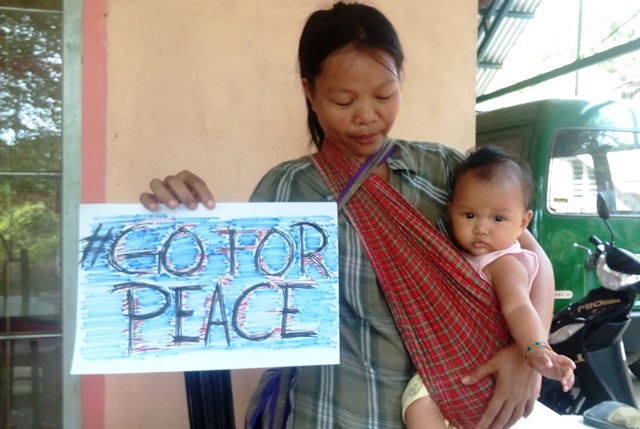 “Instead of pursuing a senseless all-out war, the President should devote more government efforts to carry on peace negotiations with revolutionary groups, especially with the CPP-NPA-NDFP, and resolve the roots of armed conflict, which is social injustice.”

MANILA – Mother’s Day usually means the two children of Aileen “Ka Pia” Serna, a member of the New People’s Army (NPA), would receive at least a phone call from her. This Mother’s Day and in the years to come, that will no longer happen for the two children. Serna was killed in a firefight with the 76th Infantry Battalion-Philippine Army (76IBPA) troops in Sta. Cruz, Occidental Mindoro on May 8.

This Mother’s Day, her children reunited with her for the last time when the mother’s closed casket was brought to their home. The Buhay na Alay para sa Nagkakaisang Mindoro (BAYANIMO), an alliance of victims of human rights violations in Mindoro, grieved with her children.

Rev. Glofie Baluntong, the spokesperson of BAYANIMO, said moments such as this comprise the tragic price of President Rodrigo Duterte’s all-out war policy.


“Instead of pursuing a senseless all-out war, the President should devote more government efforts to carry on peace negotiations with revolutionary groups, especially with the CPP-NPA-NDFP, and resolve the roots of armed conflict, which is social injustice,” Baluntong said.

On Monday, May 15, BAYANIMO is set to conduct a fact-finding mission in Sta. Cruz, Occidental Mindoro. After the firefight on May 8 that took a mother’s life, reports reached the group that the government troops also committed many other cases of human rights abuses in the area.

“Duterte’s all-out war policy is seriously disrupting people’s lives and violating their civil rights; this policy is becoming more and more a war against the people,” Baluntong said.

BAYANIMO is disturbed to see that Duterte’s ‘inner circle’ is fast becoming “dominated by technocrats and military officials.” But Baluntong said they still “strongly hold out for a peace platform that this government has promised.

May 13 marks the full year since President Rodrigo R. Duterte was elected to the presidency.

In another statement, Karapatan Sorsogon said the overwhelming vote given to Duterte was a sheer expression of the people’s desire for meaningful change and their response to the promises he made in the heat of the electoral campaign. Similar to the calls from the Mindoro rights alliance, Karapatan Sorsogon urged the Duterte administration to flesh out his campaign slogans and promises. It protested the administration’s all-out war including its drugs war, saying the poor and the impoverished Filipinos are the real victims of this “murderous rampage.”