“We oppose all tendencies toward Martial Law, toward totalitarian rule, toward tyranny, toward a decreasing democratic space.”

MANILA – The crowd was a friendly, cheerful mix of old and young. There were schoolkids, millennials, middle-aged and seniors. Their placards and printed out tarps were witty yet angry and committed to fighting the return of, or tendencies toward, Martial Law, extra-judicial killings, corruption, and tyranny. They clapped, chanted and sang as a group and many stayed despite the rains toward the end of the program. 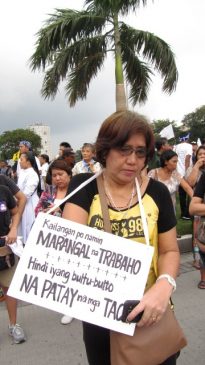 A slice of Luneta near Jose Rizal’s monument was bustling earlier than 4 p.m. on September 21. Black-clad protesters arrived in groups with their placards. Around 5 p.m. the brightly-lit stage welcomed the arrival of marchers from Mendiola. The marchers were mostly comprised of the Sandugo’s Lakbayan ng Pambansang Minorya. They had spent the good part of the day protesting martial law in Mindanao and the tendencies toward martial law nationwide. There were at least two video walls to bring images of the Luneta rally’s program to those at the back.

Various speakers celebrated the “multi-colored” affiliations of the participants. Speakers said the Luneta rally was neither red nor yellow, but a united front of various sectors and groups against Martial Law.

Another speaker praised the coming together of representatives of the poor, the middle class and the upper class in the September 21 Luneta rally. Mostly the youth and students and religious made up the crowd near the stage. Professionals mingled with workers, teachers, and the indigenous peoples and Moro from Sandugo.

Emcees estimated the Luneta Martial Law protesters to have begun with around six thousand and reached 30,000 at some point. Veteran activists against Martial Law led the first speakers, beginning with “super-senior” Sister Mary John Mananzan and former Bayan Muna Rep. Neri Colmenares. The latter was 18 years old when Marcos declared Martial Law. He was imprisoned for four years. His statements of ‘no compromise with the Marcoses,’ “there is no moving on or reconciliation without justice or accountability,” were greeted with loud cheers and chants of ‘No To Martial Law.’


“Life is a precious gift, we should all protect it,” Mananzan said. She praised the gathered opponents of returning Martial Law, as she bemoaned “the culture of death” and how “life is getting very cheap” nowadays.

“We oppose all tendencies toward Martial Law, toward totalitarian rule, toward tyranny, toward a decreasing democratic space,” Sr. Mary John said to loud cheers and chants of “Never Again, Never Again to Martial Law.”

The nun vowed that despite her super-senior age she will never stop fighting the return or the tendencies toward Martial Law. She praised the gathered protesters and the fact that “courage is infectious.”

Martial Law then and now

The Luneta rally marked the 45th anniversary of the late dictator Ferdinand Marcos’ declaration of Martial Law on Sept 21, 1972. However, it recognized and especially called attention to the fact that there are aspects of Martial Law still in place in the Philippines.


A mother of a 16-year old victim of tokhang (police raids under the Duterte government’s drug war), nanay Emily, said at the program that it hurts so bad now, the killings and the violence and misery unleashed mostly against the poor. She sent a message to President Duterte: “You also have a family. You should know how painful it is to lose a member of your family.”

Young student Beverly Gofredo of Save Our Schools network, meanwhile, bewailed the deployment of military and its harassment of their school teachers and administrators in the lumad schools in Mindanao hinterlands.

“We are furious. The government has not given us aid to build and run any of our schools. Instead, they are encamping and destroying it, and the president has even threatened to bomb our schools,” said Gofredo. She bewailed how the government’s counter-insurgency war is killing their dreams.

The Duterte government’s ‘Oplan Kapayapan’, its counter-insurgency war, lumps the unarmed indigenous people and activists with armed revolutionaries and treats them as targets of their war. Advocates for human rights reported that it has resulted in the forced closure of Lumad schools, trumped-up charges against its teachers, illegal arrests, killings of some of the schools’ leaders and students. Peasants and environmentalists reported that among the growing list of extra-judicially killed are defenders of the environment against destructive mining, dams and logging, and advocates of genuine land reform.

Leaders of various groups denounced the “US-Duterte regime’s wars,” its war on drugs, the war against so-called terrorists and war against so-called insurgents. Speaking at Luneta, Aida Ibrahim of Tindeg Ranao, a Marawi siege survivors’ organization, said the real terrorists they see in the war in Mindanao is the US-Duterte regime. “This regime’s tokhang, Oplan Kapayapaan and ‘war on terrorism’ are not the solutions to the people’s basic problem of poverty.” 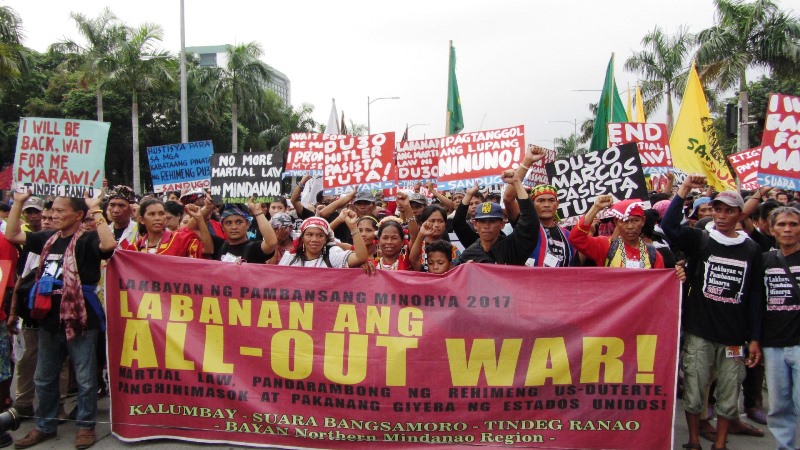 Ibrahim described the US-Duterte regime as the real terrorists as “they are the killers of our people.”

She condemned the air strikes that all but pulverized Marawi, the country’s lone Islamic City. Now the city is under military control, a far cry from its pre-martial law situation when it was under the Muslim Maranao’c control.

The air strikes and the “rehabilitation plans” for Marawi feature big business groups and US military as among the interest groups.

Datu Jerome Succor Aba, Moro leader of Sandugo alliance of indigenous peoples and Moro, said during the Luneta rally that Sept. 21 also marked the final day of the Lakbayan ng Pambansang Minorya para sa Sariling Pagpapasya. He announced the success of the Lakbayan in fighting the Duterte regime’s fascism.

In 21 days of camping out at UP Diliman and sending protest delegations to various government and corporate offices, the Lakbayanis delivered in the capital direct eyewitness accounts of ongoing plunder of indigenous and Moro lands, the baseless war in Marawi, the forcible closure of Lumad schools and other projects inimical to their ancestral lands and culture.

“And we had thought President Duterte was different. He had promised to be for peace, that he’s a relative of the Maranao, and he’s from Mindanao,” Aba said.

Sr. Mary John Mananzan said she would not enumerate the schools, colleges, and universities with students and employees in the Luneta rally, fearing she might fail to mention all of those present. But students made up most of the crowd especially at the front, and they made their presence felt in their placards, chants, and speakers. 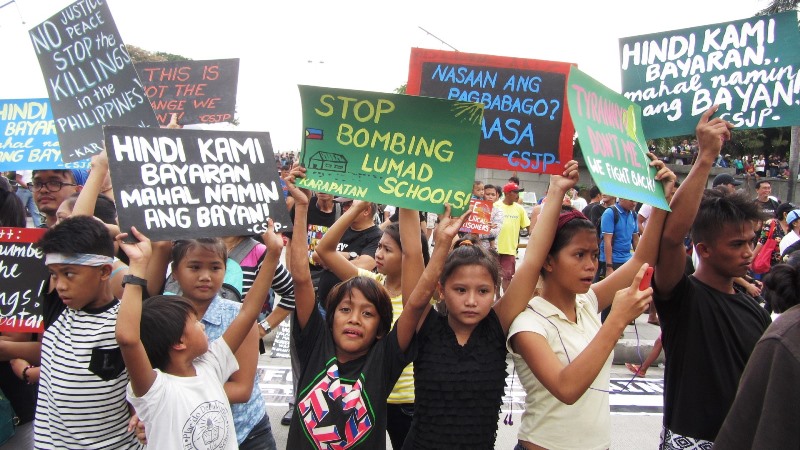 “It is okay to be absent from schools to join protests. What’s important is to be present in the making of our history,” said Raoul Manuel, leader of Youth Act Now, a national network of students’ councils and publications. He said the whole country held protests on Sept. 21, and not just in Luneta. There were protests in the Cordillera, Cagayan Valley, Central Luzon, Southern Tagalog, Panay, Cebu, Tacloban and various areas in Mindanao.

The Luneta rally program interspersed speeches of survivors of Martial Law, extra-judicial killings, political prisoners, actors such as Pen Medina and Mae Paner, with poetry and musical numbers from Bituin Escalante, Buklod, Alab band, Save our Schools chorale, Philippine Educational Theater Association (PETA), and a stage-full of professional singers and theater artists launching a Filipino version of “Do You Hear the People Sing” from the Les Miserables musical. They capped the Luneta rally with the song ‘Bayan Ko,’ one of the theme songs of the 1986 People Power.