Why Lumad children persist in fight for right to education

Lumad students and their teachers are still camped out at the Department of Education central office in Pasig City.

MANILA – It has been three years since Manobo student Monteza Uban, 18, and her family fled from their home in White Culaman village, Kitaotao, Bukidnon province. The military swooped down on their community in late August of 2015, and arrested peasant leaders whom they branded as New People’s Army (NPA) guerillas. Their school, the Mindanao Interfaith Services Foundation Inc. (Misfi) Academy was then forcibly closed through the orders of their village chief.

Already a Grade 10 student, she said, she gravely misses her school and village, where the air is fresh and the trees are tall and green. They have been staying in the United Church of Christ in Philippines (UCCP) Haran House in Davao City because the military is still in their area.

Uban and her fellow Lumad children have been here in Manila since August for the Lakbayan ng Pambansang Minorya. They are calling for Education Secretary Leonor Briones to act on their calls: put an end to the attacks on their schools, grant recognition and permits to Lumad schools, and the revocation of Department of Education Memorandum Order 221 series of 2013 which allows the presence of soldiers of the the Armed Forces of the Philippines in schools.

Under the Duterte administration, Lumad students have held several protests outside the DepEd office in Pasig, as they ask Briones to hear their plea. Rius Valle, the Save our Schools Network Mindanao spokesperson said their first meeting was in July 2016.

“She was welcoming then, and gave her commitment to act on our concerns,” he said adding that Briones said that she would review DepEd Memo 221 and would support initiatives of the Lumad schools.

But no action was made after their first meeting. Later, DepEd would not even respond to their letters requesting for an appointment.

Meanwhile, in her statements to media, Briones asserted that the department is doing its part to protect the interest of the Lumad children. But Valle said she has not made any concrete action to address their calls.

Lumad communities can stand on their own

Valle said the Lumad communities have survived without any support from the government. They have subsisted and developed their own production, while nurturing the environment around them, he added.

“They can be independent. They can even feed the whole community. They do not have this problem until the military came,” he said.

With the help of religious institutions and non-government organizations, the Lumad communities have developed their own water supply system, sustainable agriculture, communal farms and schools.

It also helped that the Lumad, who have long been denied of social services like education, could now read, write and most of all, are aware of their rights to their ancestral lands. Education came not only for the young students, but also their parents.

Jeorge Tacardon, 24, is from Iloilo but has volunteered as a teacher of Misfi Academy. He said they also teach the parents every weekend.

“The whole community wanted to learn,” he said. Back in the day, the illiterate Lumad was easily exploited. “Before, 10 hectares of land can be bought for only 10 cans of sardines and a tobacco,” he told Bulatlat.

Now, they know how to compute and can sell their products at the right price.

Tacardon is an Agriculture major and was a scholar of the slain Italian priest, Fr. Fausto “Pops” Tentorio. He has been a teacher of Misfi since 2015.

“We are teachers not only to Lumad children but to the whole community, because in the end, it is the community that will protect the land from the land grabbers,” he said.

Not only a school for Lumad

Tacardon said their school is not only a school for the Lumad but also for others who needed an education.

“Our students are Lumad, Christian and Muslim. Everyone, regardless of their ethnicity and religion, can study in our school,” he said.

Jenny Paraiso, 16, a Grade 9 student of Misfi Academy in White Culaman is a Christian. She transferred to Misfi where everything is provided in the school. She said there are many expenses in the DepEd school, like uniform and projects.

But their family, who are farmers, cannot afford the expenses so she transferred to Misfi. “We don’t have to worry about anything in our school since it is a boarding school,” she said.

That is why she is enraged that her school is now closed down due to military encampment.

“The government is destroying our future,” she said said they cannot return to their village because there are still soldiers in their area.

“I miss our school. I miss farming,” Paraiso said. She added that in Haran, they go to their farms only every Saturday.

Valle said there are also DepEd schools in far-flung areas, but many are not sustained because teachers are not residents of the community.

Valle said most teachers only hold classes for three days: teachers go to the community on Mondays, spending a whole day of travel, and classes start Tuesday. Teachers then leave the area on Thursday.

“They call it, ‘Good morning Tuesday. Goodbye Thursday,’” he said. That is why, he added, parents also persevere to build the school in their community.

In contrast, teachers in Lumad schools living in the community. Teachers dedicate their time to the school and will only come home once or twice a year.

Tacardon said it is part of their commitment to the Lumad community. For him, he is only doing what Tentorio has taught them, to live simply and continue helping others.

Valle added that even teachers of the DepEd schools are terrified of the soldiers whose barracks are near the school facilities.

The Lumad schools have been constant target of the military, who allege that the schools are operated by the New People’s Army (NPA). But what made it worse is the implementation of DepEd Memo which allows the presence of soldiers in school premises. 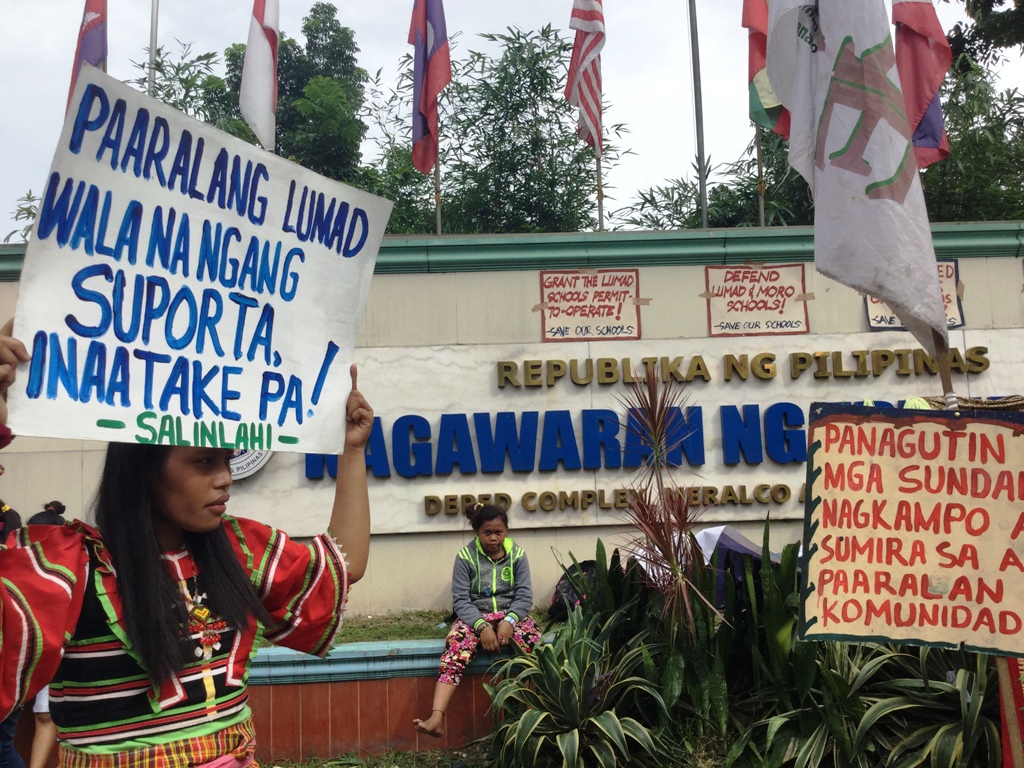 Valle said because of the attacks, at least 39 Lumad schools were forcibly closed. At least 33 are schools operated by the Center for Lumad Advocacy, Networking and Services, Inc. (Clans) in regions of Soccsksargen, Southern Mindanao Region and Caraga region.

Misfi Academy in White Culaman for one, was forcibly closed on the allegation that it supports the NPA.

Valle said they used all legal measures to end the attacks on these schools. They filed complaints with local government units, the DepEd regional offices, and even the courts, but the complaints did not prosper.

In DepEd regional offices, he said, officials are telling them that it was out of their jurisdiction because it is a rights violation and complaints should be filed before the Commission on Human Rights. “They’re giving us a runaround,” he said in an interview with Bulatlat.

Clans executive director Geming Andrea Alonzo lamented how DepEd evades its responsibility and passes the buck to other agencies.

“DepEd stands blindly with the idea that it does not have any investigative power over cases such as illegal detentions, arrests, red-tagging and even killings, while the sole reason for all the havoc wrecked upon the innocent communities is the implementation of the accursed memorandum,” Alonzo said in a statement referring to DepEd Memo 221.

Instead, DepEd “has the audacity to avoid the ‘brutal truth,’” she added.

Fighting for their future, dreams

Both Uban and Paraiso dream to be teachers one day.

“I want to help my fellow Lumad, too,” said Uban. For Paraiso, she wants help those in need, Lumad or not.

Valle said with the continuous attacks on schools, the government is taking away the Lumad children’s right to education which they have failed to provide from the beginning.

He said the attacks seem intent on keeping the Lumad community illiterate, to give way to plunder in the ancestral lands that are rich in natural resources.

But the teachers and the students vow to continue their fight for education and their ancestral lands.

“That is why we are here to let the people now of our situation and to let the government now that we continue to fight for our future,” Uban said.

The Lumad children here in Manila need your help. Save Our Schools Network is accepting donations, in cash or goods. Contact Rius Valle – 0946 657 8594 for your donations.