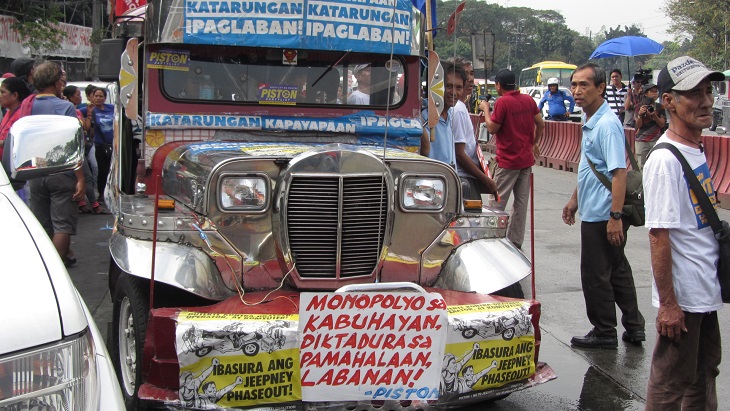 The apprehensions and the stiff fines have prompted operators to temporarily sideline their jeepneys, resulting in reduced number of jeepneys plying the streets thereby creating more difficulties for commuters.

MANILA – Members and allies of Pagkakaisa ng Tsuper at Opereytor Nationwide (Piston) and the No To Jeepney Phaseout Coalition staged a protest rally on January 24 from the Quezon Memorial Circle to the headquarters of the Land Transportation and Franchising Regulatory Board (LTFRB). They made it clear that it was not a transport strike, a response to what they described as misrepresentation and “paranoid” responses of transport officials of the Duterte administration. Still, as they gathered, they noted formations of policemen trying to intimidate the rallyists. At one point, the police tried to direct an empty bus into parking where the jeepney drivers were holding a program.

The drivers were protesting the actions of the Inter-Agency Council on Traffic (I-Act) under the LTFRB, saying this is the start of the costly, unacceptable and anti-poor jeepney phaseout. Since January 8, the LTFRB has apprehended jeepney drivers on the road and imposed fines citing their dilapidated vehicles.

The apprehensions and the stiff fines have prompted operators to temporarily sideline their jeepneys. The result is less number of jeepneys plying the road. In turn, it resulted in increased difficulties and higher transportation costs for commuters, and reduced to no income for drivers and operators.

Ruben Baylon, general secretary of Piston in the National Capital Region, said almost all routes in the capital are being “blighted” (perwisyo) everyday by I-Act. Asked what charges the I-Act cites when it apprehends drivers and imposes fines, Baylon said the lowest violation with P10,000 fine is about “defective accessories.”

Piston said they are also for modernizing and improving their vehicles, but they are proposing a cooperation with the government in rehabilitating the current jeepney instead of the forced phaseout. However, their proposal has consistently been rebuffed by transport officials. The attempt of the January 24 protest to bring the jeepney rehabilitation proposal was also rebuffed.

Under the government’s jeepney “modernization” plan, they will junk all the current running jeeps in batches in three years, 2018 to 2020, and force its replacement with new units costing at least P1.5-million ($29,520) each. The LTFRB’s Omnibus Franchising Guide has no place for small operators with few units. Operators must enter a fleet management system if they own just one or a few units. 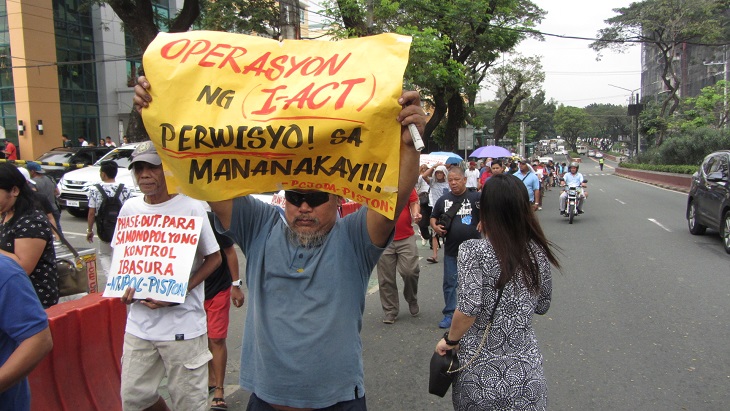 To the drivers’ groups this provision is another way for corporations to corner the routes of today’s jeepneys. If this happens, they said, they will lose their livelihood and the commuters will lose a relatively affordable mode of transportation. They said that through jeepney rehabilitation, it can be prevented from happening. But in an impromptu dialogue with LTFRB chairman Martin Delgra III a the gates of the LTFRB on January 24, Delgra rejected the drivers’ proposed jeepney rehabilitation.

There is an estimated 60,000 to 70,000 public utility jeepneys in Metro Manila alone, and 200,000 all over the country. Under the “5-6-7” offer of the Duterte government to jeepney operators, the government will finance the needed five percent equity per unit. The government promises to release public funds directly to banks to start the processing of each loan of any willing (and qualified) driver or operator. The latter is required to pay it back at six percent interest over seven years. This government-vetted jeepney is four to five times more costly than the locally assembled jeepneys currently plying the roads.

At a forum of commuters’ groups under SUKI (Samahan at Ugnayan ng mga Konsyumer ng Ikauuland ng bayan) late last year, they concluded that it is highly unlikely that each driver can earn enough to repay the loan, and still provide for his family. SUKI supported the rehabilitation proposal of transport groups saying it will improve transportation without necessarily increasing the fares or making life harder for the drivers-operators.

As of now, that hard life has the face of I-Act. But it need not be so, the drivers said. They, too, wanted modernization, they said. They just don’t want to hand transportation over to huge corporations. 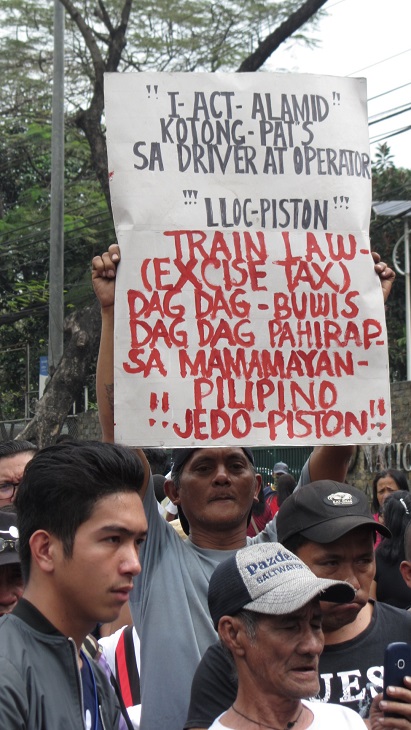 Before attending the day’s transport protest, George San Mateo, national president of Piston, had to attend a hearing at the Quezon City Metropolitan Trial Court. The government filed charges against him for his role in the transport strikes last year. On January 24, the charges was read to him in court. Despite this, Piston and the No To Jeepney Phaseout coalition ended the day’s protest with vows to launch another transport strike soon. They appealed for public support and understanding, saying it is the Duterte government who is bringing hardship to the commuters, drivers and operators.