How oil deregulation and tax reform burden the poor

Such additional tax burden is enough to buy one to three kilos of rice (P27 per kilo of regular NFA rice or P37 a kilo of regular commercial rice) for their family’s consumption.

MANILA — Since the deregulation of the oil industry in the country and the imposition of the value added tax (VAT) on petroleum products, the prices of diesel and gasoline have increased four to five times faster than the minimum wage of workers.

But this is still not enough for President Duterte and his neoliberal economic managers.

Since the start of the year, consumers have been doubly hit with price increases in petroleum products.

First blow – for the fourth straight week, oil companies have again raised oil prices because of supposed price movements in the world market. The latest round of price adjustments brought the total oil price hike (OPH) due to global price movements this year at P1.35 per liter for gasoline, P2.25 for diesel, and P2.10 for kerosene.

The country’s oil industry has been deregulated since 1996, which allows oil firms to automatically adjust pump prices every week supposedly to reflect oil price movements in the world market.

The second blow – the new excise taxes on oil products under the TRAIN (Tax Reform for Acceleration and Inclusion) are expected to be already implemented by all gas stations nationwide within the month. The Department of Energy (DOE) earlier said that the OPH due to the TRAIN was at P2.97 per liter on gasoline, P2.80 on diesel, and P3.30 on kerosene – including the 12-percent VAT.

This means that the combined impact of TRAIN and deregulation on oil prices so far this month is around P4.32 per liter for gasoline; P5.05 for diesel; and P5.40 for kerosene. 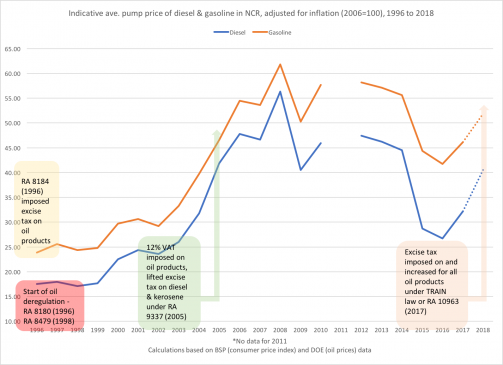 In fact, the government’s tax revenues from oil products would be much higher. Excise taxes (and other taxes) on imported petroleum products are included in the computation of the VAT on pump prices. Because TRAIN will raise the excise tax, the VAT on oil will also increase. All of these would be shouldered by the public.

Such additional tax burden is enough to buy one to three kilos of rice (P27 per kilo of regular NFA rice or P37 a kilo of regular commercial rice) for their family’s consumption.

But even worse is that OPH also has a domino effect on the prices of other basic commodities and services. In the meantime, the super-rich get even more discounts for their luxurious lifestyle under the TRAIN.

Before Duterte’s TRAIN, consumers have already been suffering from the adverse impact on the cost of living of deregulation and oil taxes for a long time. Deregulation began in 1996. Compared to their real prices (adjusted for inflation) today and at the onset of deregulation, the price of gasoline and diesel has more than doubled.

The estimated rate of increase in diesel pump prices in Metro Manila between 1996 and 2018 is at 131 percent while gasoline is 118 percent. During the same period, the real wage of minimum wage workers in Metro Manila grew by only 27 percent.

And this is just the first half of TRAIN’s package. After completing package, there are four more packages of tax reforms that the administration plans to implement, according to its economic managers. Brace yourselves.