Wage hikes will not cause higher prices — IBON 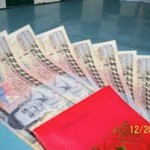 On the contrary, said IBON, wage hikes should not result in higher prices since they form part of the profits and not of production costs. Legislating a decent minimum wage is possible, IBON said, because the economy and corporations have been making more than enough profits to support the workers and their families.

Latest data from the 2015 Annual Survey of Philippine Business and Industry (ASPBI) indicate that 216,995 establishments of all employment sizes have Php15.1 trillion in total profits and 5.8 million employees. Raising the Php378.71 average daily basic pay (ADBP) of workers to, say, Php750, will only transfer 28.6 percent of these profits. Applying this to bigger establishments (with 200 workers and more) that account for Php1.2 trillion in profits and 2 million employees, just transfers 18 percent of profits, said the research group.

While large corporations can more easily fund a substantial wage increase than can micro, small, and medium enterprises, it doesn’t mean the latter can be exempted from increasing the workers’ wages. IBON said the government can assist these small companies. “This can be in the form of irrigation facilities, farm-to-market roads, improving production and storage facilities especially in agriculture, giving tax breaks and incentives, marketing support, and local integration of supply chains, among others.”


Another reason why a substantial wage hike is in order is the fact that the wealth the workers produce for the economy and companies is far more than they are being paid, the research group said. Latest official data show that labor productivity is practically at Php1,317.52 per day in 2015 while the ADBP (average daily basic pay) of Php378.71 during the same period only comprised 29 percent of this value. Increasing Filipino workers’ incomes will also increase their consumption capacity, stimulating demand for goods and services in the domestic market.

IBON said the government and corporations should stop using the threat of price hikes to deny the Filipino workers a substantial and decent national minimum wage. “Not only is increasing worker’s wages doable and just; it is also necessary to cope with the rising cost of living that is being aggravated by the Duterte administration’s continued implementation of the Tax Reform for Acceleration and Inclusion (TRAIN) Law.”