As Migrante summed it up, the widespread consequences of Duterte’s labor export policies and contractualization laws have generated more Mary Janes: women obliged to work abroad only to be baselessly accused of crimes punishable by death; or maybe, more Nanay Celia’s who have lost faith in a government tolerating such injustices.

MANILA — Before Mary Jane Veloso’s harsh jail sentence in Indonesia, her mother, Nanay Celia, has had her own share of horrors of being an OFW in the Middle East. She couldn’t forget the first time she was compelled to search for greener pastures. Mary Jane was just six years old at the time.

“I’ve experienced being slapped in the face, I became deaf for two weeks. They pulled at my hair, poured hot water on me. I endured it for just three months, and then I asked for help from a friend so I could escape,” Nanay Celia said as she recalled the series of abuses she suffered as a domestic helper in the Middle East.

She also shared how her two other daughters, Leah and Maritess, who are also both mothers now, have experienced domestic abuse from their employers in Dammam and Bahrain, respectively.

“Leah was crippled in Barrain because she was abused by her master. Marites had a 50-50 chance of life in Bahrain too; she was banned there due to her illegal recruiters. We’ve raised funds for their fare back here in the Philippines despite the uncertain job opportunities here.”

With the Philippine government’s four decades of labor export policy, Filipino women migrants have shown to be more vulnerable to abuse and exploitation. Migrante International has listed 196 cases of deaths from 2016; 1,549 cases of maltreatments, and 308 cases of rape and sexual abuses in Kuwait alone. Of the 3,827 convicted OFWs in other countries, 130 are in the death row – and majority are women. 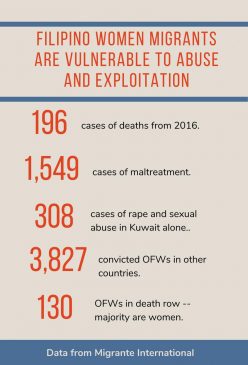 A resource speaker from Gabriela Philippines reported, in Migrante’s forum, the huge implication of job insecurity to Filipina workers. In the country, women workers in factories are usually assigned in quality control. Majority of women laborers are in retail trade such as malls.

“Most of the salesladies in malls are victims of the 5-5-5. The company let go of their workers after five months, so they could not be regular employees as provided by law. The country’s labor laws said companies must implement regularization of their workers after six months on the job,” Gabriela Spokesperson Sheryl Alapad said.

Gabriela’s studies showed that there are 1.16 Million Filipino women contractuals in the country, and only 19 out of every 100,000 workers have the right to unionize. Migrante International added to this data that in the growing deployment of OFWs in the Middle East, majority are women. As of 2018, a little over half (53.7 percent) of Filipino migrants are women. Of these, 60 percent are known to be working under elementary occupations and household service work like Nanay Celia once did and now her daughters.

The four decades of Philippine Labor Export Policy have undoubtedly produced more and more Filipina migrants compelled to endure unsavory circumstances abroad to support their families at home. Overseas Filipina workers have gone beyond being domestic helpers in the Middle East; they are now also massage therapists, hotel caretakers, nurses, cooks, etc. Labor migration has become a chronic phenomenon for the Filipina who cannot find a stable job with decent wages in her own country. But she takes on another layer of susceptibility to abuse as she seeks greener pastures outside her home country.

With the uncertainties brought about by Mary Jane’s case, Nanay Celia’s hopes and resilience now spring from the echoing calls of fellow migrants and advocates for the rights of all Filipino migrants.

If only there are decent jobs here in the Philippines, then I would not have allowed my daughters to work abroad,” Nanay Celia said.

As Migrante summed it up, the widespread consequences of Duterte’s labor export policies and contractualization laws have generated more Mary Janes: women obliged to work abroad only to be baselessly accused of crimes punishable by death; or maybe, more Nanay Celia’s who have lost faith in a government tolerating such injustices.

“I got acquainted with Migrante at the height of Mary Jane’s trial in February 2015. Before, we had no means to air our grievances. I’ve seen that no matter how much support Mary Jane gets from the public, if we have this kind of government, nothing will change. We need to fight even more,” Nanay Celia ended.

Part 1 of 2: Mary Jane Veloso, 3 years after the reprieve