Inside the courtroom with the ‘butcher’ and other funny musings 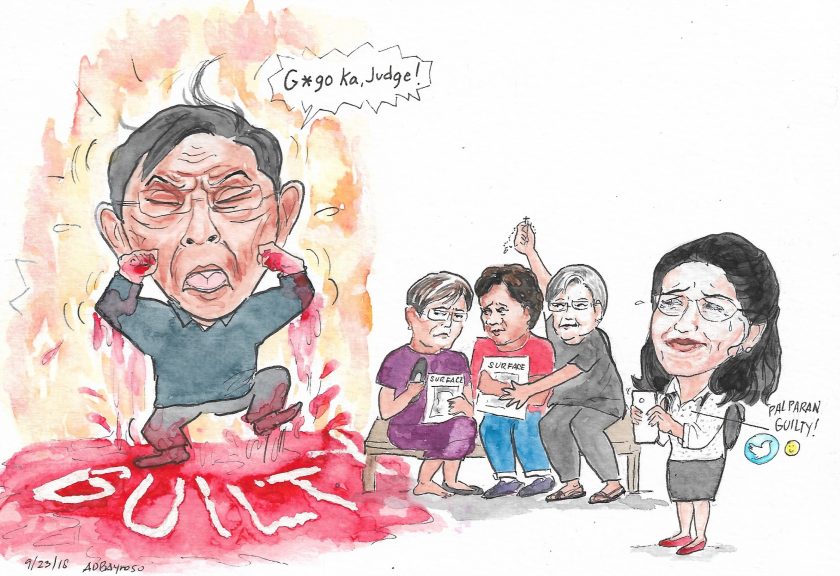 By JANESS ANN J. ELLAO
On the fringes
Bulatlat.com

MALOLOS, Bulacan – Having earned a reputation for being both loquacious and boisterous, my relatives, friends, colleagues, and even sources are very much curious on how I manage to keep a straight face whenever I cover issues of human rights violations, especially during hearings against a notorious ‘butcher’ in a courtroom packed with at least a dozen soldiers.

There is always room for knowing smiles, snickers, and half-suppressed giggles during these times even when Edith Burgos, the mother of disappeared farmer-activist Jonas Burgos, said she could feel heart up her throat or Concepcion Empeño, mother of disappeared Karen, was profusely sweating because of the tension as we all waited for the promulgation against retired Maj. Gen. Jovito Palparan to start.

Humor, after all, has kept them sane, Mrs. B said. And I can say that it goes for me as well
.
1. Prayers

As proof of my well-deserved reputation, Mrs. B was just too excited to make me sit next to her – right beside the mothers of the disappeared students – with a look on her face that she is about to tell me a funny story.

Apparently, before I arrived at the courtroom, the stockiest of the soldiers was bullying those attending the hearing to stop using their mobile phones while they were waiting for the promulgation to begin. He walked around the small courtroom – the burly guy that he is – as if he owned every inch of it.

So what did the witty woman who just turned 75, (Happy birthday!), do? She asserted that they could still use their mobile phones and with a rosary in her hand, she made a cross in the air in the face of the said soldier. Hah.

Many kilometers away from the courtroom, the friends of Mrs. B from the religious community offered their prayers, asking for divine intervention for justice to be served.

Erlinda Cadapan, mother of disappeared student Sherlyn, had once tried to hit Palparan with her shoe out of frustration and anger. It was, of course, no match to the burly soldiers guarding him. It did not even hit a single strand of his hair. The following hearing, Palparan’s lawyer complained about it before the judge, saying his client was bloodied because of the shoe incident.

And so during the promulgation, all eyes were on Cadapan and her shoes. The question everyone wanted to pop was: Will she render a “revolu-shoe-nary” justice with a five-inch stiletto?

Surpisingly, Cadapan was wearing flats, which she borrowed from a rather reluctant friend who is most probably worried that she will never get her shoes back.

“I really promised to return it,” she jested.

In the end, Cadapan and the rest of the victims finally achieved the ever elusive “husti-shoe” with Palparan’s conviction.

As the dispositive portion of the 31-page decision was being read, I was personally expecting cheers and woo-hoos from the mothers of the disappeared students, along with human rights workers who were accompanying them. Come on, this is the victory everyone has been waiting for. Instead, there were quiet sobs. They hugged and comforted each other.

Meanwhile, Palparan was making a scene and hurling invectives against Judge Alexander Tamayo, whom the retired general called, “g*go” and “duwag” (fool, coward). He continued to do so even when the mothers and their supporters were already heading out of the courtroom.

It was impossible not to be moved to tears. I was trying to blink tears back as I tweeted the guilty verdict when a fellow reporter asked me, “ilang taon daw makukulong si Palparan?” (How many years was the sentence?)

I tried to rake my brain for an answer but there was nothing, “Ay, hindi ko narinig. Haha.” (Oh sorry, I didn’t hear it.”