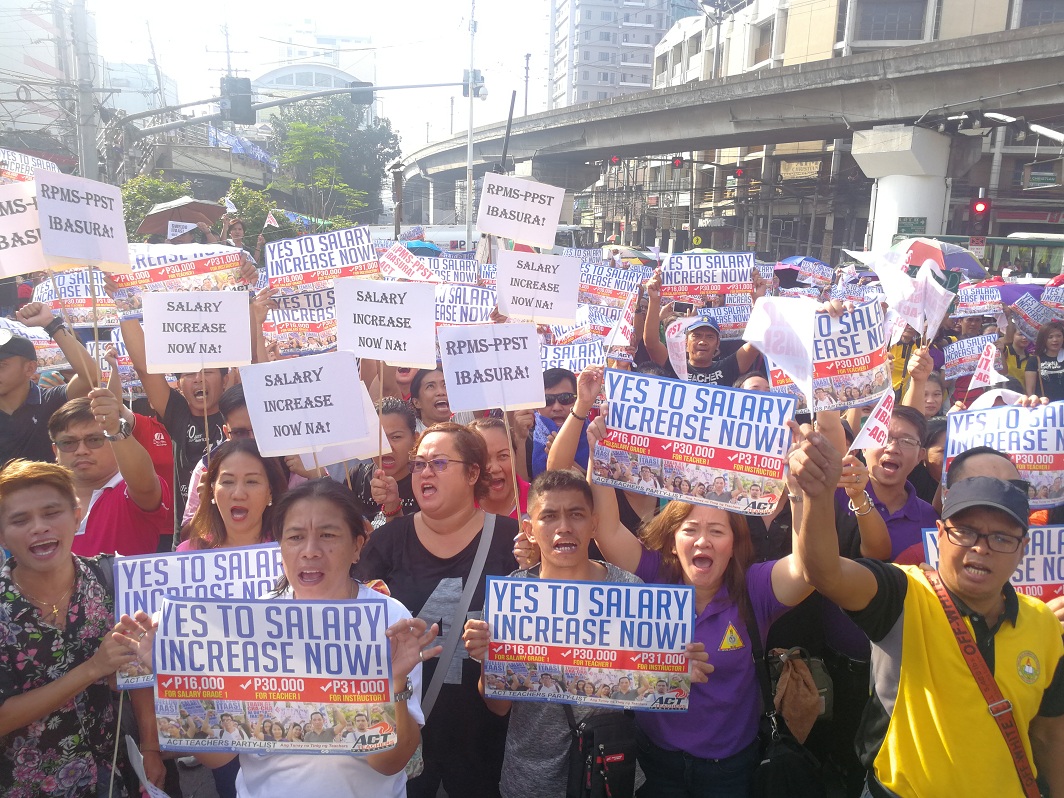 “Amid the opposition to this measure by Duterte, Education Secretary Leonor Briones, Budget Secretary Benjamin Diokno and the rest of the economic managers, teachers are even more adamant in demanding for their immediate pay hike.”

MANILA – On World Teachers Day, at least 2,500 public school teachers from all over Metro Manila took the streets to call on the government to act on their legitimate demands.

For teachers, honoring them means not only extravagant celebration of teachers’ day, having free spa or flowers from their students but also the fulfillment of Duterte’s promise of salary increase for teachers.

Joselyn Martinez, national president of Alliance of Concerned Teachers-Philippines, said during the program, Oct. 5 at the foot of Chino Roces bridge, “We never ask for the unreasonable increase (of salary). We are only asking for what is just.”

The Makabayan bloc in the House of the Representatives has filed House Bill 7211 for the enactment of P30,000 ($572) entry-level salary of public school teachers and other government employees; P31,000 $295) for instructors and P16,000 as the minimum for employees in the government service.

ACT Teachers’ Party France Castro said, “Amid the opposition to this measure by Duterte, Education Secretary Leonor Briones, Budget Secretary Benjamin Diokno and the rest of the economic managers, teachers are even more adamant in demanding for their immediate pay hike,” said Castro.

The last tranche of the Executive Order (EO) No. 201 signed by then President Benigno Aquino will be given next year. The EO was highly criticized by the government employees for the measly increase for entry-level employees while employees in the higher position like the President has increased immensely.

Teachers are expected to get P551 ($12) next year, the last of the four-tranche salary hike under former President Aquino.

High school teacher Nestor Reyes recalled that Duterte promised salary increase at least three times, but to no avail. He said that to make both ends meet, their only solution, if not to look for part time work, is to loan.

Reyes said the financial literacy being promoted by Department of Education as solution to their problem is not the answer.

Mabella Caboboy, Quezon City Public School Teachers’ Association shared the same sentiment. “Everything has increased except our salaries,” she said in the program. 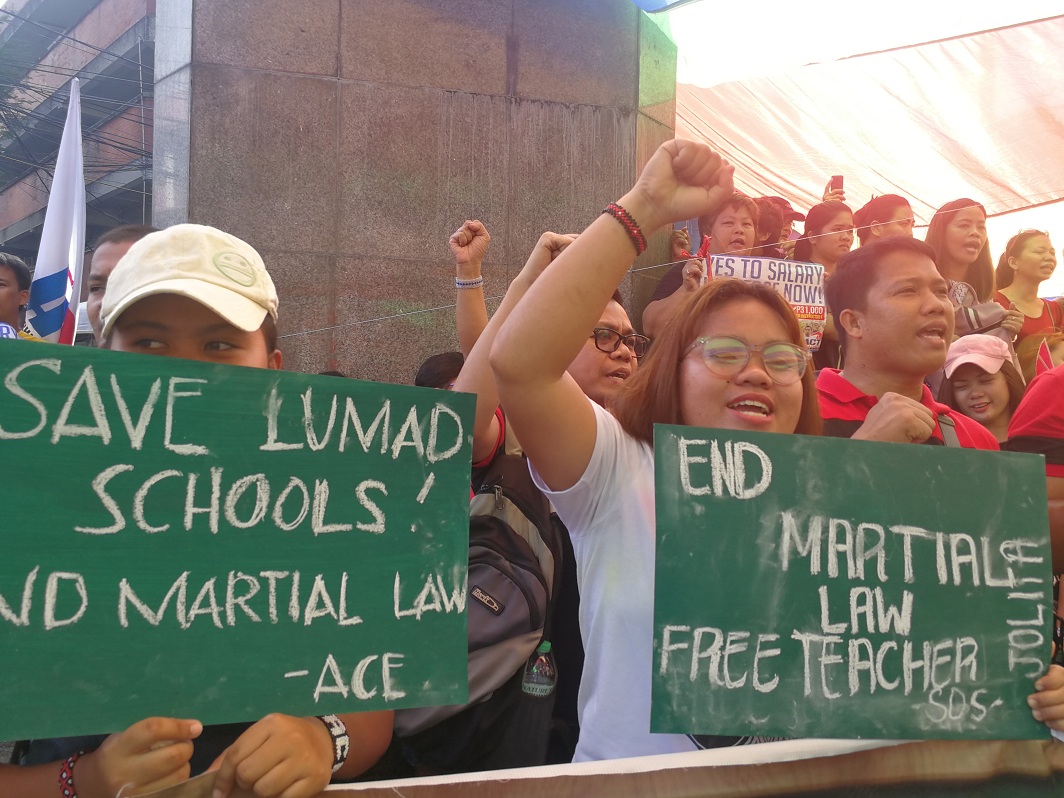 Read: Teachers protest SSL 2015 | ‘Aquino, top officials get millions while we get pennies’

Caboboy said that inflation affected teachers whose take home pay is insufficient to make both ends meet. They also shell out money to provide for the additional teaching materials as the allowances for these are not enough.

In a statement, ACT Teachers’ Party Rep. Antonio Tinio said many of the provisions of the International Labor Organization/United Nations Educational, Scientific and Cultural Organization Recommendation Concerning the Status of Teachers which was crafted in 1966, are still unfulfilled today such as decent salary and providing ancillary staff to perform non-teaching duties.

She pointed out that teachers are not against evaluation as they also see the need for them to improve. She said RPMS and PPST should be used as bases for the trainings or seminars that they need and not as bases for their bonuses.

She said with RPMS and PPST are pressuring teachers to work more than they can just to get the outstanding rating from their supervisor and principal.

“This policy is not for the delivery of quality education but borne out of neoliberal policies that exploits our teachers,” Daz added.

Benjie Valbuena, former president of ACT said they will again hold sit-down strike and mass leave if the government will not take necessary step to increase teachers’ salary.

“No one would fight for our rights but us,” he added.

Martinez meanwhile stressed that it is the duty of the government, enshrined in the international Recommendations on the Status of Teachers and the Magna Carta of Public School Teachers, to address the teachers’ plight.

“We implore him to fulfill the state mandate to provide teachers with decent standards of living and honor our profession by effecting substantial salary increase for education workers,” concluded Martinez.

“Today, teachers remind the Duterte administration that it should be taking concrete steps to advance teachers’ rights and welfare, to address price hikes, among others rather than inventing destabilization plots and raising red scares to silence dissent,” Tinio said in a statement.