“The best way to ensure safety, really, is for government to do its job to protect each and every citizen of the country and stamp out the culture of impunity that has emboldened not only those who wish to silence the independent media but also suppress other basic rights.”

MANILA — Under Duterte’s flagship program of so-called war on drugs, journalism has become an even more dangerous profession. Journalists are not only silenced but also targeted as potential victims in drug bust operations.

The police and other law enforcement institutions have forced journalists to sign as witnesses to the inventory of narcotics seized during anti-drug operations, even if they are not required to do so by law. This was the main motivation of the National Union of Journalists of the Philippines (NUJP) and its member media organizations in launching their signature campaign late last year dubbed as “Sign against the Sign”.

NUJP Chairperson Nonoy Espina said that even when Republic Act 10640 or the amendment to Comprehensive Dangerous Drugs Act of 2002 made it optional for media to witness, more often than not journalists covering anti-drug operations are coerced into doing so on pain of being barred from future coverage or from receiving tips and other information.

Espina said some of their collegaues have found themselves at risk of retaliation from crime syndicates.

Espina said that some media practitioners were made to sign even if they did not actually witness the inventory of seized contraband.

A journalist based in Zamboanga del Norte has been receiving death threats from an accused drug dealer because she testified as witness in the operation. “She didn’t even want her name to be revealed because of fear. This has to stop,” Espina said.

Another journalist from the Visayas who regularly signed on as witness to drug inventories found himself included in a drug watchlist, Espina added.

Worse, the Duterte administration has time and again linked media related-killings to war on drugs.
Espina cited the murder of Albay’s Joey Llana and the failed assassination of Pangasinan journalist Virgilio Maganes.

In Llana’s case, the killers had left a white powdery substance in his vehicle that probers initially said was “shabu.”

In Maganes’ case, the gunman had left a cardboard placard tagging him as a drug dealer before fleeing, thinking he had killed the journalist. 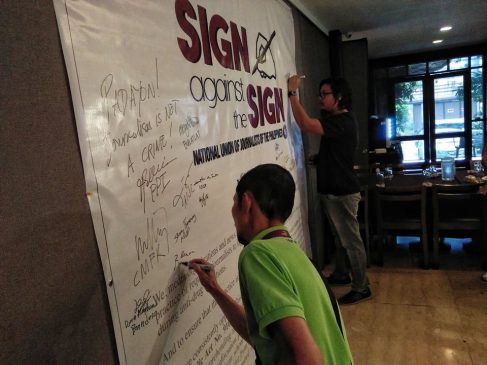 In October last year, policemen also ‘visited’ the offices of SunStar Cebu and SunStar Bacolod purportedly to seek an alliance to write about their accomplishments and not only about bad news related to cops. In Bacolod, policemen took photos of the staff without asking permission.

The NUJP is not taking this sitting down. Collated signatories of the Sign against the Sign campaign are now being gathered from all over the country. The signatures will be submitted by to Congress, in time for the resumption of their session in mid-January.

According to Espina, the signature campaign is just one of the many forms of drumbeating their fight for press freedom. Now more than ever, the deliberate attacks against media practitioners have only strengthened their unity.

“The best way to ensure safety, really, is for government to do its job to protect each and every citizen of the country and stamp out the culture of impunity that has emboldened not only those who wish to silence the independent media but also suppress other basic rights,” Espina ended.