You Are Here: Home → 2019 → March → 11 → From Comval to Manila: Workers face threats amid strike for regularization

From Comval to Manila: Workers face threats amid strike for regularization 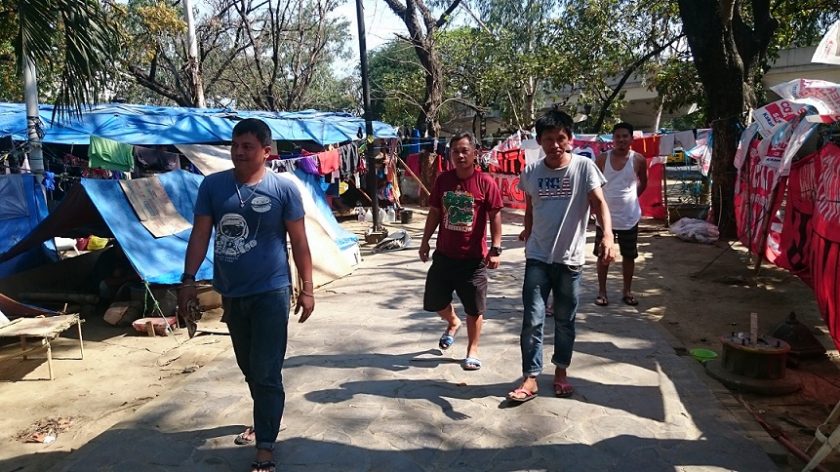 Unionists have defended their protest camp from at least four instances of forced demolition while in Manila.

MANILA – Alona Sotto, a mother of two, celebrates her 38th birthday today (March 11) far from her family and home in Compostela Valley.

She is among the hundreds of unionists whose strike has been met with violence since October 2018. Unable to continue their strike in Mindanao following the military operations against their unarmed picket line, the unionists set up instead their protest camp starting December 2018 in Manila.

At the Liwasang Bonifacio, they have built and protected their picket line against threats of demolition by the local government. “We are here to pressure the Department of Labor and Employment (DOLE) to act swiftly on our regularization and the issues of our strike,” Sotto said in Filipino.

The unionists have been in Manila for roughly four months now. After their picket line in Compostela Valley was burned down and demolished by the military, they pitched their tent at Mendiola Bridge near Malacañang before the Human Rights Day celebration last December 10. They then transferred to the Liwasang Bonifacio and, from time to time, moved in front of the nearby DOLE headquarters. They have defended their protest camp from at least four instances of attempted demolition.

Life at the protest camp is difficult especially for women. “It’s very hot in here, and in the evening we have only the street light nearby to light our way,” Sotto said.

There is no ready source of water. They would go elsewhere to take a bath. They have set up a centralized kitchen but sourcing their food is another “struggle” altogether. They are more exposed to summer’s heat and occasional rains. Back home their family is increasingly worried and asking for their return. Their children are expectedly crying since their parents are far away. Some couples, Sotto said, are having long-distance arguments. Parents obviously worry about their children left behind. Errol Tan, a member of the union’s board of directors, said they are also finding it harder to respond to their kids’ needs for schooling. “We’re all heavily in debt now.”

But they all say they have to pursue this struggle. “In the end, this is also for our family.”

A long, dangerous struggle for regularization on the job

The union is demanding the workers’ regularization in the packing plants of Sumitomo Fruit (Sumifru) Corporation in Compostela Valley.

Since December 2010 after a lengthy legal battle they won their case in the Supreme Court. The latter issued a decision saying the longtime Sumifru workers under the union Nagkahiusang Mamumo sa Suyapa Farm (NAMASUFA) are to be considered as regular workers.

But the Japanese fruit exporter filed a motion asking the Supreme Court to reconsider and reverse its decision. While the high court has not decided yet as of this writing, the union launched various actions to induce Sumifru to abide by the court decision. Most of the more than 3,000 workers of Sumifru remain as contractuals according to the striking workers, despite the still unchanged Supreme Court decision calling for their regularization.

Contractuals in Sumifru do not enjoy security of tenure or any benefits in case they get sick or when the women workers get pregnant, except for what they can get from the Social Security System and Philhealth, the unionists said. Work contract typically lasts three months before it is renewed.

Late last year, the struggle for regularization drove the workers to launch a strike. They had successfully launched strikes before. This time though, they were up against not only the management of Sumifru and their guards but also martial law in Mindanao.

Although they are unarmed and holding a strike is part of the workers’ rights, the military and the local government of Compostela Valley are misrepresenting unionism and strike as “terrorism,” the workers said.

Along with accusing the workers of being members of the New People’s Army, the military conducted house-to-house visits warning the civilian community against the unionists and the strikers.

Union board member Errol Tan told Bulatlat that the military has killed one of their fellow unionists and attempted to kill two others. Adding to their difficulties in Compostela valley, he said, are the military actions such as spreading baseless accusations about the unionists.

“Every union in Compostela Valley is under military threat,” Tan said.

In fact, every union in the Philippines opposing contractualization or allied with the labor center Kilusang Mayo Uno (KMU) seem to be under military threat. On March 11, members of KMU staged a protest action in front of the Department of Labor and Employment (DOLE) headquarters to slam the “NICA Orientation for Government Executives on the Communist Terrorist Group Problem” called by the DOLE for its executives.

KMU denounces what it describes as “relentless vilification campaign” by the AFP and intelligence agencies. “Our member unions are legitimate organizations of workers who are advancing legitimate struggles and grievances. Unionism is not terrorism,” said KMU chairperson Elmer Labog.

A typical example of workers advancing such legitimate struggles are Sotto and Tan of NAMASUFA. Both have worked for nearly two decades in Sumifru yet remained contractual up to the time of their strike in late 2018.

In 2017 their daily wage amounted to only P291 for every eight hours of work. Yet, this amount had already been increased bit by bit through the campaigns of the union.

“No regularization on the job, no benefits” — this is how simple the equation is to Gloria Delantes, 60, a contractual for half her life at first in Dole Philippines and then in Sumifru for 19 years.