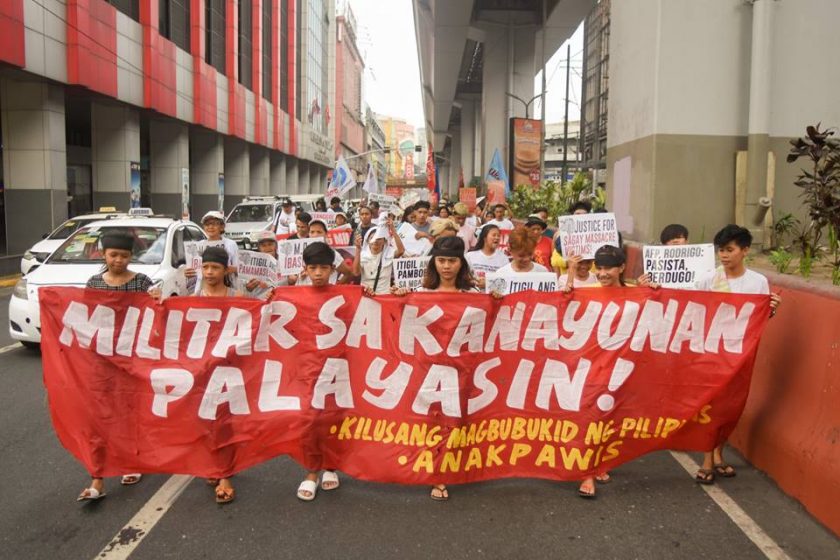 Progressives said these killings were carried out under Memorandum 32, where more military forces were deployed in three provinces, including Negros.

MANILA — A child rights group has called attention to the trauma brought to children resulting from the spate in killings and attacks in Negros island.

“The mere presence of military and police men causes her extreme anxiety and uneasiness,” Frances Bondoc of Children Rehabilitation Center said in a statement.

This week, a total of eight peasants and advocates were killed, excluding the four reported killing spree last night, July 26.

A child was also among those killed on July 25, along with his father Marlon Ocampo in Sta. Catalina, Negros. In the same incident, his wife and another child sustained serious injuries.

The killings, the child rights group said, have “peculiar similarities” ala “tokhang style.”

Progressives said these killings were carried out under Memorandum 32, where more military forces were deployed in three provinces, including Negros. CRC said the memorandum must be repealed.

Children orphaned due to the killings are also suffering from psychological, physical and emotional trauma, such as depression, anxiety, Post Traumatic Stress Disorder (PTSD) and other mental health concerns that affects the social functioning of a child.

For one, 16-year-old Cassie, not her real name, is suffering from sleeping disturbances after police forces barged into their home on March 30 and killed her father at 2:00 a.m.

Her father was among the 14 farmers killed in separate incidents in the wee hours of March 30 as the police carried out an operation dubbed as “Oplan Sauron.”

CRC, an organization aiding children who have been direct and indirect victims of human rights violations in Negros, reported that Cassie has since stopped going to school due to frequent anxiety attacks and emotional breakdown whenever she is reminded of her slain father.

“These communities that are constantly being attacked by state violence, experience terror and fear for their lives. The recent murders in Negros this week produce the same chilling effects to children and families whom they left behind,” Bondoc said.

The child rights group said the Duterte administration should be “held accountable for the spate of violence and series of killings in the island marred with unprecedented impunity.”