A portrait of the security guard as a worker 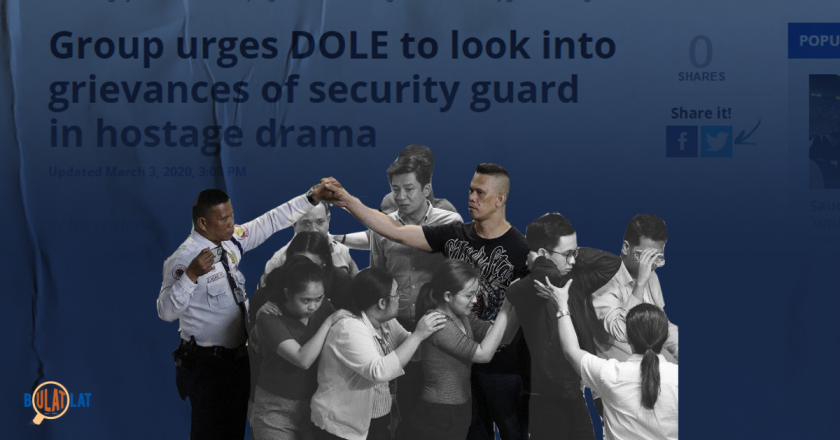 At the end of a tense stand-off, Alchie Paray, 40 years old, told the gathering crowd his grievances before he was subdued and arrested. What began as a hostage situation ended as one man’s crusade against oppressive labor practice and corruption.

We are not here to condone or laud Paray for taking hostages and putting lives at risk. But it’s time for us to take a long, hard look at the circumstances that led Paray to taking action. Paray is a reflection of the workers’ struggle, and of the state of the Filipino people today.

What kind of society do we live in? Workers from Honda Cars to NutriAsia to Pepmaco and more have been forced to take the path of militancy in the face of insulting conditions and low wages. Students are walking out of schools to protest the passage of the Anti-Terrorism Bill, while human rights workers denounce the weaponization of the laws which are meant to protect them.

Philippine society, like all societies, is dominated by class interest. Interest between the business-holding and land-owning class and everybody else. Laws, institutions, culture, traditions, and everything else are influenced and dictated by those who control the economy, often to the detriment of those who participate in it.

Thus capitalism is born – a relationship between the capitalist class and the exploited working class, built on the back of unsustainable competition. Capitalism necessitated laws which legalize the theft of workers’ labor-power under the guise of wage, institutions like the police and courts to enforce this exploitation, and a consumerist culture which normalizes and makes the image of a “hard worker” ideal.

In this light, Alchie Paray takes on a new light. Here is a man, alienated and crushed by the system he lives in, and finding no other recourse, decided to take matters into his own hands. He could almost sound revolutionary, if not sympathetic.

He is not, of course. It would be a disservice to call Paray’s actions revolutionary or militant. But it comes from the same emotional space and draws upon the same feelings of anger. The fact that he refused 1 million pesos and insisted that he be heard says it all; it’s not about the money, it is about rights.

But Paray was a wounded animal lashing out against the world that hurt him. This is the difference between a worker fighting against injustice and one fighting for their class. Alchie Paray is at once every single Filipino caught in the same situation, but at the same time, he is a reminder that we must all organize ourselves against the system that allows this exploitation to manifest.

It is no longer enough to be given a microphone and a few minutes to speak. We are not dealing with individual grievances but against an entire system built on exploitation. Instead of individuals lashing out against the world, we must collectively strike at the beast at the heart of it.

More than a criminal situation or a labor dispute, Paray’s case was an attack by capitalist society against a worker. It is a reflection of the struggle between a capitalist class seeking to extort profit and a working class willing to fight back. And until we resolve the roots of this conflict – through laws, or through revolution, if necessary, then we will inevitably see more Alchie Parays pushing back at the system that created him.

Because ultimately, Alchie Paray is all of us; people pushed to the wall, who will eventually have to push back.