“Who will provide quality healthcare to our patients if our healthcare providers become patients too. The government must immediately distribute PPE to ensure and protect health workers, hire and train more additional permanent health workers, and increase the public hospital budget.”

MANILA – Health workers reiterated their call for mass testing as the Philippines ranked first in the world with highest percentage of health care professionals (HCP) fatalities in relation to the total number of COVID-19 deaths.

As of April 23, twenty-five HCPs have died of the dreaded disease, which accounts for 5.72 percent of the total COVID-19 deaths in the country, according to John Hopkins University and Medscape data.

The Coalition for People’s Right to Health said the mounting cases reveal the risks faced by health workers in the Philippines with the health department recently revealing that at least 1,062 tested positive out of the more than 6,710 cases. This accounts for 16 percent of the total positive cases in the Philippines.

The spike in the number of health workers who have afflicted the deadly virus has made the World Health Organization “worrisome,” describing the Philippines as an “outlier.”

Critics have long pointed out that the lack of personal protective equipment for health workers put them at risk of afflicting the deadly virus, now with more than 2.5 million positive cases and more than 177,000 death toll globally. The shortage for protective equipment is not only true for the Philippines – but also in many parts of the world, including the US where 9,200 have tested positive last week.

Among the recent spike in the increased positive cases are the health workers of the Research Institute of Tropical Medicine – at least 40 of them, according to their top official. 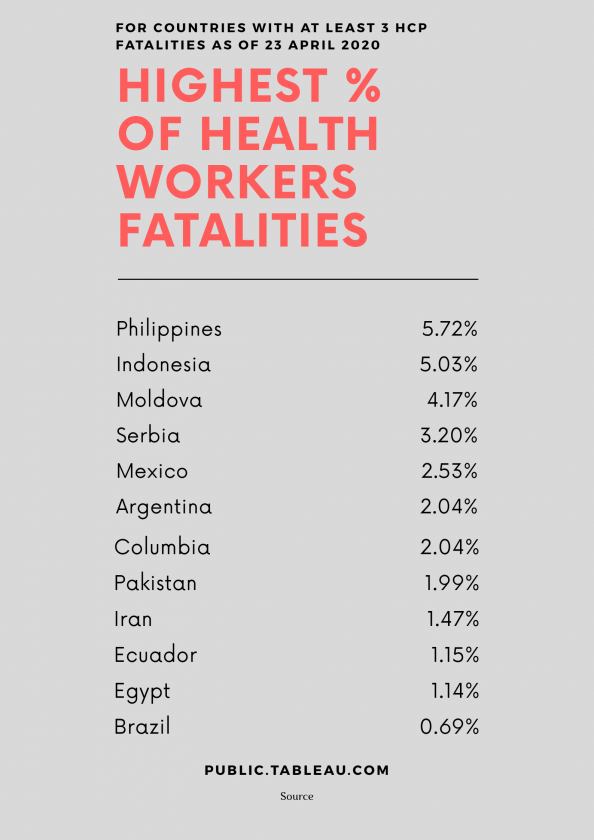 As such, groups such as the CPRH are calling for regular testing for health workers amid the unreliability of documenting their exposure to the virus due to high patient load.

The Department of Health said more than 16,000 have been tested for COVID-19.

“Expressing gratitude to frontliners and honoring their sacrifices does not end with flowery statements, but ought to translate to purposeful and enduring actions. Labeling the fallen as heroes does not address the reason for their unfortunate demise,” the CPRH said, adding that the DOH is “ultimately accountable not just to patients, but its health workers that ensure and comprise its mandate.”

No protection, no transparency

Health groups said there remains a dearth in available protective equipment available to Filipino health workers as COVID-19 cases in the Philippines have been steadily rising, according to the Center for Strategic and International Studies.

Robert Mendoza of the Alliance of Health Workers said their vulnerability is aggravated due to long hours of work, of about 12 hours a day for seven to eight days in a month.

“Who will provide quality healthcare to our patients if our healthcare providers become patients too. The government must immediately distribute PPE to ensure and protect health workers, hire and train more additional permanent health workers, and increase the public hospital budget,” he said.

Mendoza added that they have received reports that health workers at the Jose Fabella Memorial Hospitals are still expected to report for work if they do not show severe symptoms, adding that they, too, work without proper and complete personal protective equipment.

Suspected patients, on the other hand, are not sent to quarantine areas and are instead “mixed” with non-COVID-19 patients, Mendoza said.

“Our union members are afraid of losing their lives. They have families who depend on them. They are worried what will happen to them just because of the hospital management’s indifference and lack of concern to their safety,” said Mendoza.

Health advocates said there also remains no transparency as far as the current situation of frontliners is concerned.

In the case of the National Center for Mental Health, at least 62 out of the confirmed 75 cases are health workers. Mendoza said union members at the facility have requested for a systematic testing among employees and implement a necessary containment.

However, Mendoza said NCMH workers did not get any response, resulting in what he described as “rapid increase” of patients and employees who have contracted the virus. This, he said, is worrying given that the facility is both dense and without proper ventilation.

But instead of looking into their concerns, its top official Clarita Avila, who exposed the conditions at the NCMH, was “re-assigned” to another facility in Las Piñas with “no reason whatsoever.”

As it stands, the DOH said health workers are among the priorities for the expanded testing.

AHW said the health department must immediately carry out the mass testing among hospital workers in both public and private hospitals to “help contain the spread of the virus.”

The group added that proper orientation and protective gear should also be provided to barangay health workers, who join nurses in their house-to-house contact tracing.

The group added that, the “fight against coronavirus will never succeed if government does not allow full participation of the people in the whole process of planning, decision making and implementation of laws, policies and programs of government at all levels.”