MANILA — Resist attempts to downplay, or worse, to forget the atrocities of Martial Law.

This was the message of novelist Lualhati Baustista in her keynote address at the Balik Ka/Saysay/an online conference on historical revisionism hosted by the Asian Center of Journalism at the Ateneo de Manila University and the Consortium on Democracy and Disinformation.

The Dekada ’70 and Gapo author is no stranger to Martial Law. She went underground, and when she decided to return to the city, continued to produce works that reflect the situation and the anxieties and fears of ordinary Filipinos at the time despite the strict censorship imposed by the government. 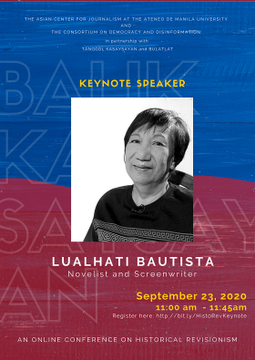 “If what happened during martial law did not happen, then why did the victims win their case in Hawaii?” she said in a recorded message, saying that the primary goal of the Marcoses since they returned in the country was to make people forget about the atrocities of the Marcos dictatorship and eventually allow them to return to power.

She said that she has friends who are victims of martial law – killed, tortured, abused, and raped.

“This (historical revisionism) did not start with Marcos’s burial at the Libingan ng mga Bayani,” she said, adding that it just so happened that the Marcoses found an ally in Duterte, whose campaign they funded in 2016. “This is now the payment for that,” she said in Filipino.

“They are slowly changing history,” she said.

“Is Marcos a hero for the workers?” Bautista asked. She explained that it was during Martial Law that countless labor violations were committed for the sake of attracting foreign capital.

She pointed out that contractualization became rampant, and instead of enabling companies to regularize their workers after the six-months provisionary period, Marcos allowed profit-oriented foreign capitalists to circumvent it. Unions were disbanded and eventually banned.

“Marcos bragged about the low salaries of workers to capitalists,” she said. “Companies were no longer hiring workers directly but went through agencies.”

She also made mention of the murder of Macli’ing Dulag who was assassinated by state forces for opposing the Chico Dam Project which would flood their villages.

“Is Marcos a hero for the farmers?” she asked, elaborating how the Masagana 99 program which did not benefit the farmers but multinational agricultural companies.

“They are not only changing our history but they are repeating what happened then,” she said.

“While martial law was openly declared, now, this is hidden in the guise of the anti-terror law; while they first imprison people, now they kill outright,” she said.

“Let us study all these and all the other atrocities committed during martial law,” she said.

Vanessa Mablay, a nursing student of Benguet State University, said that the problem that the new generation is facing is in discerning the truth, because as much as they would want to believe those who speak against martial law, they also see and feel the so-called progress peddled by revisionists, prompting them to actually believe them as well.

“Before martial law students don’t just study in their classrooms, there are group discussions and it is in these discussions that the truth is discovered,” Bautista said.

“The young people knew more at the time, but now our history is stuck with the Katipunan, and they have actually removed the subject, Panitikan,” she added.

“The atrocities at the time of Marcos should be included in the curriculum,” said Danny dela Fuente of SELDA, pointing out that this is already in the law, referring to the Human Rights Victims Reparation and Recognition Act of 2013, which sought to keep the memory of the atrocities of the Marcos regime.

“Don’t forget those who disappeared, whose mother died searching for his son, those who were tortured, those who were killed, the friends who were raped. Let us not allow anyone to erase them from our history,” Bautista concluded.

Bulatlat is a media partner of Balik/Ka/Saysay/An.