You Are Here: Home → 2020 → October → 16 → Why rights groups shun government-led ‘independent probe on rights abuses’ in the Philippines 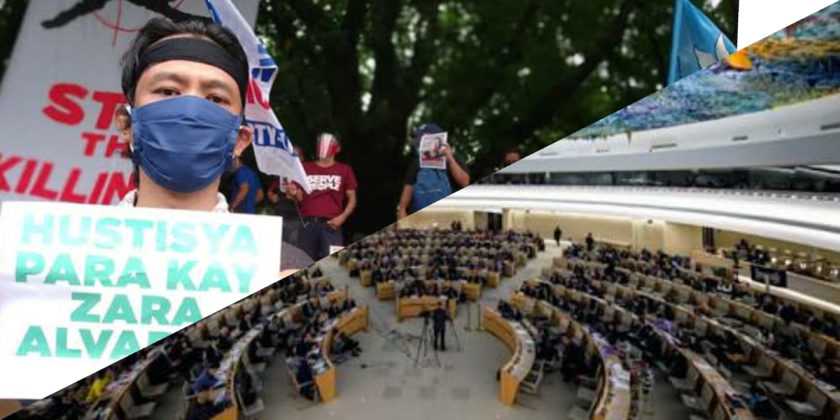 MANILA – Time and again, human rights organizations have called for independent investigation of mounting cases of extrajudicial killings, enforced disappearances, arrests and filing of trumped-up cases, to name a few.

Recognizing the limitations of domestic remedies, the Ecumenical Voice for Human Rights and Peace (EcuVoice) has exhausted international mechanisms in pursuit of justice.

Last week, the UN Human Rights Council adopted the tabled resolution on the Philippines during the 45th regular session, acknowledging the grave human rights situation but sparing the Duterte administration from an international investigation. Instead, the UNHRC pushed for technical cooperation and capacity-building for the protection of human rights.

Is independent probe on human rights violations even possible, when violators and those who will be carrying out the investigation are practically on the same side of the fence?

Human rights advocates are not hopeful, and they have reasons of being so.

In recent months, families of victims of extrajudicial killings and enforced disappearances have been in the dark on leads on the perpetrators.

Lean Porquia, son of murdered activist and development worker Jory Porquia, said in a press briefing last week that not only are they not informed of who is behind the gruesome killing, they are horrified to know that vilification campaign and more human rights violations continued, referring to the killing of peace advocate Randall Echanis and church worker Zara Alvarez.

Bacolod-based human rights worker Clarizza Singson said they are now prodding the regional office of the Commission on Human Rights to conduct an investigation on Alvarez’s killing. Two months since her murder, no perpetrator has ever been identified.

The same goes for the murder of Echanis. More than two month after the brutal killing, police have not provided any lead.

No state-led investigation, too, has ever been launched to look into the widespread red-tagging and vilification campaign against activists, traditional opposition, and even the media, which both international and local human rights groups have long noted to have led to graver rights abuses, including enforced disappearances and killings.

Last month, social media giant Facebook took down several Pages for its coordinated inauthentic behavior. These Pages, which Facebook said are linked to Philippine state forces, are usually at the fore of red-tagging and vilifying progressive organizations. Even Bulatlat and many other alternative media organizations were not spared from the red-tagging spree. Instead of pursuing an investigation, the Philippine government first denied ownership of these Pages but later decried its taking down as a violation of their free expression.

State forces carrying out arrests have also been hardly investigated, despite victims crying out for being victims of planting of evidence. Human rights groups in the Philippines have long observed that planting of evidence has become a seemingly normal routine, with nearly all charged with illegal possession of firearms and/or explosives – adding that latter would make it a non-bailable offense.

In cases of drug-related killings, UN Commissioner for Human Rights Michelle Bachelet herself observed a “pattern” of police officers planting evidence in its anti-drug operations. In 25 police operations where 45 were reportedly killed, a UN report revealed to have found the guns bearing the same serial numbers have re-appeared in the possession of different victims in different locations at least two times.

Attempts to weed out truth from fabricated narratives takes years under the Philippine justice system. The plight of political prisoners, where 383 out of the 619 were arrested under the Duterte administration as of April 2020, is worsened with the tedious, cumbersome, and frustrating justice system.

The same frustrating system is afforded to families of victims of human rights violations seeking justice.

The International Commission of Jurists, a Geneva-based organization of human rights lawyers, highlighted in their 2015 Enforced Disappearance and Extrajudicial Execution: Investigation and Sanction – A Practitioners Guide that it is the state’s obligation to investigate grave human rights violations such as enforced disappearances and extrajudicial killings. This is enshrined in the International Covenant on Civil and Political Rights, which the Philippines signed in 1966 and ratified in 1986.

This, too, is enshrined in other human rights-related UN mechanisms and instruments that no state can ever waive and must be carried out “using all available legal means and it must be aimed at discovering the truth and at the pursuit, capture, prosecution and eventual punishment of all the masterminds and perpetrators of the facts, especially when State agents are or could be involved.”

Truth commissions and similar tribunals, in fact, will never complete or substitute the government’s obligation to establish the truth behind a disappearance or a killing through criminal and court proceedings – no matter the weight of the historical truth it will forever hold. State-led investigations, the ICJ, must be carried out with due diligence and without delay, and be thorough, effective, impartial and independent.

Citing the Inter-American Court of Human Rights, the ICJ said that for an investigation to be considered as impartial and independent, it must be conducted in line with the “rules of due process of law, which implies that the bodies of administration of justice must be organized in a manner so that its independence and impartiality is guaranteed and the prosecution of grave human rights violations is made before regular courts in order to avoid impunity and search for the truth.”

The investigating body, the ICJ furthered, should not be among the suspected perpetrators nor have subordination or hierarchical ties to them as it may compromise the investigation. Those who will dare to hamper the development or influence its course, should be removed from both direct and indirect positions and functions over the investigation.

Safety and protection of victims and their families should also be considered in carrying out investigations as they may be subjected to violence, threats, and even reprisals. They, too, have the right to have the facts, per the ICJ, as the “right to an investigation is closely related to the right to truth.”

Meanwhile, in the revised 2016 Minnesota Protocol on the Investigation of Potentially Unlawful Death said that depending on circumstances, states have “duty to cooperate internationally in investigations of potentially unlawful death.” This protocol also requires that investigation be prompt, effective and thorough, independent and impartial, and transparent.

Investigation must, at a minimum, take all reasonable steps to:

a. Identify the victim/s
b. Recover and preserve all material probative of the cause of death, the identity of the perpetrator/s and the circumstances surrounding the death
c. Identify possible witnesses and obtain their evidence in relation and the circumstances surrounding the death
d. Determine the cause, manner, place and time of death, the investigation should distinguish between natural death, accidental death, suicide and homicide,
e. Determine who was involved in the death and their individual responsibility for the death

Source: 2016 Minnesota Protocol on the Investigation of Potentially Unlawful Death

The Minnesota Protocol also states that all those involved in investigating unlawful death “must meet the highest professional and ethical standards at all times.” It added that as an overarching strategy, investigation must be methodical and transparent, and all legitimate lines of inquiry into the killing must be pursued.

No proper investigations, then and now

In the Philippines, mere police investigation on a human rights violation that can possibly lead to a strong case filed before a proper court is hardly done.

For both political and ordinary cases, Ephraim Cortez, secretary general of the National Union of Peoples’ Lawyers (NUPL) said the police lacks competence in investigative skills and usually rely on the old means, which is to extract confession. Another impediment in police investigation is their attempts at whitewashing.

“There is no intention to conduct a thorough investigation of (politically-motivated) cases. This is one element of impunity,” said Cortez, adding that state forces themselves do not want to be identified as perpetrators and be prosecuted in the end.

Cortez said that despite recent moves of the court system to implement reforms and measures, it remains very slow in delivering justice. Apart from internal causes like absences among judges and prosecutors and clogged dockets, it takes a long time to get evidence and testimonies from state forces.
In the Benjamin Bayles killing in 2010, for instance, it took almost two years for the military provost marshal to submit a certification that the accused are soldiers.

The same goes for the case of the killing of Dutch lay missionary Willem Geertman, where the police medico legal officer took almost two years before taking the witness stand, only to say that all documents related to the case have been lost.

In the case of security guard Rolly Panesa, who was arrested and tortured in 2012, he endured 11 months in prison before the Court of Appeals ordered for his release. Arresting officers from the joint elements of both the Philippine military and police then claimed that he was a certain Benjamin Mendoza, a alleged ranking officer of the Communist Party of the Philippines in Southern Luzon.

In 2010, the police arrested two assailants for the killing of Bayles, only to find out later that they were soldiers belonging to the 65th Infantry Battalion of the Philippine Army. Bacolod-based human rights advocates told Bulatlat that a decade has passed, the court proceeding is still ongoing.

All these cases – committed before and during the present administration – are just among the mounting human rights violations that need proper investigation.

Cortez said that even the so-called superbody investigating politically-motivated killings under the Administrative Order No. 35 has not delivered justice for victims of abuses.

In the absence of proper and independent investigations in the Philippines for now, human rights organizations and families of victims of rights abuses have worked tirelessly to hold fact-finding mission, pursue cases despite the tedious justice system, and hold to account those behind the killings – including a guilty verdict against President Duterte and US President Donald Trump for violating political and economic rights of the Filipino people two years ago.

Karapatan Secretary General Cristina Palabay told Bulatlat that the Commission on Human Rights, under its then chairperson now senator Leila de Lima has “performed well even with its limited mandate and capacity and it has conducted thorough and timely investigations and actions.”

Among these included the enforced disappearances of university students Karen Empeño and Sherlyn Cadapan, the cases of the Manalo brothers, the arrest and torture of Melissa Roxas, among others.

Other mechanisms within the United Nations can still be pursued, said EcuVoice. Measures such as the filing of a resolution before the European Commission to temporarily withdraw trade perks of the Philippines and the proposal of US legislators to stop the ongoing military and police support also continue to gain ground.

EcuVoice is hoping that like the local and international campaign against the extrajudicial killings during the then Gloria Macapagal-Arroyo administration, the current pursuit of justice will abate the brutality of the Duterte administration’s vicious counterinsurgency campaign.