You Are Here: Home → 2011 → June → 18 → Whitewash feared in extrajudicial killing where soldiers were clearly involved

Whitewash feared in extrajudicial killing where soldiers were clearly involved

MANILA – Whenever a case of an extrajudicial killing is being blamed on soldiers, the Armed Forces of the Philippines (AFP) is quick to deny that its members are involved. But in this case, two of its soldiers were caught by policemen, who did not know that the persons they arrested were soldiers, near the scene of the killing. Still, colleagues and supporters of the victim Benjamin Bayles now fear of a possible whitewash.

The local police arrested the gunmen who were later identified as Roger M. Bajon and Reygine Laus, elements of the 61st Infantry Battalion of the Philippine Army. During the budget deliberations in Congress last year, Defense Secretary Voltaire Gazmin admitted that the two suspects arrested for the extrajudicial killing of Bayles are indeed members of the AFP.

Murder charges were filed against the two soldiers before the Regional Trial Court in Himamaylan. 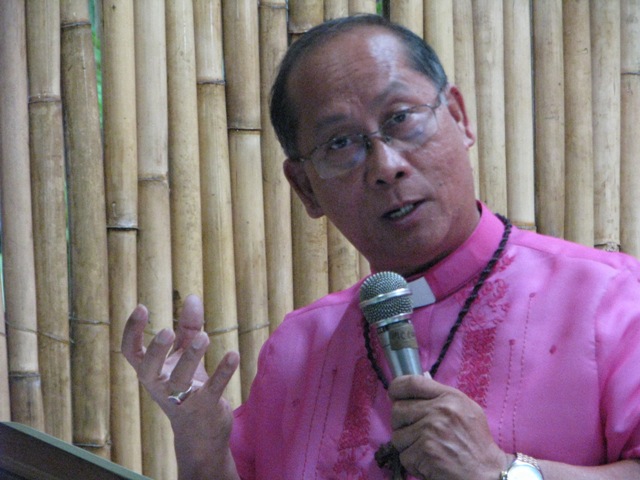 Since then, however, there have been signs of collusion between the military and the police: witnesses are being harassed and journalists implicating the military in the killing have been receiving death threats, according to Benjamin Ramos Jr., counsel of the Bayles family.

Alarmed over these developments, the Iglesia Filipina Independiente (IFI) formed the National Task Force Bayles exactly one year after his death. Bayles was an active member of the IFI.

“The Bayles case has national impact. This is the evidence to what former UN Special Rapporteur Philip Alston, Karapatan and human rights lawyers have been saying all along: that the extrajudicial killings are committed by the military. This is a symbol of our battle against impunity,” Bayan Muna Rep. Neri Javier Colmenares said.

“We, in particular, commit ourselves to vigorously work for the judicial conviction of those behind the killing of Brother Benjamin Bayles as it will significantly contribute toward changes in the security policy of the AFP, end the culture of impunity in human rights violations and further encourage participation in the Filipino struggle for justice and peace in our land”, Bishop Joselito Cruz, chairperson of the task force, said.

In an update written by Ramos, the Himamaylan police and the City Prosecutor’s Office informed the lawyers of the victim’s family that the paraffin tests and the ballistic examination on the two suspects yielded negative results.

Ramos said that slugs and firearms taken from the suspects during the arrest were turned over to the police who conducted the ballistic examination. “There is no way of ensuring that the firearms were not changed prior to examination, or that the result would be manipulated,” he said. Until now, Ramos said, they have yet to receive official copies of the tests.

Ramos said a reliable source told them that the military talked with the local police. 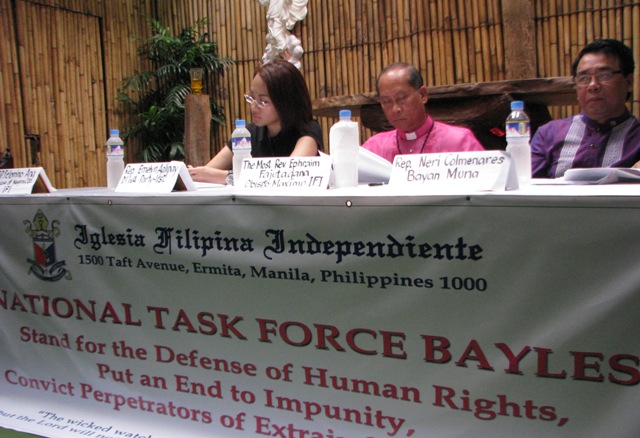 In his speech, Colmenares recalled that during the budget deliberations last year when he took up the Bayles case with top AFP officials, the military generals said they would not tolerate the killing. “Now, they say, it is up to the local court, invoking sub judice. Sub judice is not the real reason, there is an effort to ensure that justice will not be meted out [in this case],” he said.

On the same day, members of the National Task Force Bayles led by IFI Supreme Bishop Ephraim Fajutagana went to Justice Secretary Leila de Lima and asked for her assistance. The group asked De Lima to look into the following concerns: (1) lack of written report on the result of the ballistic tests and forensic examinations, (2) delay in rendering justice, and (3) allegations of military pressure on the police, fiscal and judge involved in the case.

Colmenares and Rep. Emelyn Aglipay of Diwa Party List already filed separate resolutions before the Congress Committee on Human Rights to investigate the killing of Bayles.

“The issue of culture of impunity is not an issue for the dead but for all of us. Who knows who would be the next victim from IFI? I hope it would not be me,” Supreme Bishop Ephraim Fajutagana told the gathering of IFI members and supporters from other churches.

Former IFI Supreme Bishop Alberto Ramento was stabbed dead inside the rectory of IFI Church in Tarlac City. While the police claimed it was a robbery case, Ramento’s family and colleagues deemed the killing as politically-motivated.

The National Task Force Bayles vowed to undertake lobbying efforts here and abroad to seek support in the promotion of justice and human rights in the Philippines.