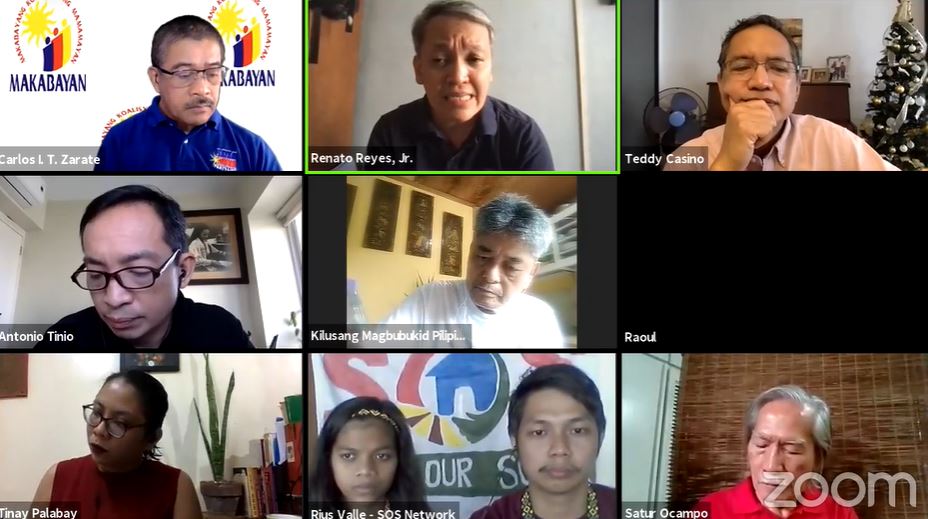 MANILA – For the Makabayan bloc and other progressive organizations, the recently concluded Senate hearing on red-tagging will be used by state security forces as a justification to declare them as terrorists under the Anti-Terror Law.

Former Bayan Muna Party-list Rep. Neri Colmenares in an online press conference on Wednesday, Nov. 2, said that in all three hearings held by the Senate Committee on National Defense and Security, Peace, Unification and Reconciliation, witnesses failed to present credible, competent and admissible evidence to prove that they are indeed recruiting for the Communist Party of the Philippines and the New People’s Army.

Colmenares also said that behind the red-tagging of the progressive party-lists is the government’s electoral agenda to cripple the opposition in the coming 2022 national elections.

“If there is no evidence that can be presented against us, what is this (red-tagging) for? Clearly it is for their electoral agenda and nothing else,” Colmenares said.

He said that as party-list groups who have members across the nation, they would campaign for the opposition. Thus, the administration would utilize its resources to remain in power by fielding administration candidates, Colmenares said.

He added that the government’s electoral agenda was also revealed in National Security Adviser and National task Force to End Local Communist Armed Conflict (NTF-ELCAC) Hermogenes Esperon, Jr.’s statement that they are pursuing for the disqualification of the Makabayan bloc before the Commission on Elections.

He said the progressive party-list groups cannot be disqualified on the basis of their political belief as this is guaranteed by the Constitution. Colmenares pertains to their stand not to condemn the NPA because as revolutionaries, they are also fighting for the legitimate calls of the people such as landlessness, poverty and injustice.

“Your exercise of your constitutional rights are not grounds for disqualification or criminalizing you and putting you to prison,” Colmenares said.

The progressive groups reiterated that the government and the National Democratic Front of the Philippines, the political wing of the CPP should resume a peace process to address the five decades of armed conflict in the country.

Former ACT Teachers Party-list Rep. Antinio Tinio said that it was exposed through the senate hearing that the NTF-ELCAC’s approach to end the armed conflict is militaristic rather than a peaceful process by addressing its root cause.

“For example, National Intelligence Coordinating Agency Director General Alex Monteagudo showed during the hearing that any talk of poverty for them is tantamount to terrorism. They do not want to talk about the root cause of armed conflict,” Tinio said, adding that Gen. Antonio Parlade even described the peace process as non-sense.

But Tinio said it is in fact under the Duterte government that the peace process has reached significant progress. Formal talks were held and both panels have agreed on free land distribution and coordinated ceasefires.

Cristina Palabay, secretary general of human rights group Karapatan, said that the victims of human rights violations and their families were getting frustrated because the hearings did not address the dangers of red-tagging.

She said that the victims and their families somehow expected that the hearing would make way for a deeper investigation of red-tagging as a policy under the government’s counterinsurgency program.

“We are strongly calling on the senate committee to focus on the matter because this is not a joke. Many people were killed due to red-tagging,” Palabay said, adding that red-tagging intensified after the enactment of ATL.

Palabay expressed their support to the calls of criminalizing red-tagging by passing the proposed Human Rights Defenders Bill pending in Congress.

She decried the red-tagging of all groups, individuals, international organizations and even experts from the United Nations.

“Red-tagging needs to stop,” Palabay said. She reminded the government to adhere to the Comprehensive Agreement on Respect for Human Rights and International Humanitarian Law which they have signed together with the NDFP.

“There is an existing agreement here and the state forces are violating this,” she said.

“In two years of existence of the NTF-ELCAC, we have not seen anything that this body has done to improve people’s lives and human rights. They did nothing but to red tag and incite violence. This is why we also support the Makabayan bloc’s call to defund and abolish the NTF-ELCAC,” Palabay said.

The NTF-ELCAC was established after Duterte signed Executive Order No. 70 in December 2018.

The groups said that they will pursue charges against officials who are spreading misinformation, manipulation of images and red-tagging against them and their members.