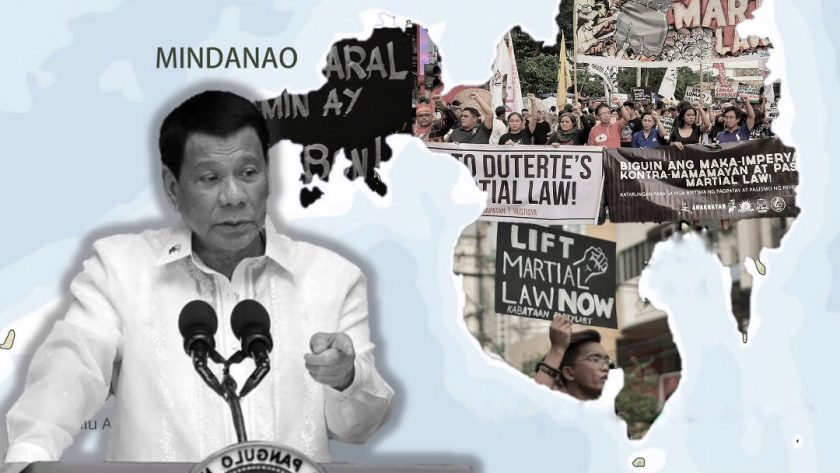 MANILA – President Rodrigo Duterte promised to give the “barest minimum” of peace in Mindanao, adding that if he would fail, he said he would resign.

Instead, talks of a Duterte-Duterte tandem for the upcoming 2022 elections, this time with her daughter Davao Mayor Sara Duterte, has been carrying the same tune of Mindanao representation and iron fist brand of leadership.

Today, President Duterte is set to deliver his last State of the Nation Address. Below are his real ‘legacies’ that the people of Mindanao will never forget.

The Duterte administration used the pandemic to cover up major economic and public health care problems, which, Ibon Foundation, said would have continued to worsen nonetheless even if the dreaded virus never reached the country’s shore.

For one, the Bangsamoro Autonomous Region in Muslim Mindanao (BARMM) has been grappling with the dreaded virus. The Bangsamoro Region’s Response and Recovery Plan for COVID-19 2020-2022 showed that most residents continue to have difficulties in accessing health care services, especially hospitals and medicines.

Data from the Philippine Statistics Authority showed regions in Mindanao saw no significant increase on its health spending from 2016 to 2019. BARMM, for one, is among the countries with the lowest number of public doctors deployed in the country.

With the more transmissible variant of COVID-19, regions in both Visayas and Mindanao are seeing “faster increase” in their cases. Last month, the Davao region accounted for a third of total COVID-19 cases in Mindanao.

The pandemic response, too, was not without irregularities.

In May 2021, the Commission on Audit (COA) flagged Davao City’s $13.4 million spendings for its COVID-19 response, detecting numerous violations of audit and documentary rules including a $157,400 employment project that contained questionable beneficiaries.

Even before the pandemic, the government’s own data revealed how communities in Mindanao were deep in poverty.

In 2019, the National Anti-Poverty Commission (NAPC) reported that BARMM has the highest poverty incidence at 53 percent, with nearly half or 48.6 percent having no access to potable water. 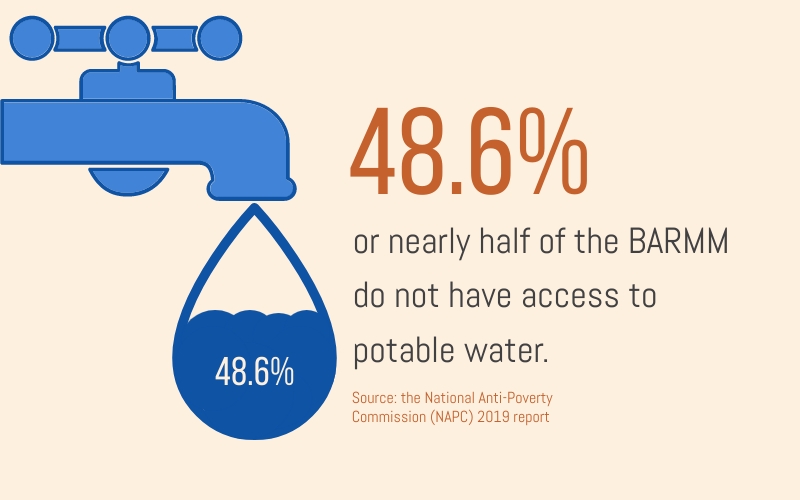 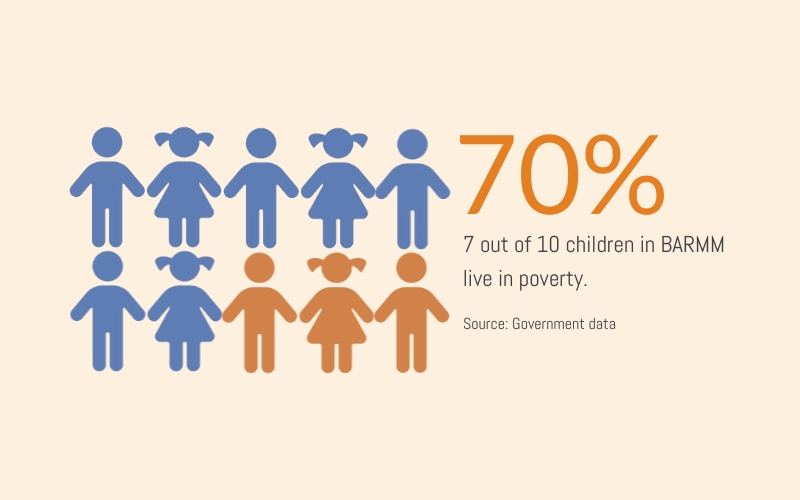 Child poverty is also highest in BARMM. Government data showed that seven out of 10 children in BARMM live in poverty.

This year, BARMM has an approved P75.6 billion ($1.5 billion) budget to supposedly cushion the impacts of COVID-19 to their economy and deliver basic services to their communities. This after the unemployment rate in the region was recorded at 21.50 percent in 2020 and an economic decline of 1.9 percent, the lowest among all regions.

“If we’re not creating enough jobs for the poorest Filipinos, and not raising the incomes from the jobs they have, we are actually covering up for a worsening, distorted economy, without getting the development outcomes that we want”, Sonny Africa of Ibon Foundation said.

Even with the “Build Build Build,” the government’s cornerstone program that focuses on big infrastructure spending to boost the economy, job generation has been slow under the Duterte administration.

Finance Secretary Carlos Dominguez said during the 29th Mindanao Business Conference in 2020 that they were able to secure huge allocation for infrastructure and peace-building projects in Mindanao, amounting to $13.3 billion for the Department of Public Works and Highways for 2021 alone.

But urban poor group Kadamay-Southern Mindanao Region said these infrastructure projects, particularly in Duterte’s hometown Davao City, worsened their lives as it resulted in the demolition of homes.

In 2018, a Maranao community in Salmonan, Davao City was placed under lockdown as the area, where residents have lived since the 1950s, is being claimed by a local businessman. Kadamay SMR said the construction of the $518 million Davao City Coastal Road that is expected to ease traffic congestion in the city’s downtown area may also provide the license to demolish communities near the coastal road and affect the livelihoods of fisherfolk.

4. Martial law and the rehabilitation of Marawi?

Human rights group Karapatan said President Duterte’s martial law in Mindanao “did not bring about safety, but rather atrocities, corruption and abuses among the ranks of security forces, and a prevailing climate of impunity.”

In 2019, reports showed that $24,000 worth of firearms and ammunition used by armed groups Maute and the Abu Sayyaf were traced to the Philippine military, with their recovered weapons marked with “AFP”, “Government Property”, and “Philippine Army.”

Meanwhile, the five-month continuing airstrikes and ground operations in Marawi led to the destruction of more than 5,000 religious sites and the forced evacuation of more than 120,000 individuals per the United Nations High Commissioner for Refugees as of September 2020.

The Regional Human Rights Commission in the Bangsamoro region has also recorded about 14,000 cases of human rights violations during the time that martial law was imposed in Mindanao.

The fact that Meranaws still live in temporary shelters today debunks the government narrative that Marawi is now “fully rehabilitated.”

5. Mindanao as the main recipient of state terrorism budget

President Duterte’s promise of providing the “barest minimum” of peace in Mindanao is still far off now that he is in his last months in office with the government’s counterinsurgency arm pouring $247 million out of the $326.7 million or 75 percent of their funds in Mindanao.

In particular, there were 215 villages in the Davao region that received P20 million ($398 million) each under the Barangay Development Program of the National Task Force to End Local Communist Insurgency.

Per Karapatan’s documentation as of March 2021, 174 out of 394 (43 percent) extrajudicial killings and 12 of the 18 (66 percent) enforced disappearances under the Duterte administration were in Mindanao. 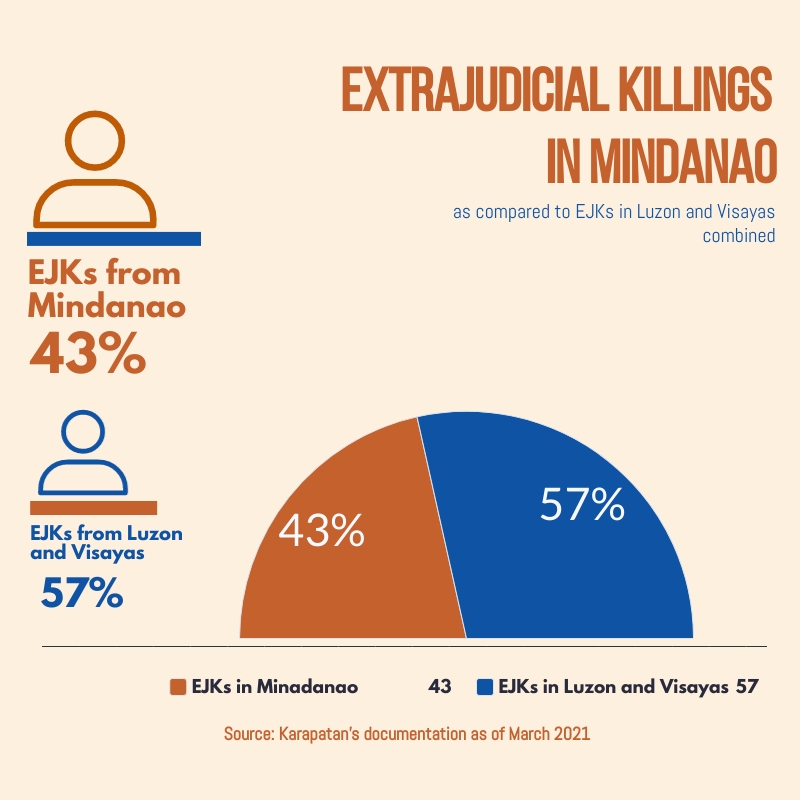 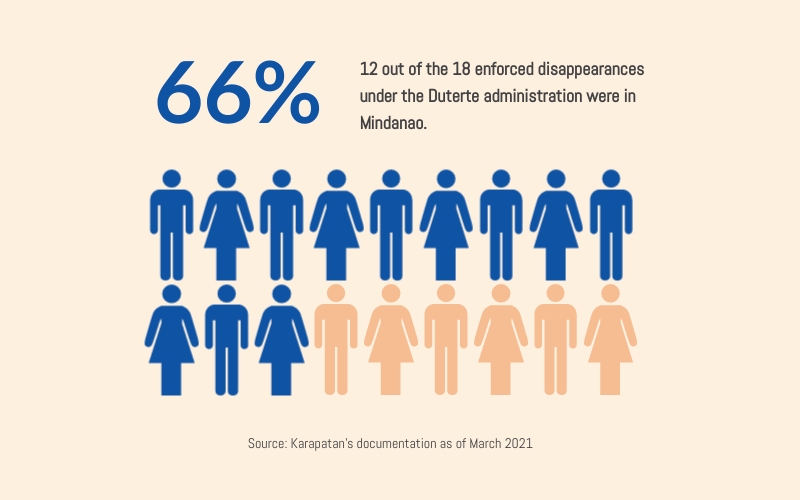 Meanwhile, Bayan Muna Rep. Ferdinand Gaite has earlier questioned lion’s share for Davao City, expressing serious concerns that it may be utilized for the Duterte bloc’s oiling of their electoral campaign in the 2022 elections.

The plight of the Lumad also continued under the Duterte administration – both in their struggle for their right to ancestral domains and right to education.

With the next presidential elections less than a year away, progressives said the possible daughter-father Duterte tandem is the tyrant’s trump card in this game of political power.

Davao Mayor Sara Duterte is reportedly in talks with various political groups about her plan to for higher office. She also recently led a presidential survey.

“If the current administration, by its political practice, has been the most violent and most aggressive administration in the post-Marcos era, I think it’s not far to imagine that the survey is stumbling a bit in terms of getting honest results”, Africa said.

He added, “if the Dutertes win in the 2022 elections, it goes to show how deep our democratic crisis is. If we have leaders who, in their political practice, are not really caring for the people and are actually biased for the super few, that’s a big problem and it shows how much we have declined in the past years.” (JJE, RVO)