You Are Here: Home → 2021 → August → 25 → SC asked to revisit cases of political prisoners arrested due to ‘warrant factories’ 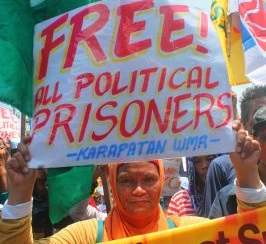 “As part of its disciplinary and administrative power over courts, the Supreme Court should take judicial notice and do something about the habitual denigration of codes and canons of conduct and ethical standards required of those who administer and dispense justice, resulting in grave abuse of discretion and violations of civil rights of the accused,” Fides Lim, Kapatid spokesperson and wife of political prisoner Vicente Ladlad, said in a statement.

Among the most recent dismissal of charges that stemmed from the warrants issued by Judge Cecilyn E. Burgos-Villavert was that of the Birondo spouses – Alexander and Winona – staff of the peace panel of the National Democratic Front of the Philippines in its peace negotiations with the Philippine government. Both were arrested in 2019.

Read: A look at the invalid search warrants vs red-tagged activists

Charges against them were recently dismissed as Judge Ferdinand C. Baylon of the Quezon City Trial Court Branch 77 found ambiguities and inconsistencies on the basis that the search warrants have been issued that should have been clarified during the hearing.

Apart from the Birondos, other cases such as that of journalist Lady Ann Salem and unionist Rodrigo Esparago have been dismissed.

Lim said judicial audit must be conducted as search warrants applications have been manipulated and weaponized “to go after activists and even kill them.”

Judicial audit refers to the surveying, monitoring, and evaluating prospective, pending, or past cases or legal work as the basis for further action and recommendations, according to the National Union of Peoples’ Lawyers.

Lim said that the high court has conducted judicial audits in the past.

In 2016, the Supreme Court learned that a Malabon judge had issued too many warrants but with few returns from law enforcers carrying it out. The said judge was suspended for two years as the issuances of these search warrants were found to have been motivated by bad faith.

“The Supreme Court cannot ignore the plight of the victims of search warrant factories who have become political prisoners,” said Lim, adding that at least 76 activists have been arrested due to search warrants issued by Judge Villavert.

She added, “Most of them still languish in jail, including my husband Vicente Ladlad and the Villamor couple, Alberto and Virginia, who had taken him into their home. All the victims of this search warrant factory should likewise be released as a matter of justice.” (JJE)