Ferdinand Marcos: The hero that never was

Five years ago today, the late dictator Ferdinand Marcos was given a hero’s burial, much to the dismay of the victims of martial law. Bulatlat compiled stories on the horrors of martial law.

Let the dead bury their dead

“Cemetery of Heroes” is the English translation of “Libingan ng mga Bayani,” where burying the remains of the late Ferdinand Marcos, Sr. has been resisted for years by most of the victims of the fascist dictatorship he erected on the ruins of the Republic in 1972.

That has not always been the Cemetery’s name.

Established as the Philippine equivalent of the American Cemetery and Memorial in Manila where the remains of United States military personnel killed during World War II are buried, it was created in 1947 as the Republic Memorial Cemetery, and given its current name only in 1954, during the administration of then President Ramon Magsaysay — who is himself not buried there. 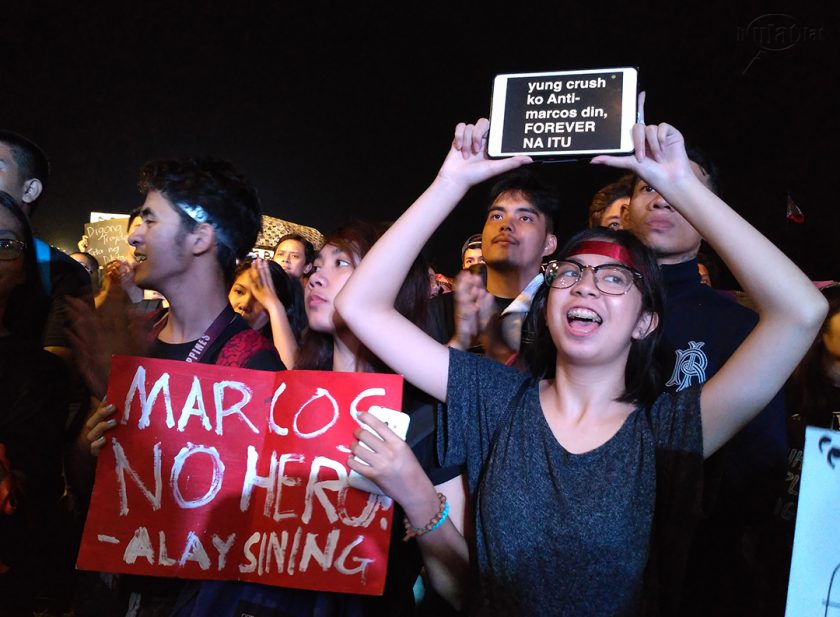 Public opposition continues to build up as the Duterte administration prepares to bury the remains of ousted dictator Ferdinand Marcos at the Libingan ng mga Bayani (LNMB) on Sept. 18.

Various lawmakers, groups and even government agencies, such as the National Historical Commission have spoken out against giving a hero’s burial for Marcos, which they said equates to an exoneration of the Marcos family’s crimes against the people, and brings them closer back to power in Malacañang.

When pressed about why he is allowing the burial of the late dictator Ferdinand E. Marcos at the Libingan ng mga Bayani despite the numerous protests, President Duterte justified his decision by saying: “He was a president and a soldier. Simple.”

Well and good if the matter is as simple as that. If Marcos were any other president or any other soldier, there could be no argument about allowing his or her burial at Libingan ng Bayani. After all, that cemetery has been reserved for them, and any soldier or veteran, whether a private or a general, has the privilege of being buried there, if the soldier or his or her family so wishes. I suppose the same is true for dead presidents.

Voting 9-5, the Supreme Court has given the go-signal for the internment of the late dictator Ferdinand Marcos at the Libingan ng mga Bayani.

SC spokesperson Theodore Te announced the high court’s decision dismissing the petitions against the burial of Marcos at around 2 p.m., Nov. 8.

The SC maintained that President Rodrigo Duterte did not commit grave abuse of discretion when President Duterte ordered Marcos to be buried at the LNMB.

Finally, the Marcoses have had their way, a hero’s burial for their despot-patriarch at the Libingan ng mga Bayani (LNMB), but without the pomp and grandeur of a state funeral that they had been dreaming of for decades. On the contrary, they had to settle for a simple military funeral and an elaborate subterfuge — false public announcements about funeral arrangements; the secret airlifting of the Marcos remains from Batac, Ilocos Sur to Manila courtesy of a military chopper; and a formidable police security cordon to prevent anticipated protesters, the mass media and the general public from entering the LNMB during interment rites.

Most dictionaries define heroes and heroism in less socially redeeming terms. A hero, says the Merriam-Webster Dictionary, is “a man admired for his achievements and noble qualities,” or “a mythological or legendary figure often of divine descent endowed with great strength or ability.”

These definitions are unfortunately based on the pretensions of “popular” culture (a basketball star can in these terms qualify as a hero. So can mythical figures like Hercules, and such US pop culture creations as Batman, who is in fact described as more than a hero, he being a “superhero”).

These definitions also ignore what makes an individual a hero in societies struggling for freedom, democracy, and authentic development, and deny the contributions to humanity of those men and women who, at the cost of their fortunes and even lives, commit themselves to the making of societies better than those that have been imposed on their peoples by colonial and imperial rule and/or by homegrown tyranny.

Over the years, Bulatlat interviewed many activists who fought the Marcos dictatorship. Here are just five of the most powerful testimonies. 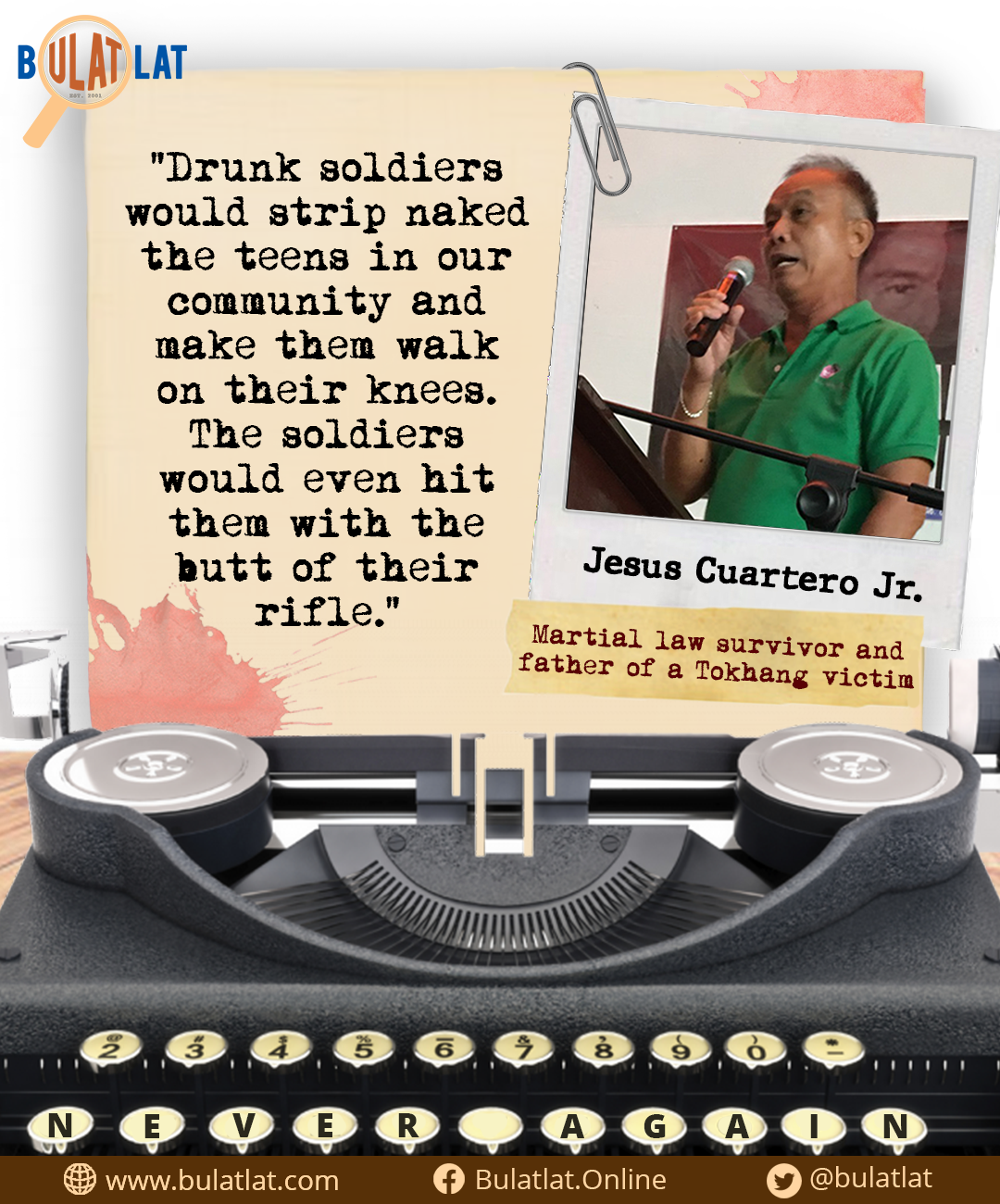 For Jesus Cuartero Jr., it seems there is no escaping the dark forces looming over the country.

He was only 18 years old when martial law was declared by the late dictator Ferdinand Marcos. Young as he was, he and his friends took the martial law imposition nonchalantly. It was not long before he learned of its atrocities – most especially the abuses of soldiers in their community in San Jose del Monte, Bulacan. 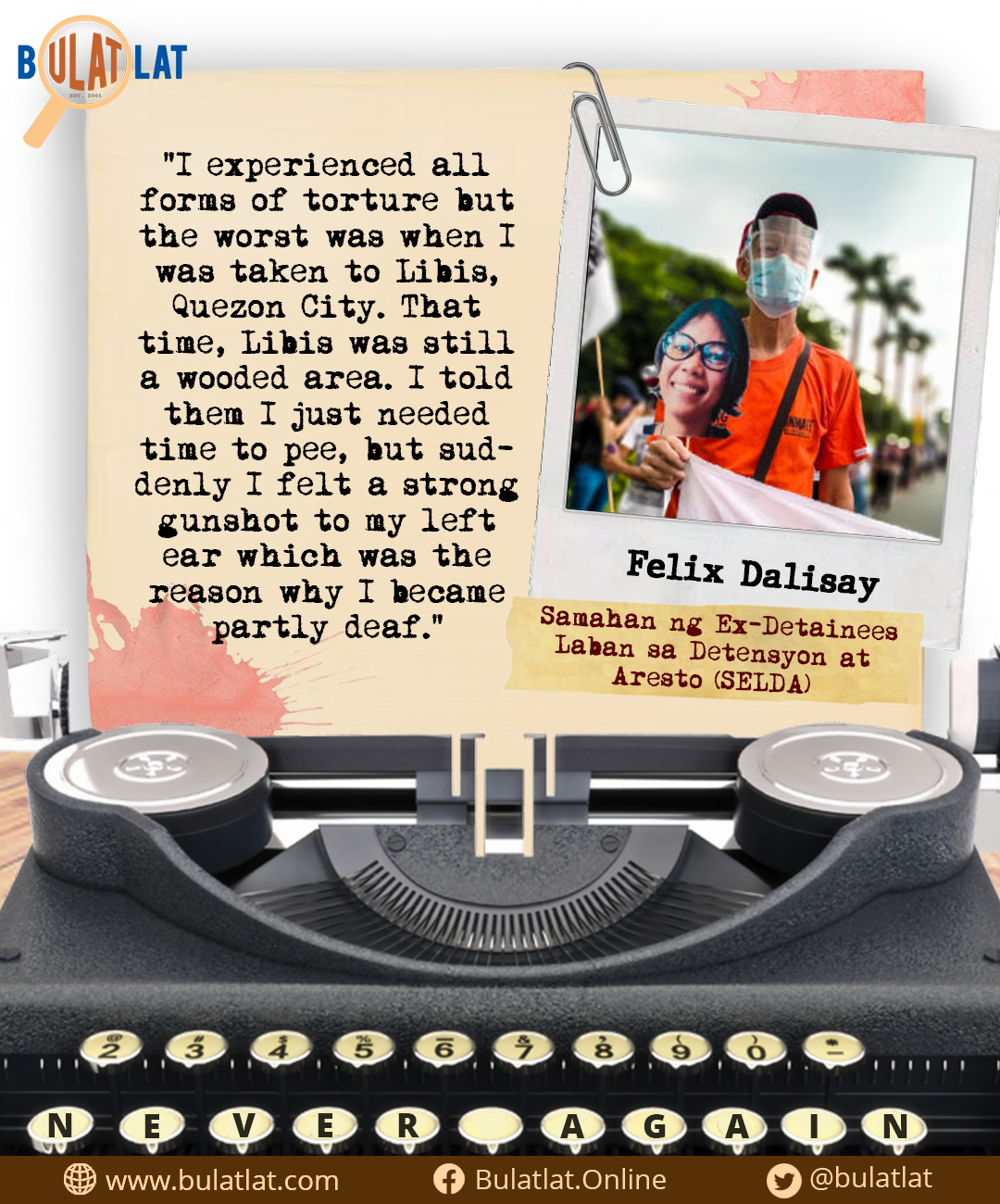 For martial law survivor Felix Dalisay, every 21st of September is a reminder of how justice remains frail. 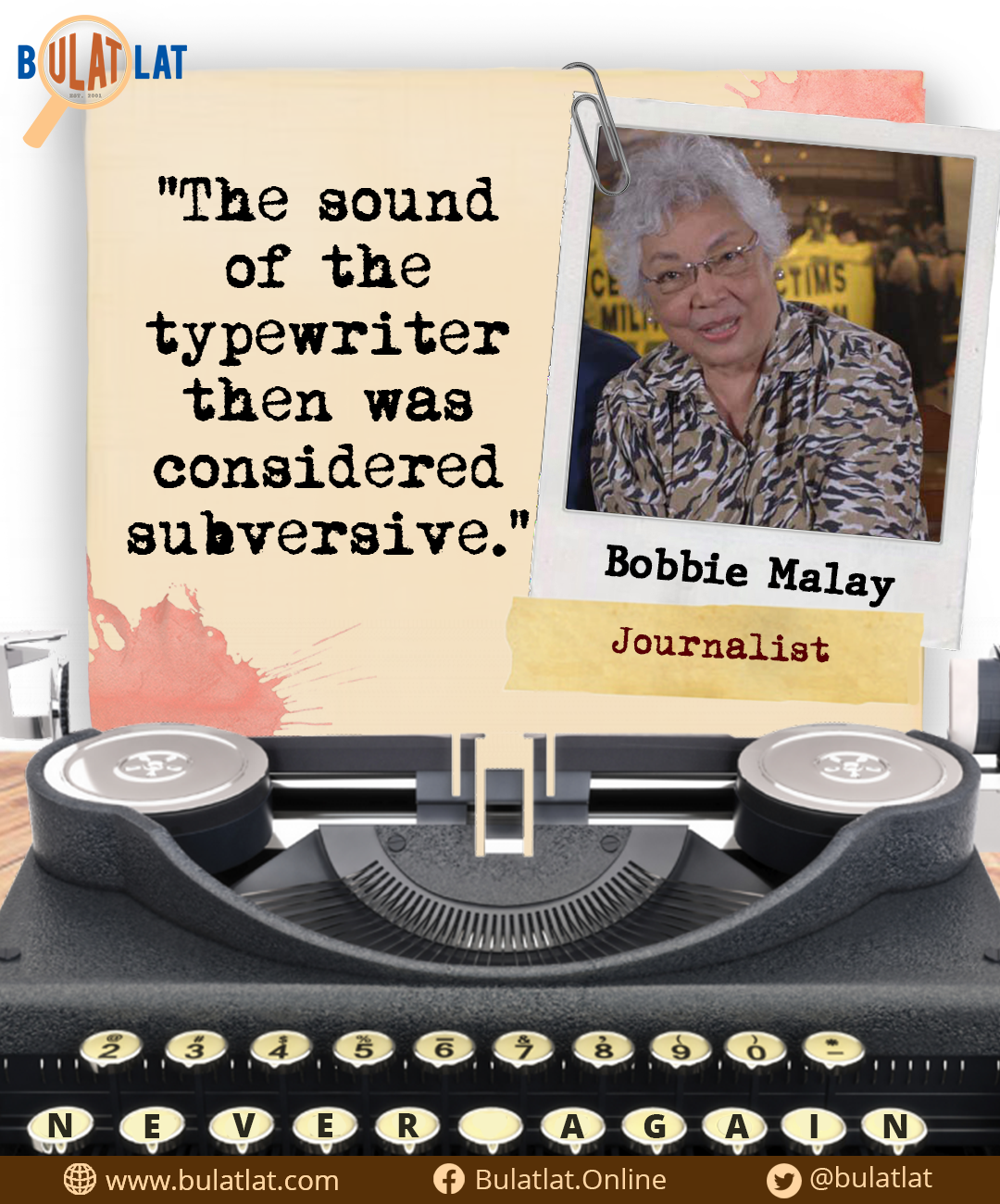 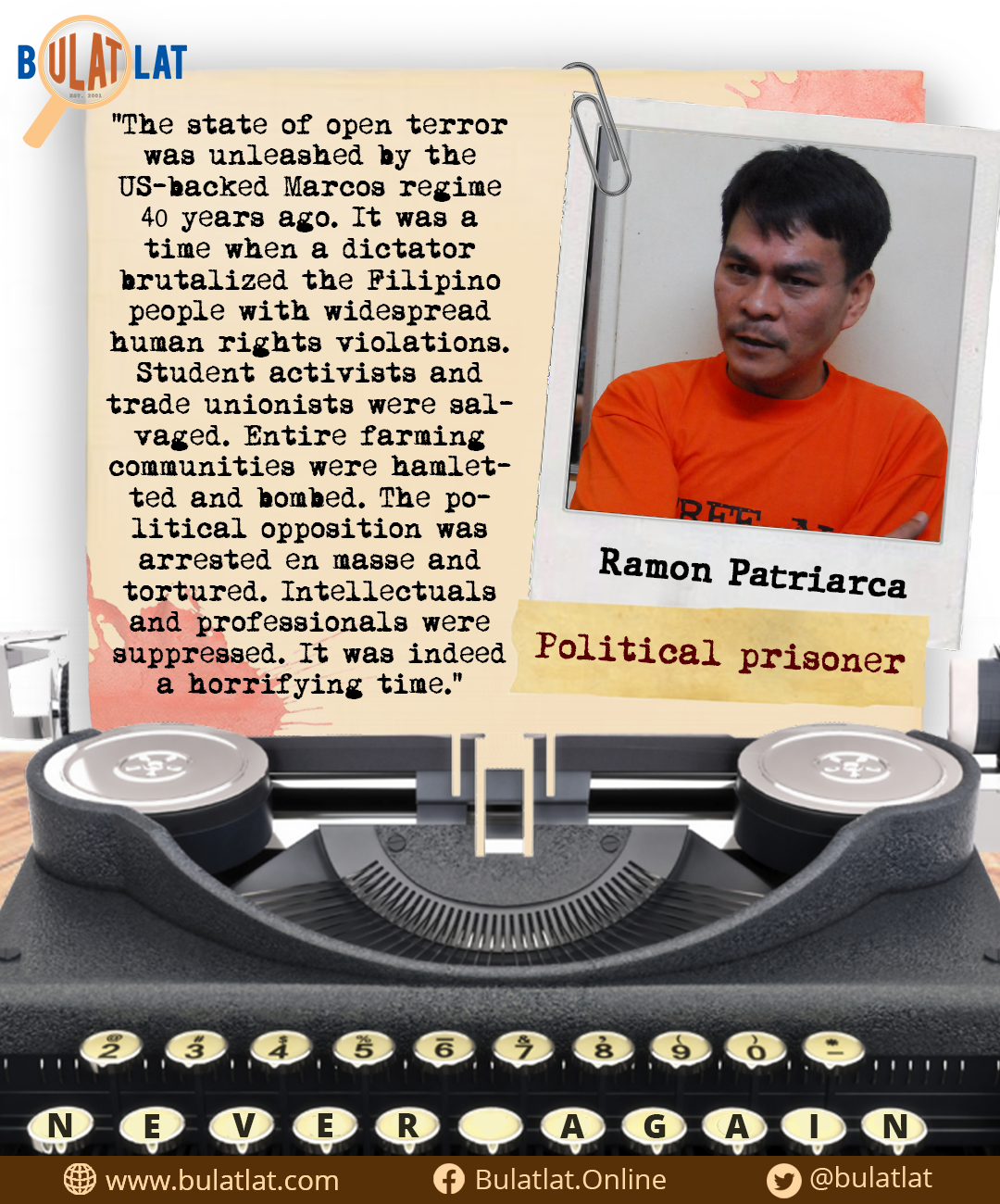 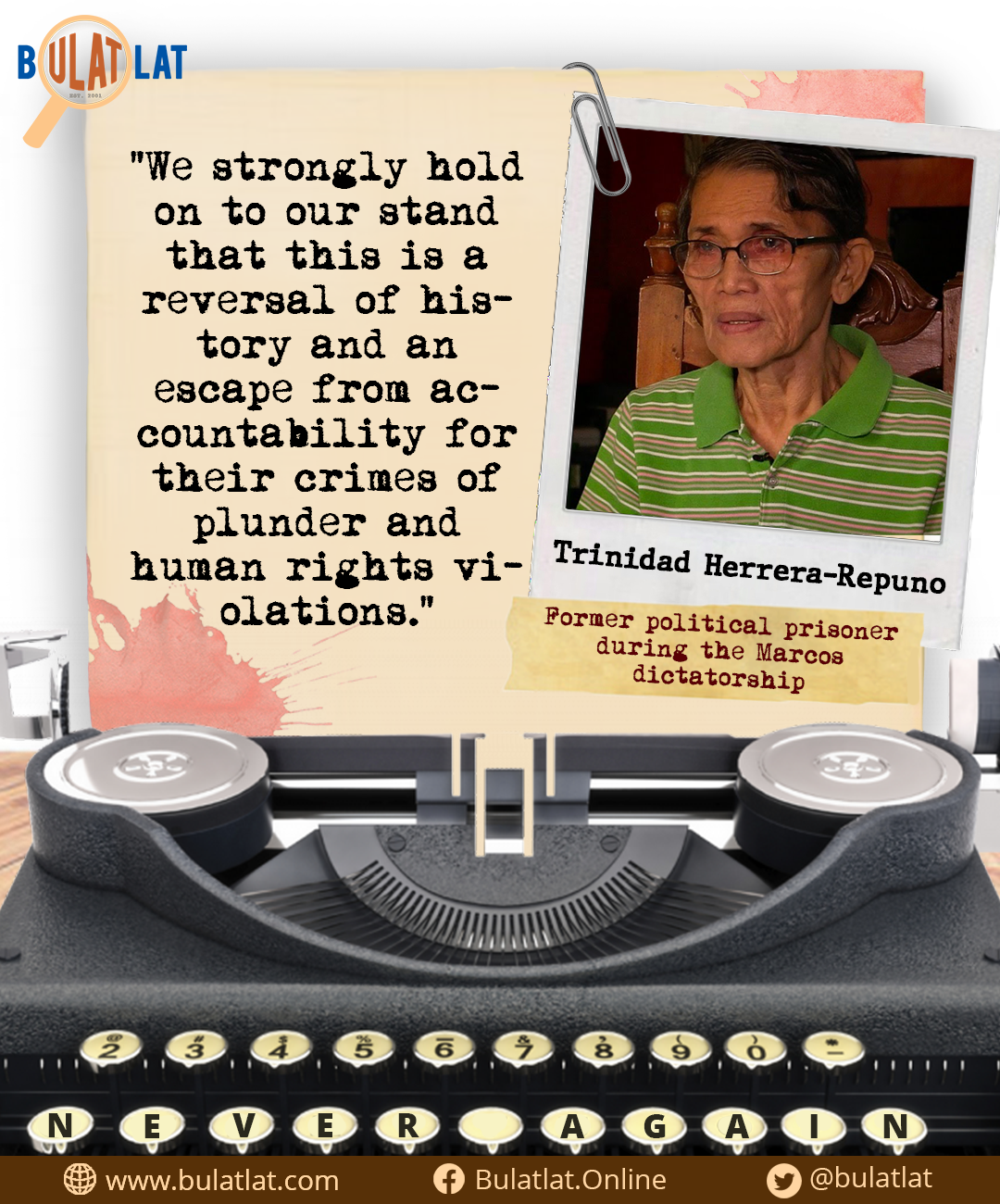 In 2018, news of the government’s compromise plan with the Marcos family emerged. This reportedly involved the Marcoses being absolved of graft and corruption cases and liability to victims of martial law.

Survivors of martial law trooped to the Supreme Court, Nov. 9, appealing for the imprisonment of the late dictator’s wife, Imelda Marcos.

Three years ago on the same day, Sandiganbayan convicted Imelda of seven counts of graft and corruption.

Imelda has remained out of jail despite the issuance of a warrant of arrest.

Last month, the son and namesake of the late dictator, Marcos Jr., filed his certificate of candidacy for the presidency.  He now faces two disqualification cases before the Commission on Elections. Filed by victims of martial law, they said that Marcos Jr. lied in his certificate of candidacy when he claimed that he was never convicted of a crime that would perpetually disqualify him from holding public office.

The Campaign Against the Return of the Marcoses and Martial Law (Carmma) said Marcos’s presidential bid “is a brazen show of disregard and contempt for the thousands of Filipinos killed, disappeared, tortured, displaced and violated, and the Filipino nation whose economy was plundered and wrecked during the Marcos dictatorship.”

CARMMA Convenor and former Social Welfare and Development Secretary Judy Taguiwalo said that the Marcos family has long been seeking to reclaim the highest position in the land even after the people ousted them from power. “And today, their shameless gall to return to the highest office in government is in full display,” she said in a statement.

My channel, my rules? The dictator’s son’s attempts at whitewashing the horrors of martial law

Following the controversial online interview of the son and namesake of the late dictator, Bulatlat revisited the YouTube vlog of former Sen. Ferdinand Marcos Jr. and his apparent attempts at whitewashing the horrors of martial law.

This is the call of the activists who fought the dictatorship of Ferdinand Marcos.

“For the past few months, we have seen the visible machinations of the Marcoses and the Dutertes, along with their rah-rah men gearing for their perpetuation in power through bids in the 2022 national elections,” said Prof. Judy Taguiwalo, former welfare secretary and convenor of Campaign Against the Return of the Marcoses and Martial Law (CARMMA).

In a virtual press conference on Saturday, Sept. 11, survivors expressed their alarm and dismay at the prospect of a Duterte-Marcos tandem in the coming elections after President Duterte accepted the nomination of Partido Demokratiko Pilipino-Lakas ng Bayan for a vice presidential run in the May 2022 national elections.

A second look at the disqualification case vs. Marcos Jr.

Human rights groups are seeking the disqualification of former senator and son and namesake of the former dictator, Ferdinand Marcos Jr. in his bid to run for president in the 2022 national elections, citing the “inescapable fact” of his conviction over tax evasion charges 26 years ago.

The petitioners from different civic and human rights groups assert that Marcos Jr. is not eligible to run for public office, over what they said was material misrepresentations, per his claims in his Certificate of Candidacy that he has never been found liable for any offense.

“…Marcos falsified his Certificate of Candidacy when he claimed that he was eligible to be a candidate for President of the Philippines in the 2022 national elections when in fact he is disqualified from doing so,” said Fides Lim, spokesperson of Kapatid, a support group of families and friends of political prisoners in a statement and one of the petitioners of the disqualification bid against Marcos Jr.