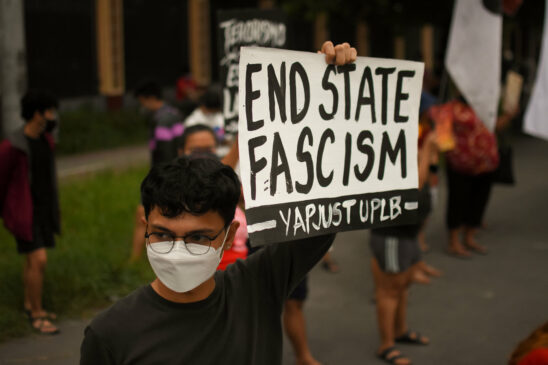 MANILA — Anticipating the release of Supreme Court decision on the controversial Anti-Terror Act (ATA), progressive groups held a protest in front of the Commission on Human Rights, Dec. 7.

Based on reports, the SC has decided on the petitions filed questioning the constitutionality of the law. As of press time, however, the high court has not released a copy of its ruling. 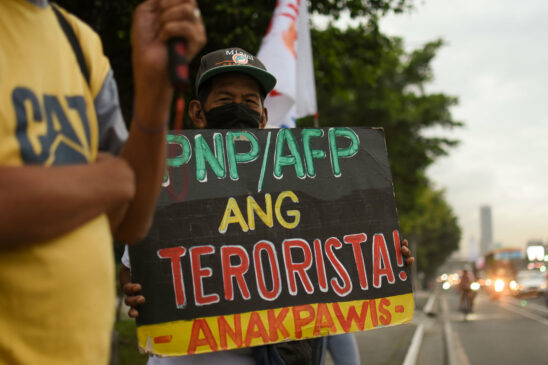 Cristina Palabay, secretary general of human rights alliance Karapatan, said that the ATA, if upheld, would only legalize the human rights violations perpetrated by state security forces. Under the Duterte administration, Palabay said 19 human rights defenders have been gunned down.

ATA allows warrantless arrest of suspects and detention up to 24 days.The law also provides powers to the Anti-Terrorism Council to designate individuals and groups as terrorists. Suspects may be subjected to surveillance, freezing of assets, among others.

READ: A look back on the Terror Law and why Filipinos oppose it

ATM. Progressives gather here in front of the Commission on Human Rights to reiterate call to #JunkTerrorLaw pic.twitter.com/emfo6NbJhD

Antonio Flores of Kilusang Magbubukid ng Pilipinas (KMP) echoed the same fear, saying that 425 farmers have already been killed under the administration. 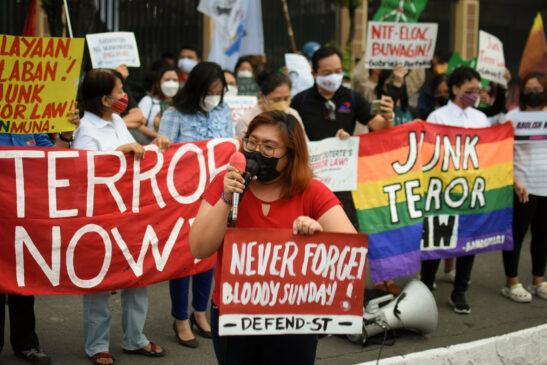 On March 7, nine activists in four provinces of Calabarzon (Cavite-Laguna-Batangas-Rizal-Quezon) were killed in what is now known as “Bloody Sunday”.

Also joining the protest was Johanna Abua, whose husband was abducted in Pampanga last month.

“It’s been almost one month [since he disappeared] but we haven’t received any news about his whereabouts. I saw what they did to Steve. He was hogtied, blindfolded and gagged. Is that an act of a decent government? Isn’t that an act of terror? They are the terrorists, not Steve who is a good person helping fellow Filipinos,” Johanna said in Filipino.

Steve went missing on November 6, 2021. He was last seen in the village of Sta. Cruz, Lubao in the province of Pampanga.