MANILA — Amid COVID-19, President Rodrigo Duterte signed into law last year the Republic Act No. 11479 or Anti-Terrorism Act of 2020. This was met with 37 petitions questioning its Constitutionality before the Supreme Court.

Among those they raised were the law’s vagueness and overbreadth, and how it could further worsen the country’s human rights violations in the name of purportedly upholding peace and national security.

Today, there have been reports that the Supreme Court ruled on the Constitutionality of the terror law. As the country awaits the decision, Bulatlat compiled its previous reports on the controversial law.

Can SC magistrates ‘seek the right balance’? A second look at the highlights of the oral arguments on the PH terror law

In this report, Bulatlat looks back on the highlights of what went on during the nine oral arguments that spanned over four months.

There has been no let-up in rights violations in the past five years of the Duterte administration, said human rights group Karapatan. These violations are the result of policies and campaigns, which the government claims will bring “peace” to the country but the actual implementation has only terrorized civilians.

The members of the Anti-Terrorism Council and their track record 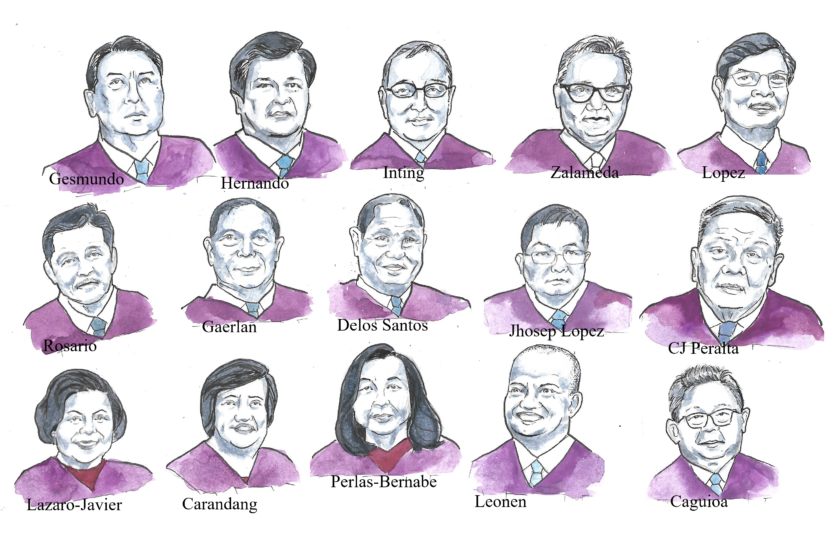 Meet the justices behind the ruling on the controversial terror law.

Petitioners against the Philippine terror law argued before the Supreme Court that the controversial law suffers from overbreadth and impermissible vagueness. During the oral arguments, they called on SC to declare the law unconstitutional even before it causes more harm than the evil it is supposed to fight.

“Once you have a terrorist label on you, they can do many things. It is the most disturbing part, how it can be used to further attack peace consultants and other people the government deems undesirable.”

The group asserted that the Anti-Terrorism Act, unless struck down by the high court, will be used to crackdown on dissent and limit academic freedom in the country’s colleges and universities.

On the third oral argument, petitioners against the Philippine terror law raised before the Supreme Court the longer period of detention without charges under Anti-Terrorism Act.

“There is nothing most fearful, most oppressive and most unjust than the way political prisoners are being treated under this regime.”

“How can the ATC, three years hence, claim to have ‘verified and validated information’ against these peace consultants when it has already been proven in court that there is none? The ATC regurgitating false assertions has been a most dangerous weapon especially in the heat of oral arguments on the terror law.”

Under the Anti-Terrorism Act of 2020, the Anti-Terrorism Council may order for the designation of an individual or organization as a terrorist. The Office of the Solicitor General, during the SC oral arguments before the Supreme Court, argued that designation will only lead to freezing of bank assets and not arrests. The law, too, has been silent on how the ATC will arrive at the conclusion in designating individuals and organizations as terrorists.

The “undue delegation of power” provided to the council, saying that the law is silent on how it will arrive at the conclusion in designating persons or groups as terrorists.

Expressing their solidarity to demand for the immediate release of Cumpio, many journalists joined the online campaign led by the National Union of Journalists in the Philippines (NUJP). They posted videos or photos of themselves saying, “Ako si Frenchie Mae Cumpio. Tagapagbalita. Hindi terorista.” (I am Frenchie Mae Cumpio. A journalist. Not a terrorist.)

“In ordinary times, red-tagging may be considered as a libelous statement. But now, red-tagging is a deadly offense. It is a threat to life, and security. I feel that mentioning our names and other candidates are uncalled for if they want to establish the evilness of terrorism because we have no relations at all to terrorism.”

IADL President Jeanne Mirer said the attacks on Filipino lawyers are in violation of international law including the International Covenant on Civil and Political Rights, the UN Declaration on Human Rights Defenders, the UN Basic Principles on the Role of Lawyers, the Convention against Torture and even of the Fourth Geneva Convention and the Rome Statute of the International Criminal Court, among others.

“To threaten our judges and lawyers is no less than an assault to the judiciary. To assault the judiciary is to shake the very bedrock on which the rule of law stands. This cannot be allowed in a civil society like ours. This cannot go undenounced on the court’s watch.”

As the country and the world suffer from the effects of the COVID-19 pandemic, Maguindanaons are made to endure much worse with the indiscriminate aerial bombings and military operations carried out in various locations in the province.

“We call on the SC, as the constitutionally appointed guardian of civil liberties and protector of the legal profession, to take immediate measures to stop these attacks.”

Critics of this law have long assailed that it will be used to silence dissent. A year on, progressives said the law has left bank accounts of non-profit and advocacy organizations and political prisoners frozen on allegations that they are financing or supporting terrorism.

“It is necessary that the relevant provisions of the international declaration are translated into a binding commitment not only to protect human rights but also those that work for the protection of these rights so that they may be able to fulfill their important role in the promotion, protection and defense of human rights and fundamental freedom.”

“An urgent and decisive action from the Supreme Court is a matter of life and death for activists and human rights defenders especially now when we are being increasingly targeted in the government’s counterinsurgency and counterterror campaign for our work and causes”. (JJE)