In PH, access to COVID-19 vaccines remains out of reach for the vulnerable

MANILA — Since the pandemic began in early 2020, the race for producing and administering vaccines has been promised by governments as one huge countermeasure that would help end the need for quarantines and lockdowns. In the Philippines, the Duterte government recited it like a mantra and imposed one of the strictest and longest lockdown restrictions in the world while turning a deaf ear to other suggested protocols by health groups to control the spread of infection.

Statements of the Coalition for People’s Right to Health (CPRH) repeatedly urged the government to not just focus its response on imposing lockdown, saying other capacities needed to defeat the pandemic, such as mass testing and contact tracing, remain far behind universally accepted benchmarks.

However, as 2021 the second year of the pandemic drew to a close, there has been no quick and efficient vaccine distribution worldwide. There is a slower and delayed vaccine rollout in low and middle income countries, said the United Nations Development Programme, leaving many countries vulnerable to “new surges of the virus and a slower recovery out of the crisis.”

Eventually, the vaccines started reaching other countries including the poor, in an uneven fashion, after the developed countries’ vaccination rates shot up almost to their estimated or targeted herd immunity.

Since 2020 various groups have been calling on the World Trade Organization to do away with the Trade-Related Aspects of Intellectual Property Rights, which public health advocates said have “ensured the extraction of superprofits through drug patents and monopoly on the industry” and has become a “barrier to vaccine accessibility,” according to the International Indigenous Peoples Movement for Self-Determination and Liberation. 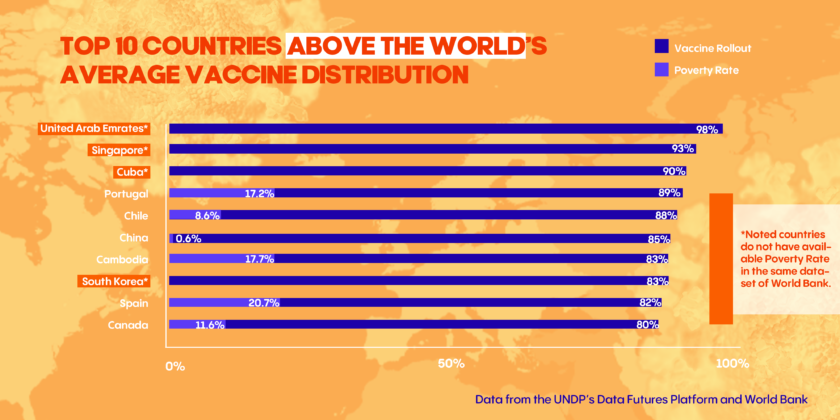 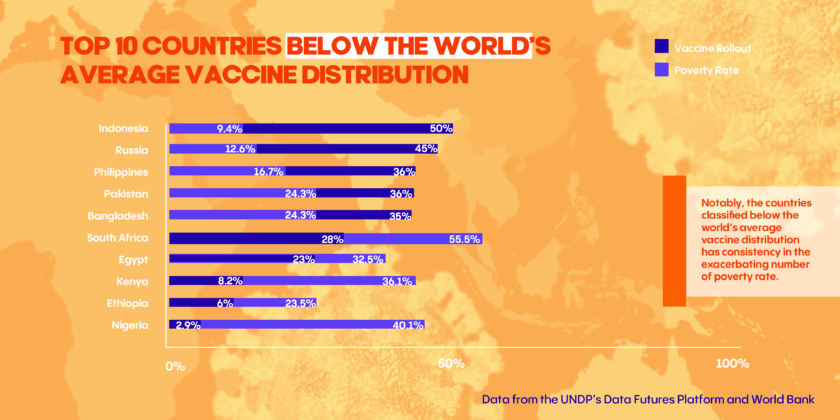 Pharmaceutical companies have been exacerbating global vaccine inequity by putting profit over people, the women’s group Gabriela said in an earlier statement.

“Any vaccine no matter its effectiveness is useless if the poorest countries cannot afford it. Allowing the virus to continually spread in low-income countries because pharmaceutical corporations withheld vaccines for profit gains can result in mutations rendering the vaccine ineffective. The pandemic will not end for rich countries if it does not end for poorer countries,” Gabriela warned.

The uneven distribution of vaccines worldwide and the recurring waves or surges of COVID-19 infection is fueling an active global struggle for justice, the campaign for a TRIPS waiver in WTO is just one of it. Not only the WTO, international formations such as the WHO are confronted with conflicting pressures toward better preparedness and responses to international health emergencies.

In the Philippines, vaccination rates have not only been slow to start but also inefficient and highly uneven when it comes to distribution. As of Dec 4, 2021, nearly 35 percent of the country is fully vaccinated, and most are in the National Capital Region.

Comparing rates by region, as of November 2, the Bangsamoro Region has the lowest vaccination rate, with less than seven percent of its population fully vaccinated and less than nine percent with the first dose. Fully vaccinated people ranged from 13.9 percent to less than 15 percent of the population of Eastern Visayas, Bicol, Socksargen, and Mimaropa.

The health department earlier explained that priority will be given to areas where there are high reports of COVID-19 infections and those considered as economically critical to the country. Targeting epicenters of the dreaded virus will supposedly “immediately” contain its transmission.

However, Joshua San Pedro, co-convenor of the Coalition for People’s Right to Health, told Bulatlat in an online interview that data on vaccine distribution in the country is anything but transparent.

Data on the vaccine distribution was treated by the Philippine government as “sensitive information,” claiming this could lead to resentment among local government executives if they start comparing the number of vaccines they are receiving, San Pedro said. He added that the government should have prioritized vaccination of areas where there is a surge of infection, referring to the ring or cocoon vaccination. 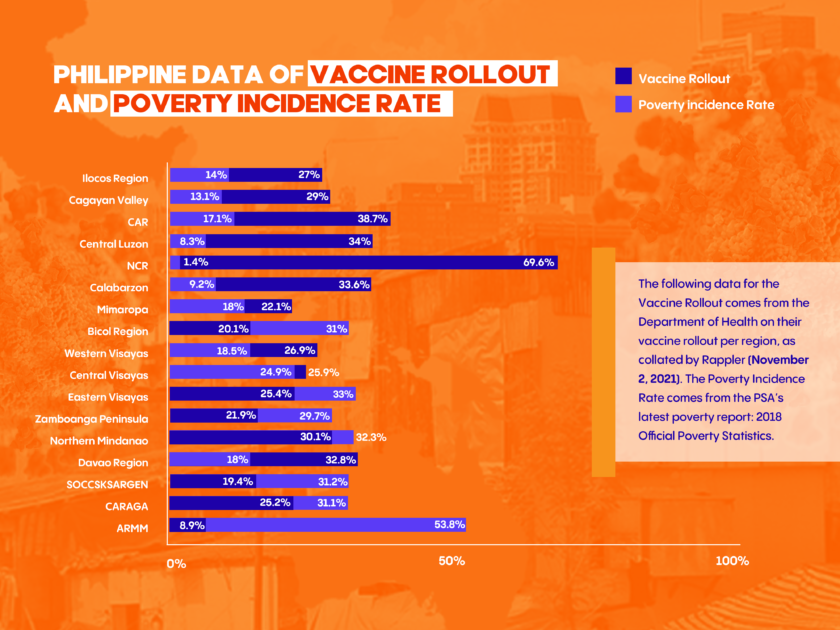 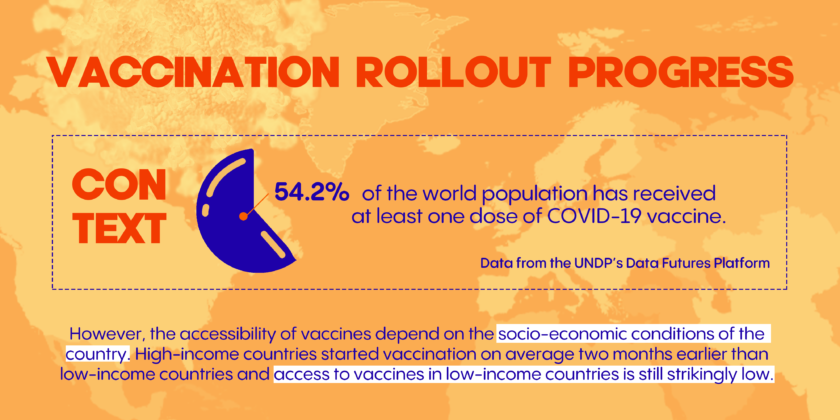 Despite the uneven vaccination program, the Philippine government is making vaccination mandatory, as seen in the labor department’s stance on workers reporting to their respective workplaces. Filipino progressives fear this could lead to discrimination.

“Inequities in health are further being revealed by the pandemic as well as in the response globally. Vaccine distribution continues to be unfair among and especially within countries, with some nations having more doses than what their population actually needs, while poorer states and provinces scramble for any vaccine. Communities languish amid increasing infections, as the privileged easily attain herd immunity and are already even giving out booster doses,” said the Coalition for People’s Right to Health (CPRH).

Local health groups decry the Philippines’ silence on the growing international calls for TRIPS waiver. “This, despite repeated government pronouncements especially earlier this year that there is very limited vaccine supply worldwide, which delays the country’s expected herd immunity. The country, too, has the “most number of approved COVID-19 vaccines, but continues to struggle in vaccinating its population,” said the CPRH in a statement.

The group of public health advocates said that while there are government officials from the health and foreign affairs departments who have expressed affirmative positions towards the TRIPS waiver, there has been no categorical statement from these agencies. Worse, other government agencies, including the country’s lead pandemic response team, are deafeningly silent over the calls.

“With a desperate situation of record-high cases and a persistent lack of technologies including vaccines, evident with the approval of 10 vaccine brands (with an additional in the process) becoming the most in the world, the case of the Philippines is perhaps the clearest example yet for a need for the TRIPS Waiver. Ultimately, no amount of regulatory approval or procurement agreements can guarantee vaccine and health equity, amid unequal distribution and massive profiteering,” the CPRH said.

Labor group Kilusang Mayo Uno KMU and the CPRH said access to vaccines is a right. But this should be coupled with correct information and informed consent. Forcing this on anyone, or discriminating others for not being inoculated (such as their work and livelihoods, and right to travel), is also a violation of people’s rights.

KMU said in a four-point demand last month that Filipino workers who are considered economic frontliners have been putting their lives and safety in the middle of a raging pandemic. For this, the worker’s group said, they should be provided with due incentives, such as the paid vaccine leaves and the passing of the proposed paid quarantine leave.

“As the pandemic response continues, the responsibility and the blame always fall on the shoulders of the people. It is the duty of health advocates to fight not only for the right to be vaccinated but also those who have chosen not to be inoculated because, for both instances, their health and well-being are being disregarded,” the CPRH said. (RVO)

This report was published with assistance from APWLD Media Fellowship