“Contractualization” in the government sector

By the Civil Service Commission’s (CSC) classification, Mang Rolly and those in similar positions belong to the “non-career personnel” category in government. They are those who were employed based on factors “other than that of the usual test of merit and fitness.”

“Unlike the remaining 89.19 percent who are career personnel or those who were employed on the basis of merit and fitness, thereby enjoying security of tenure, the tenure of non-career personnel is limited depending on the nature and purpose of their employment,” said the CSC.

Based on the 2004 Inventory of Personnel by CSC, 10.81 percent of the 1.79 million government employees are working as “non-career personnel”.

This is equivalent to 159,533 workers who, although doing the equivalent of regular work for the government, are not enjoying the full benefits of “real” government workers.

“This number may have become larger because the survey was conducted four years ago,” said Ferdinand R. Gaite, national president of the Confederation for Unity, Recognition and Advancement of Government Employees (Courage).

The highest number of non-career and career personnel working in government is in Metro Manila. Government workers are unevenly distributed among the regions as shown in the following table. (Table 1) 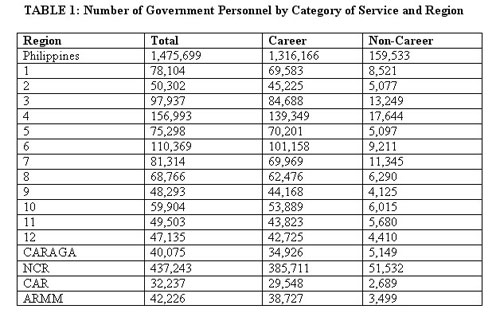