You Are Here: Home → 2009 → August → 17 → Despite Arroyo Order Cutting Some Prices, Drugs, Medicines Will Remain Expensive

Even if seriously implemented, the Cheaper Medicines Law would still fail to bring down the prices of medicines because it did not break “the monopoly control of transnational corporations on all aspects” of the drug industry. This monopoly is the main reason why drug prices in the Philippines are among the highest in Asia.

MANILA — Filipinos have long awaited relief from high prices of basic needs including that of medicines, which have been found to be twice, thrice or many times more expensive locally compared to prices in other countries such as India and Pakistan.

Ponstan (mefenamic acid), for example, can be bought in India for the equivalent of P2.58 and in Pakistan P1.29. And yet, the same pain killer is sold for P11.25 in the 10,000 or so Botika ng Barangay outlets set up by the Arroyo administration, which promised medicines for half the price compared to commercial pharmacies. Ponstan is sold for P25 pesos in these private pharmacies.

This is why, last year, Filipinos welcomed the passage of the Cheaper Medicines Law. 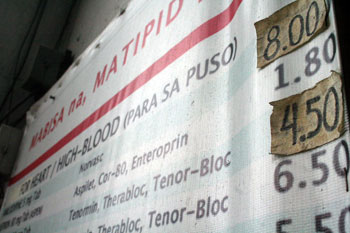 Proudly unveiled at the time by Senator Mar Roxas and the Department of Health, the law, however, proved to be a failure after a year of implementation. Medicines in the Philippines remain high despite the passage of the law.

On the first anniversary of the law, the Consumers’ Action for Empowerment (CAE) pointed out the fatal flaw of the Cheaper Medicines Law: the law, it said, was designed to fail.

Even if seriously implemented, the law would still fail to bring down the prices of medicines because it failed to break “the monopoly control of transnational corporations on all aspects of the [drug] industry.” This monopoly, the CAE said, is the main reason why prices are high. 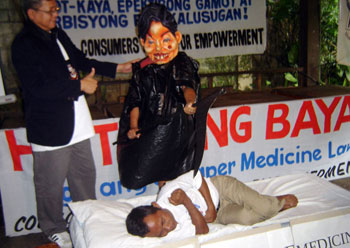 According to CAE, the Cheaper Medicines Law does not support nor strengthen the Filipino drug industry. And while supposedly supporting cheaper generics drugs, the government has not buttressed the capacity of the Bureau of Food and Drugs Administration to check the quality of drugs being sold in the market. This leaves the public vulnerable not only to fake and defective drugs but to the propaganda of big drug corporations against generic medicines.

On top of all these, those who crafted the law also scuttled proposal from health practitioners to form a regulatory board for drugs and medicines.

What remains as a potential saving grace of the Cheaper Medicines Law was the power it gave the president to impose a maximum retail price on select essential medicines, upon the health secretary’s recommendations.

Besieged by stinging rebukes for the failure of the law, Duque and Roxas, in mostly parallel efforts, tried to salvage the law. Roxas talked about reviving it with reforms or amendments. He and Duque both talked about the president’s mandate to impose the maximum retail price of essential drugs. This could reduce massively the profits of drug companies. Expectedly, it became the subject of intense lobbying, including bribe offers.