MANILA – The occupation by the military of a nonformal school for tribal children in Surigao del Sur has raised concern among officials, with the Department of Education suggesting this week that those threatened by the presence of the soldiers should seek the court’s protection through the writ of amparo.

On Tuesday, Gabriela Rep. Luzviminda Ilagan, a known advocate of indigenous peoples’ rights, filed a resolution in the House of Representatives calling for an investigation into the reported abuses by the military against students and officials of the Alcadev, a high school for Lumads in Lianga, Surigao del Sur.

Since July 13, hundreds of soldiers descended on several Manobo communities in several villages in Surigao del Sur, causing massive displacements and evacuations. According to human-rights groups, soldiers have practically occupied Alcadev and have allegedly been harassing students, teachers and officials. The military, according to these groups, views Alcadev as a communist front.

At the Department of Education on Tuesday, Lumad groups and progressive organizations told officials of their concerns for the students and residents of the affected Lumad areas.

Antonio Tinio, chairman of the Alliance of Concerned Teachers, said they fear for the safety of the students and teachers who are victims of communist labeling. He said labeling usually precedes the killings and abductions long attributed to the military. 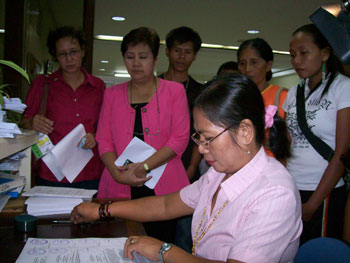 Tinio pointed out that Alcadev is a legitimate educational institution recognized by the DepEd. The Salinlahi Alliance for Children said a statement that Alcadev was a recepient of the National Literacy Award in 2001 and in 2005.

Alcadev, said Gabriela’s Emmi de Jesus “has already taken the responsibility of bringing education to places where DepEd cannot. But the government is destroying its reputation.” She pointed out that the presence of soldiers in the school endangers the students and teachers.

These groups said that the school of the Lumad students have been affected as hundreds of have evacuated from their communities and most of the students refused to attend classes at Alcadev because of the presence of the military. The schooling of over 300 elementary students and 126 high school students has been disrupted while 303 families composed of 1,795 individuals evacuated to the Lianga Municipal Gymnasium last July 18.

The military has likewise imposed a food blockade; food supply is necessary for Alcadev since it is a boarding school.

Esmeralda Macaspac of the Children’s Rehabilitation Center, an NGO, said the military has turned the school into a barracks and is in violation of United Nations protocols protecting schools and hospitals from attacks in times of conflict.

“When you feel that your security is being threatened, you should at once file for the writ of amparo in the Regional Trial Court,” said Franklin Sunga, an undersecretary of the Department of Education during the dialogue. “Since the mere suspicion of being a member of the NPA would put them in danger.” He promised to look into the Alcadev situation.

The groups welcomed Sunga’s suggestion. Salinlahi spokesperson Sophia Garduce told Bulatlat, however, that “we have to wait and see if the military will honor the writ of amparo.”

Sunga said during the dialogue that he needed to check the situation in Surigao del Sur before the DepEd can issue any statement on the situation. When he tried contacting an official in the province, the official was not around. Sunga talked to a certain Raul in front of the delegates and demanded that the DepEd regional office submit a report on the any intervention done by the DepEd on the Alcadev case.