Chavit Beating: Arroyo Denounced for Looking the Other Way

As Rachel Tiongson battles the powerful Chavit Singson, women leaders are castigating the Arroyo regime for shirking its responsibilities to uphold the law. They urge the president to “severely sanction” Singson for brutally beating up – at one point by using a tiger whip – the mother of his five children.

MANILA — In the first hearing last Tuesday of Rachel “Che” Tiongson’s appeal for permanent protection under Republic Act 9262, or the Anti-Violence Against Women and Children Law, the Quezon City court of justice has forbidden both Tiongson and Luis “Chavit” Singson to speak publicly about their troubles while the court is studying Tiongson’s petition.

That ruling came too late because the damage has already been done: the public now knows that Singson does not respect the law, that he treats people — particularly women and children – like animals, and that he uses his government position for his self-interest.

This latest scandal involving a government official – Singson is the deputy national-security adviser – centers on Singson beating up Tiongson, his estranged live-in partner of 17 years, and admitting it on national television. He even bragged about how he was able to keep tabs on Tiongson and her new boyfriend because he is with the National Security Agency. 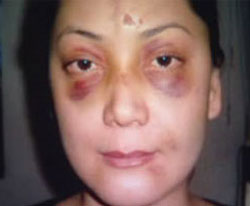 Black and Blue: Rachel Tiongson after the beating. (Photo from abscbnnews.com)

“I was still kind because I didn’t kill them,” Singson said on television. He had used the whip for his pet tigers to beat up Tiongson, the mother of his five children.

According to Tiongson, Singson had also stripped naked, blindfolded, tied, beaten and tortured her boyfriend, Richard S. Catral, 38, a former marketing employee of the ABS-CBN Foundation. She said Singson had taken photos of the naked Catral and has been showing these to his friends.

Tiongson also revealed that in trying to free herself from a “caged life” with the overly jealous Singson, she learned that Singson had been using equipment and personnel of the National Security Agency to keep her under surveillance. This was how Singson had accurately timed his visit to her townhouse just when her boyfriend was also there.

No Longer Just “a Domestic Affair”

Gabriela, the national alliance of women, has immediately sought to help Tiongson. According to Gabriela Rep. Liza Maza, aside from giving moral support to the battered woman, the group referred a lawyer to Tiongson who soon got a reprieve from another potential physical violence through a 30-day temporary protection order that currently bars Singson from coming near her or her home.

But that has not stopped Singson from trying to shred Tiongson’s reputation and threatening and accusing her of various misdeeds.

As Tiongson is pitted against an influential man who is known for having guns, goons and gold — not to mention the Arroyo administration’s gratefulness for his part in the downfall of former president Joseph Estrada — Maza said her group is also actively calling on people to help promote awareness of and put an end to all forms of violence against women and children.

Noting Singson’s “defense” where he all but labeled his ex-wife as a thief and a flirt, Maza urges everyone to also refrain from blaming the victim.

The recently signed Magna Carta on Women’s Rights places the primary duty to protect women’s rights on the state. But according to Maza, the Arroyo government is shirking its responsibility.

So far, the Arroyo government has been trying to look the other way concerning Singson. During the first few days of Tiongson’s revelations, spokespersons for Arroyo, even Norberto Gonzales, Singson’s immediate boss at the National Security Agency, said the matter is just a domestic problem that Singson must resolve himself.