In Historic Gathering, Filipino Priests Vow to Be More Active in ‘Political Realm’

They praised their fellow priests for giving the assembly examples of discernment activities, such as Father Diola’s from the archdiocese of Cebu, who discussed the successful turnout of their circles for discernment for elections, and the Reverend Albert Rabe’s, a priest of the archdiocese of Nueva Segovia, who discussed how their circles of discernment helped them shepherd the people in their parish toward understanding poverty as a result of an oppressive political system, and in the process helping to implant a “new consciousness to make people act for transformation.”

And, of course, there is the example of Father Lucero’s recent martyrdom in Samar as a result of his efforts in helping his parish defend their human rights and bring the Church closer to people in their responses against militarization.

In integrating the ideas and experiences shared in the three-day national discernment, Bishop Chito Tagle structured it into the priests’ understanding of discernment and their roles as prophets, priests and stewards or pastors, and their efforts to become “discerning presences” in their communities.

In short, whom do priests really serve and in what ways could they bring the true God to the people? As far as the first national discernment is concerned, here lies the crux of their priesthood. And maybe the continued relevance of the Catholic Church in these “trying but challenging times.”

According to Bishop Tagle, based on Hebrew Scriptures, the need for discernment arose because there were false gods. The goal of their discernment activities is to help priests continuously get to know God, because God has many faces and Catholic priests today do not want to repeat the mistakes of priests in Jesus’s time when they failed to recognize the God in Jesus.

In serving the true God, the gathered Catholic priests agreed that they want “a new brand of leadership” and that they don’t need trapos (traditional politics). To become true shepherds, Bishop Tagle pointed to the priests’ desire to also become the “counterculture for the political and economic culture that impoverishes the people.” The priests believe their ecclesiastical levels should not reflect the same cruel economic and political culture that prevails. 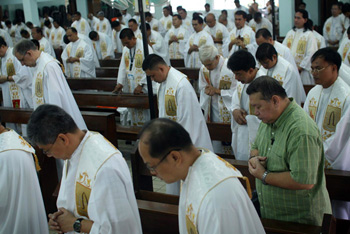 Priests and bishops gather in Makati City for a “national discernment.” (Photo by Kodao Productions / bulatlat.com)

All these are necessary, said Bishop Tagle, so the priests could perform their prophetic role of being true shepherds or pastors.

False shepherds are still around, contributing or causing impoverishment and strain of the flock, said Bishop Tagle. “They fed themselves rather than feed the sheep; they eat the fat, clothe themselves in wool and slaughter the weak in the process.”

In the priests’ functioning as “discerning presences,” Bishop Tagle said all aspects of their ministry should be prophetic, their lifestyle should be in harmony with the word of God. “We can imagine ways of becoming a church. We should also denounce and expose what enslaves society and church.”

Because achieving all these is a tall order, the priests promised to continue repeating similar discernment activities in various levels all over the country. (Bulatlat.com)