A high-level team of the UN’s International Labor Organization has proposed, among others, trainings and “continuing education” for the Philippine police, military, the judiciary and the labor department on how to respect union rights and uphold labor laws.

MANILA – For weeks now, alleged members of the military have been casing the offices in Cebu of the Center for Trade Union and Human Rights (CTUHR), a nongovernment group that documents human-rights violations committed against workers. The CTUHR’s staff has raised concern over the surveillance, knowing fully well that workers and labor organizers have been victims of harassment and extrajudicial killings perpetrated by state agents.

The case of the CTUHR is among the dozens of similar cases in which the government consider laborers, unions and those who support them as threats to the state. It underscores the continuing violation of the rights of Filipino workers.

It is in this context that the International Labor Organization, the United Nation’s “specialized agency” tasked to uphold workers’ rights and welfare, sent to the Philippines early last month a high-level team of investigators to look into cases of laborers and unionists being threatened, harassed, abducted or killed. The team also heard testimonies about violations of the right of Filipino, particularly in the country’s economic zones, where these violations are reportedly rampant.

Although the mission still has to issue an official report of their findings, they did propose certain measures that suggested the burden of improving labor relations and of respecting workers’ rights rests on the state and its apparatuses.

Among these proposals are a coordinated training for the Philippine police and the military on “freedom of association” and how this is part of civil liberties. Related to this is a similar training with emphasis on collective bargaining – a process where workers can assert their rights in negotiations with employers — within so-called “special economic zones” which are notorious for having the worst violations. 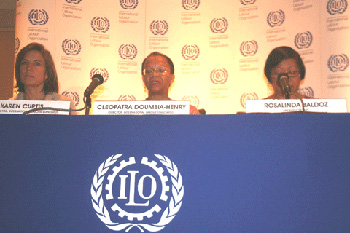 The ILO team during their press conference (Photo by Angelica de Lara / bulatlat.com)

The mission also suggested trainings for judges and lawyers on international labor standards and their use in the judiciary.

It also proposed “continuing education” for officials of the labor department, the Civil Service Commission) and other government agencies on respect for international labor standards. The ILO mission also said “social dialogue” must be promoted at all levels.

Cleopatra Doumbia-Henry, director of the ILO International Labor Standards Department and head of the ILO team during their nine-day mission here, pointed out during their press briefing that it was “not premature” to propose these measures.

She emphasized, however, that these did not mean the ILO was already linking the allegations of rights violations to the armed forces or the police, or to the judges and the government agencies. They just singled out these agencies as the most in need of training “to reduce implementation gap” and to ensure broad “enjoyment of rights” in this country.

“Everyone is part of the solution,” Doumbia-Henry explained. “No one should be left out.”

The mission’s job was to provide technical assistance — “How can we work together to get things done?” — hence their proposed trainings and continuing education so that everybody knows about the laws and jurisprudence this country has ratified in the past, and so that rights are respected and “work dignity” is upheld, Doumbia-Henry said.

If there are violations, it is everyone’s duty — especially of the law enforcers, the lawyers and the judiciary — to make sure these “do not go unpunished,” she said. There is need to investigate and prosecute, that is why it is important to train those who are in position to do these.

Allegations of killings of unionists, even of just one, are serious allegations for the ILO, said Doumbia-Henry. “Any such issue has fundamental long-term implication on workers’ exercise of their rights in a climate free from fear.”

The mission, therefore, also encouraged the Arroyo government to do or continue doing the following:

* Rapidly establish a high-level tripartite inter-agency body to monitor such allegations. These “would constitute an important first step in bringing the relevant partners together to engender greater common understanding of the concerns raised.” It would also represent a “commitment to comprehensive and coherent action and an inclusive participatory approach to taking meaningful steps at the national level.”

* Legislative initiatives to bolster the Commission on Human Rights of the Philippines in its crucial role of promoting and ensuring respect for civil liberties, including those of workers and trade unionists.