MANILA — Based on the emerging trend during the first half of election day in the Philippines, the danger of massive disenfranchisement of voters appears to loom. This is the initial assessment of KontraDaya, a nationwide election watchdog, as the reports that streamed in from callers and all their deployed teams in Metro Manila and other parts of the country reveal a disturbing trend of delayed opening of precincts, delayed delivery or failure of PCOS machines, pre-shaded or dirty ballots, and slow, even chaotic process of voting. 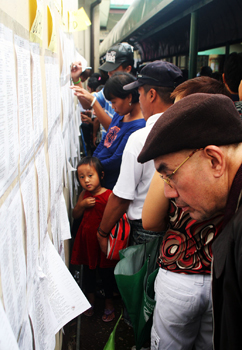 Crowd of voters looking for their names at the Manuel Roxas Elementary School in Sto Rosario, Baguio City. (Photo by Artemio Dumlao / bulatlat.com)

The combined effect of delayed opening of precincts and slow process of voting has resulted in very long lines of voters in most precincts in the country. Although there is still half a day for people to cast their vote, the election is proving to be even worse than any of the previous mock elections, said Renato Reyes Jr., convenor of KontraDaya and secretary-general of BAYAN (New Patriotic Alliance).

“The Comelec’s level of preparation is very low. We pity the teachers whom they put in the frontlines without adequate preparations. We pity the first-time voters and late registrants who failed to cast their vote because their names are not in the master list,” Reyes told the media in Filipino.

Fr. Jose Dizon, convenor of KontraDaya, narrated that when he cast his vote first thing in the morning, the lines were already very long such that after two hours, a mere 20 voters have been able to cast their votes. At the rate the ultra-slow slow voting process is turning out, he asked: “How can the 1,000 voters in our precinct alone cast their votes by 7pm?”

The bottlenecks, as already pointed out numerous times before by Kontradaya and various IT experts, lie with the lack of PCOS machines and with the BEIs (Board of Election Inspectors), specifically in the process of locating the voters’ names and in the handing out of the ballots. 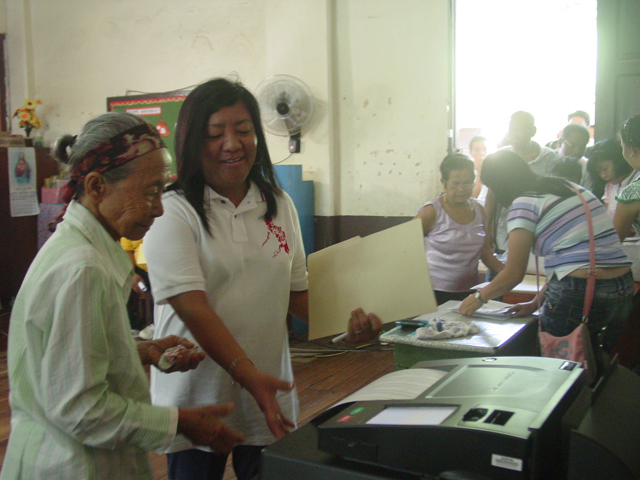 In Bangued, Abra, ballots were rejected by the PCOS machine due of unnecessary marks. (Photo by Anne Marxze D. Umil / bulatlat.com)

“Even if the Comelec has extended the elections by one hour, because they did not provide additional BEIs and additional PCOS, it will still not be enough,” said Giovanni Tapang, convener of KontraDaya.

Tapang warned that towards the end of election day, the problem would not just be in the long lines, but also in the transmission of election results from the municipality and up. “All of these are untested,” Tapang said.

“At the end of the day, if the trend continues, there’d be a lot of disenfranchised voters. If that happens, we will hold the Comelec accountable,” warned Renato Reyes. (Bulatlat.com)