DAVAO CITY – It was not the machine glitches that many people were worried about but the poll clerk’s hunt for names of registered voters and other verification procedures that slowed down the voting process in the recently-concluded elections.

At Cluster 208 of the Ceasario Villa Abrille Elementary School, Davao Today observed how the designated poll clerk had to look for the name of each registered voter in each of the six folders containing the computerized voters’ list to verify his identity to vote.

Each folder representing a precinct that made up the cluster.

Where there used to be only 100 to 200 voters in a precinct housed in each classroom in the 2007 elections, now there are close to 1,000 voters in the six cluster of precincts in the classroom with the same number of Board of Election Inspectors.

This was the result of the clustering scheme of the Commission on Elections (Comelec).

In this school in Barangay 76-A in Bucana, which has one of the biggest number of registered voters in the city, the clustering of precincts has been blamed for the snail-paced voting in the country’s first automated elections.

But oftentimes, the poll clerk would not find the name of the voter in the precinct number assignment that a voter gives him. This causes delay as the poll clerk is compelled to go over all of the six folders to look for the registered voter’s name. 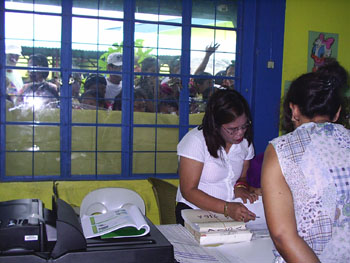 A long line of voters wait for their turn outside Precinct Cluster 207 of Cesario Villa Abrille Elementary school in 7H-A Bucana as Board of Election Inspector Chair Ester Jimenez looks up a voter’s name. (Photo by Cheryll D. Fiel / Davao Today / bulatlat.com)

This is being done as the Board of Elections Inspectors (BEI) chairperson scans the ballot, using a hand-held ultraviolet mark reader.

Having found the ballot to be authentic, the BEI chair then signs it and hands it over to the voter, with the marker and a ballot secrecy folder.

The voter then starts shading the ballot in one of the allotted seats in the classroom. The voter had to choose from the list of 400 candidates at the national and the local level.

Then, the voter is directed to go to the Precinct Count Optical Scan or PCOS machine where, upon the BEI chair’s assistance, he feeds the ballot to the machine.

For a number of times, the PCOS machine did not receive the ballots at once; in quite a few times in clustered precincts 207 and 208 in Bucana, the machine totally rejected the ballots.

As the machine receives the ballot, its counter flashes a message saying it is being scanned. Afterwards, the voting machine flashes, “Congratulations! Your vote has been registered.”

It was only then, that the voter is allowed to leave the PCOS machine area.

He is then directed to the third officer of the BEI who marks an indelible ink on the nail of his forefinger.

After which, the voter will have to go back to the poll clerk again for affixing thumb marks and signature on the EDCVL folder. At the same time, the BEI chair signs the EDCVL, each time a voter has finished part of the vote-casting process.

The entry and exit process for each voter seemed to take more time. At past eleven in the morning, only 100 of the 800 registered voters in the cluster were able to cast their votes.

This means an average of only 25 voters were able to complete the voting process in a span of one hour, contrary to the Commission on Election’s (Comelec) projection of 20 voters in eight to 10 minutes.