Is the Worst Really Over at PAL? Not Quite, as Workers Brace for More Turbulence

The dialogue brokered by government did not address the root causes of the unrest raised by the pilots who resigned. Instead, PAL will continue to implement its massive spin-off and contractualization schemes – approved by the Arroyo regime, not yet rescinded by the Aquino government — that will affect thousands of PAL’s cabin and ground employees.

MANILA – In the face of mounting calls for the government to investigate Lucio Tan’s alleged losses and abuses of his employees in Philippine Airlines, the Aquino government has retreated from further intervention in the ongoing labor disputes in the airline, suggesting that the trouble at the country’s flag carrier may be over.

After brokering a dialogue between PAL pilots and management last Thursday, Malacañang claimed satisfaction at having “opened communication lines between the two parties” that led to “a commitment from PAL management not to do the things that the pilots viewed as discriminatory.”

Without delving into why communication lines between pilots and management were shut down in the first place — the pilots lost their union to PAL’s union-busting in 1998 — presidential spokesman Edwin Lacierda told reporters last week that the government has “options on reserve,” except a takeover of PAL, should the flying public got affected again.

Lacierda said the government’s “overriding concern is the riding public” for whom, Malacañang now believes, “the worst may be over” because of the dialogue it brokered between the pilots and management.

But to the rest of PAL employees, things may not be as reassuring.

Last week, some members of the ground employees union PALEA joined the Kilusang Mayo Uno (KMU) and Anakpawis in a picket in front of PAL’s corporate offices in Makati. The group denounced Lucio Tan for “intensifying the exploitation and pushing for the layoff of workers in the airline.” 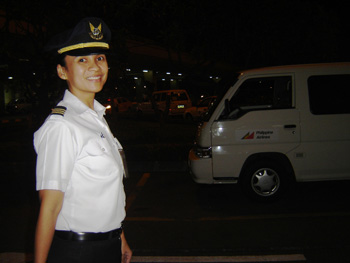 A junior pilot, who just arrived from a flight, outside the NAIA 2 airport. PAL pilots remain without a union. (Photo by Marya Salamat / bulatlat.com)

They also called on the government to investigate Tan’s profits and alleged anti-labor schemes. More protest actions of PAL unions have been scheduled next week.

“Just because the PAL management has agreed to some of the immediate demands of the pilots doesn’t mean that job security and justice have already been granted to the pilots and the majority of PAL workers,” said KMU chairman Elmer Labog in a statement. “The threat of contractualization remains very real, as 3,000 employees stand to lose their tenure, or even their jobs, soon. So everyone who works in PAL has reason to worry and protest.”

Despite the government’s brokered dialogue between PAL pilots and management, PAL pilots remain unrepresented by a union to this day. They also remain as some of the lowest paid pilots in the region, with little retirement benefits and insecure job tenure to boot, as pilots who resigned had disclosed to the media.

Without a union, pilots are also more vulnerable to gag orders, said members of PALEA who have refused to sign a waiver currently being distributed by PAL management to all employees, from pilots to cabin crew and ground workers. The waiver allegedly forbids them from divulging to anyone any information related to the company.

The mass resignation of pilots last week exposed Tan’s scheme to employ them as lower-paid contractual employees in his budget airline, Air Philippines. But the same scheme is intended for nearly half of the 7,400 PAL workforce, Labog said.

Aside from the pilots, the cabin crew union and ground employees’ union are set to talk with PAL management on different dates at the Department of Labor and Employment (DOLE). Both raised issues about PAL management’s efforts to cut workers’ salaries and reduce benefits.

The 1,600-strong Flight Attendants and Stewards Association of the Philippines (FASAP), for instance, is seeking to break the three-year deadlock of their collective bargaining negotiations with PAL management. The 3,700-plus PAL Employees Association of the Philippines (PALEA), meanwhile, wanted to start negotiating for a new CBA following the end of their almost 12-year CBA moratorium. But PAL management has so far been blocking this with plans to terminate nearly 3,000 of their members and transfer them as contractual labor to Tan’s other companies, some of which are allegedly dummy firms.

During former President Arroyo’s last two weeks in office, the DOLE gave PAL the go signal to implement Tan’s scheme. PALEA has since opposed it, with the union officials accusing then acting labor secretary Romeo C. Lagman of favoring Tan.

He said a “very conservative estimate” of more than 1,500 jobs in PAL today may already be contract-based. Anakpawis in PAL said regular PAL workers who retire are being replaced by contractual and not regular personnel. PALEA believes the spin-off will only fast-track the contractualization process already underway in the airline.